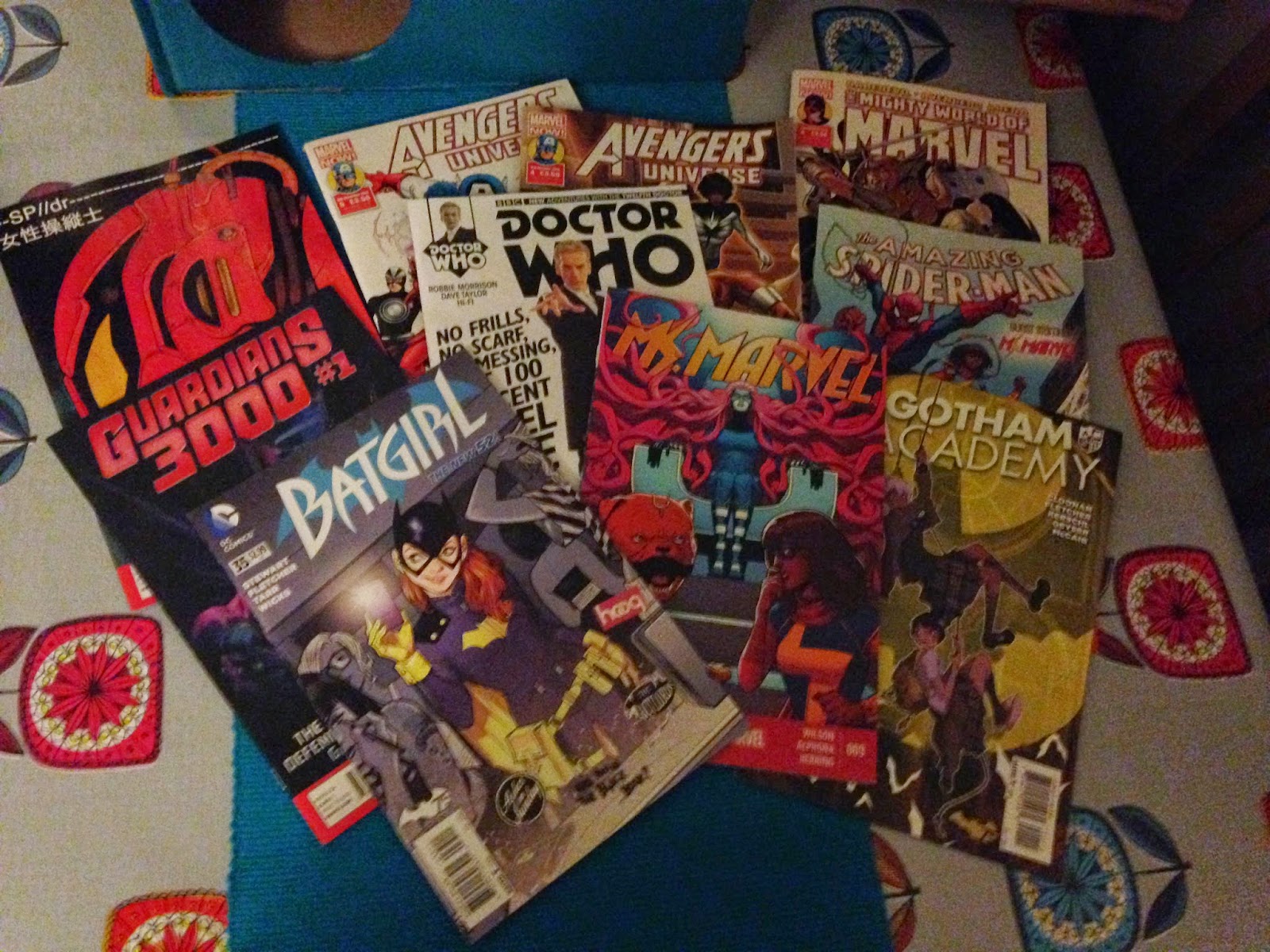 So, I'm dropping Wolverine and Deadpool for a bit and trying out Avengers Universe, which seems to tie closer to Mighty World. Also, I just really enjoy the heroes line-up on the inside cover on both these titles. It's cosmic hi-jinks aplenty this month, with Uatu the Watcher and Thanos appearing in both volumes, just to make sure we know that significant shit is going down. Mighty Avengers: "No Single Hero" is the best of these cosmic comics, with most of the Avengers out of town on a intergalactic mission, leaving Luke Cage and his Heroes for Hire guarding the city, along with Spider-Man. the Blue Marvel and Monica Rambeau/Spectrum/Photon. There's a massive alien invasion, and then frickin' Shuma-Gorath appears. It's ridiculously over-the-top, and I love it. And who the hell is "Spider Hero?" One nitpick: Spectrum doesn't know the speed of light, despite being made of it. I don't know, maybe she meant kilometres instead of miles.

Uncanny Avengers has the continuing story of "The Apocalypse Twins," which goes for equally over-the-top cosmic-ness, as Holocaust is present at the assassination of a Celestial, an event that not only potentially has terrible consequences for the entire galaxy, but is linked to a foolish mistake by a young Thor. Wish I'd caught the previous issue, actually. There's some high-concept time travel stuff here, with causes in both the past and future. Daniel Acuna's art is just lovely. The Angela storyline continues in Guardians of the Galaxy, and while this is mostly a fighty-punchy issue, there's some good interplay between the characters. I just struggle to take the goddess Angela seriously when she has her tits hanging out in every panel. Avengers Arena continues with "The Survivor," which introduces some new characters for me. Reptil really has the most ridiculous powers I've ever seen - transform, dinosaur arse! However, it focuses on Nico and Chase from the Runaways, one of my favourite series and makes for a fine issue.

Both books have a more down-to-earth strip to balance out the pan-galactic adventures. Universe #4 has an Ant-Man story that is throwaway but provides some laughs, and issue 5 has an enjoyable set-up for Young Avengers with Kid Loki trying to recruit dimension-hopping herione Miss America. Mighty World continues it's Daredevil run concerning Foggy Nelson's cancer. Combining Murdock's extreme discomfort with his sick friend - he can only barely stand the smell - with a hardluck case from his youth, it's the complete opposite of the rest of the book and really very strong stuff.

These guys all go together, in one big crossover-mess. I'm not even coming close to buying all the Spidey related titles that are apparently essential reading this winter. The Spider-Verse checklist list six or seven releases every month right through January, spread over six titles. Sorry, true believers, not with Christmas coming up. But I'm a sucker for all this parallel universe nonsense, and Spider-Man has always had great fun with these, and even though I'm cherry picking I've enjoyed this little crop.

So, Ms. Marvel continues to be the most fun you can have with Marvel each month, and while we're already kind of in-depth to the mythology, its back-to-basics approach of a precocious kid dealing with superpowers is tremendous fun to read. So, Kamala is an Inhuman, which ties into the fact that these superbeings-who-aren't-mutants seem to be set up to take the MCU by storm. Especially as they're part Kree, the alien race that have already entered the Marvel movies. So yeah, seems pretty clear, and if this means we might get a Kamala Khan movie one day, all the better. Kamala also crosses over in Spider-Man this month, which is just the most obviously perfect idea. really, Spider-Man does not work the way he once did. The writers have left themselves in the unenviable position of having to allow him development, because to not do so would be unfeasible and poor storytelling, but resorting to retconning and rewriting history to keep him grounded in his old, "typical Parker luck" ways. Frankly, Ms. Marvel is much more like classic Spider-Man than the man himself now, and this team-up works well because of it.

Spider-Man includes a back-up Edge of Spider-Verse story which covers the ongoing, and deteriorating, crisis across worlds, and introduces properly Spider-UK. This character is, rather brilliantly, both the Spider-Man and Captain Britain of his universe. And of course the Captain Britain Corps are involved; their job is to police the realities of the multiverse. It's mythology heavy, but it's good stuff. The actual Edge title, the last one in the series, is less impressive, mainly because it exists solely to introduce another character's story then cut it off in favour of the overall plot. Still, it's a very different take on Spider-Man, set in a manga world in which the very young Peni Parker is symbiotically bonded to an enhanced spider and fights villains in a mecha-suit. It's an entertainingly skewed take on the Marvel universe, it's just a shame they don't have the space to do anything with it. Still, Spider-Verse as a whole is shaping up nicely, especially now Peter Porker, the Spectacular Spider-Ham has arrived. But... they killed the Spider-Friends. The BASTARDS.

The much-awaited new Batgirl run has kicked off, and it really is as good as it was made out to be. I'm definitely a huge fan of Barbara's new costume, and the artwork here, by Babs Tarr, is just perfect. It completely fits the breathless, contemporary feel of the book. complimenting Stewart and Fletcher's writing perfectly. Particularly excellent are the frozen-screen type shots that explore Barbara's eidetic memory. So, yeah, keep Babs drawing Babs please. This is an achingly cool book, so up-to-the-minute that it hurts me in my old man bones, even as it skirts around trademarked app names. But it's also an important story, dealing with internet privacy and publicity abuse, and skirting into the whole nasty misogynistic nerd culture that's being bared to the world right now. Comics really need to address this stuff if they're going to do anything about it, so this is good stuff.

Gotham Academy is a promising new title, and while it's sold as basically being Hogwarts but in DC-land, it's better than that has a right to be. For a start, Becky Cloonan and Brendan Fletcher are actually good writers. I'm taken by Olive and Maps, and the idea of growing up in Gotham is a fine starting point for a story, especially with Bruce Wayne as your patron hanging over you. Funny with a little bit of creepy, and also boasting wonderful art by Karl Kerschl and Geyser. A very good October for DC, even as I remain utterly uninterested by the "Future's End" crossover.

Dan Abnett comes back to do for the original Guardians of the Galaxy what he did for a bunch of forgotten space characters a few years back that eventually led to a surprise blockbuster movie. It's not bad, not bad at all, but I'm somehow unmoved. Gerardo Sandoval delivers frenetic artwork that helps build the pace, and the central concept is great. A group of aliens fighting a war that seems to be a case of history literally repeating itself, with only a human clairvoyant capable of of sensing the time-loop... that's classic science fiction. But by the end of the issue I was already a bit annoyed by the spacey future slang. It's a bugbear of mine, and it really pulls me out of these things. It also feels much more like 2000 AD than anything Marvel. Not a complaint, just an observation.

Titan launch the third of their DW series, the highly anticipated twelfth Doctor run... and it's a crashing let-down. Really, this is a bad comic. Understandably they're not going down the same route as their Ten and Eleven series, but even though they need to stick with the current set-up, there's no call for something so unambitious. Robbie Morrison writes a story that is taking its cues from Hitchhikers, which is fine, but you need wit to do that, and he's in short supply. The dialogue might work with some talented actors saying it onscreen, but on the page it's just drab and unfunny. But that's nothing compared to the artwork. The pencils are by Dave Taylor with colours by someone called Hi-Fi (presumably not Steven Taylor's panda). It's just awful. The sample spread that went out last week looked OK, but that's clearly where all the time and effort went, because the rest is just shoddy. DWM's continuing serial, "The Eye of Torment" is considerably better, in terms of dialogue, artwork, ideas, pacing,,, everything really. Even if it is telling a strangely similar story to Star Trek's "Skin of Evil." But, you know, a good version.
Posted by Daniel Tessier at 23:50