WHO REVIEW: 8-8) Mummy on the Orient Express

Like Kill the Moon, Mummy on the Orient Express boasts a lurid title and an absurd premise that bely the seriousness of its approach. The set-up is fun and promises certain things, which are delivered. The beautiful but claustrophobic setting of the Orient Express itself; the shambling Mummy, excellently realised; and a murder mystery, albeit a mystery of the hows and whys, rather than the whos. However, the monster mash and the initial jokey atmosphere are as much a facade as the period trappings of the eponymous train. This is a science fiction story, albeit one with Doctor Who's usual shakey grasp of actual science, and one in which the monster is another victim and the true villain hide behind the scenes.


Even the sci-fi story, with its professorial troubleshooters, is just the setting for the core story, that of the Doctor and Clara, as they deal with the emotional fallout of the previous episode. The decision to set this episode some weeks after Kill the Moon, allowing Clara enough time to cool down sufficiently to concede to one last trip with the Doctor, grants the characters a chance to explore their relationship further. There's some great mileage to be had here, and while we hardly believe the possibility that Clara will stop travelling with the Doctor after this, watching her move from reluctant associate of the Doctor to fully endorsing his lifestyle once more is at the centre of the episode's story. Coleman and Capaldi are on fine form here, their chemistry better than ever. The Doctor's obvious discomfort when talking about emotions covers a clear and obvious affection for Clara, and her own anger with his methods belies her love of the danger and the problem-solving adventuring. This “space dad” dynamic works very well between them, and while there's still the hint of something more romantic under the surface, this aspect of their relationship suits the characters and actors very well. 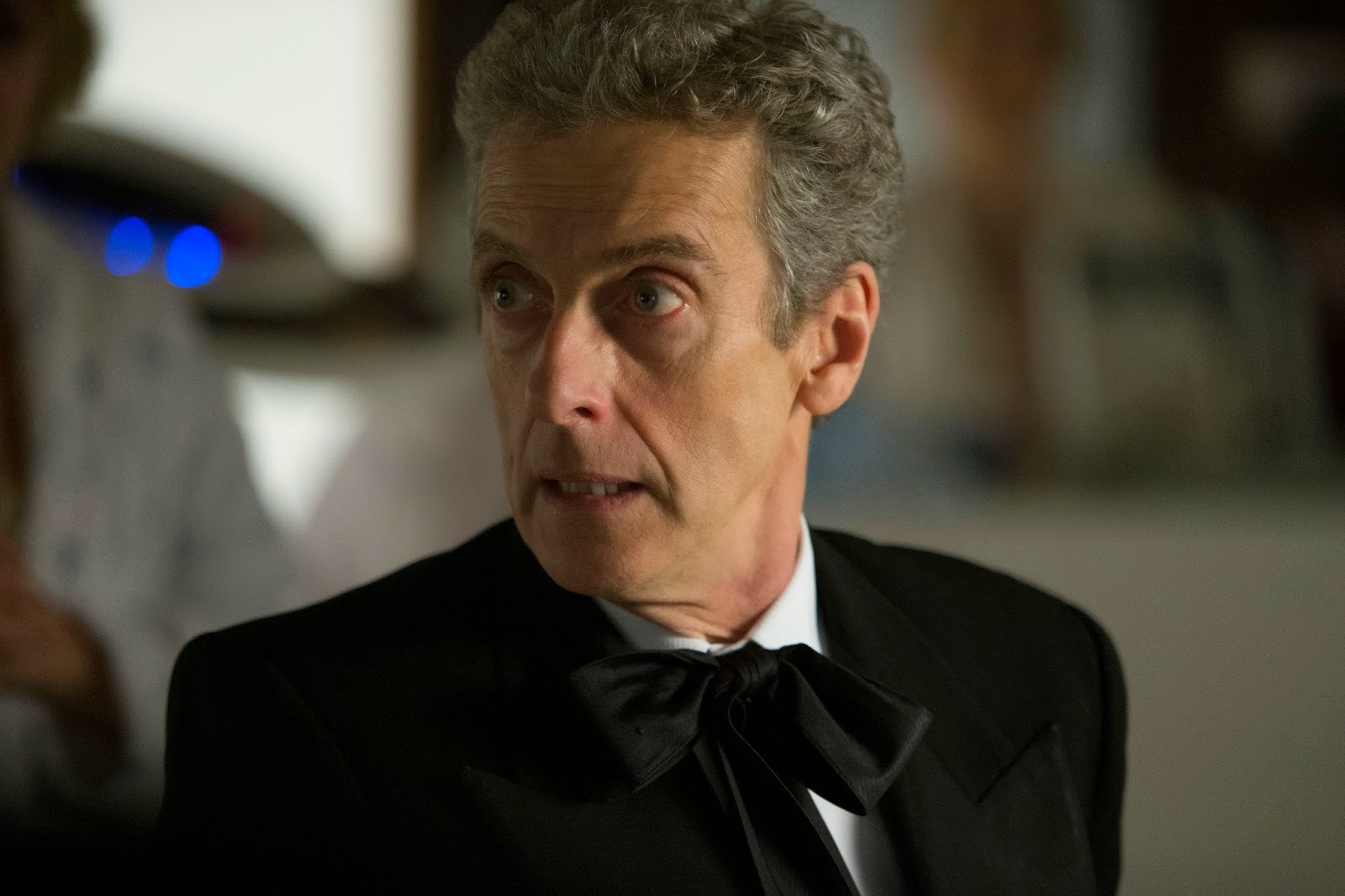 It's a pity then that, due to the structure of the story, the Doctor and Clara are separated for so long. Conversations over the phone don't have the same televisual appeal or chemistry that face-to-face encounters have, and much of their interplay suffers due to this. Thankfully, each character is given someone new to bounce off. Daisy Beaumont is a fine foil for Clara as Maisie, an ordinary woman, albeit one from an unpleasant family background, who can relate to Clara's relationship with a very difficult, very old guardian. Maisie, however, contrasts sharply with Clara, for there is little affection between her and her grandmother, and she feels nothing but fear at her experiences in this episode, while Clara, despite herself, is exilirated. Their interplay makes for some good scenes, even if there is a rather clunky moment where the characters suddenly realise they're failing the Bechdel test and comment upon it. 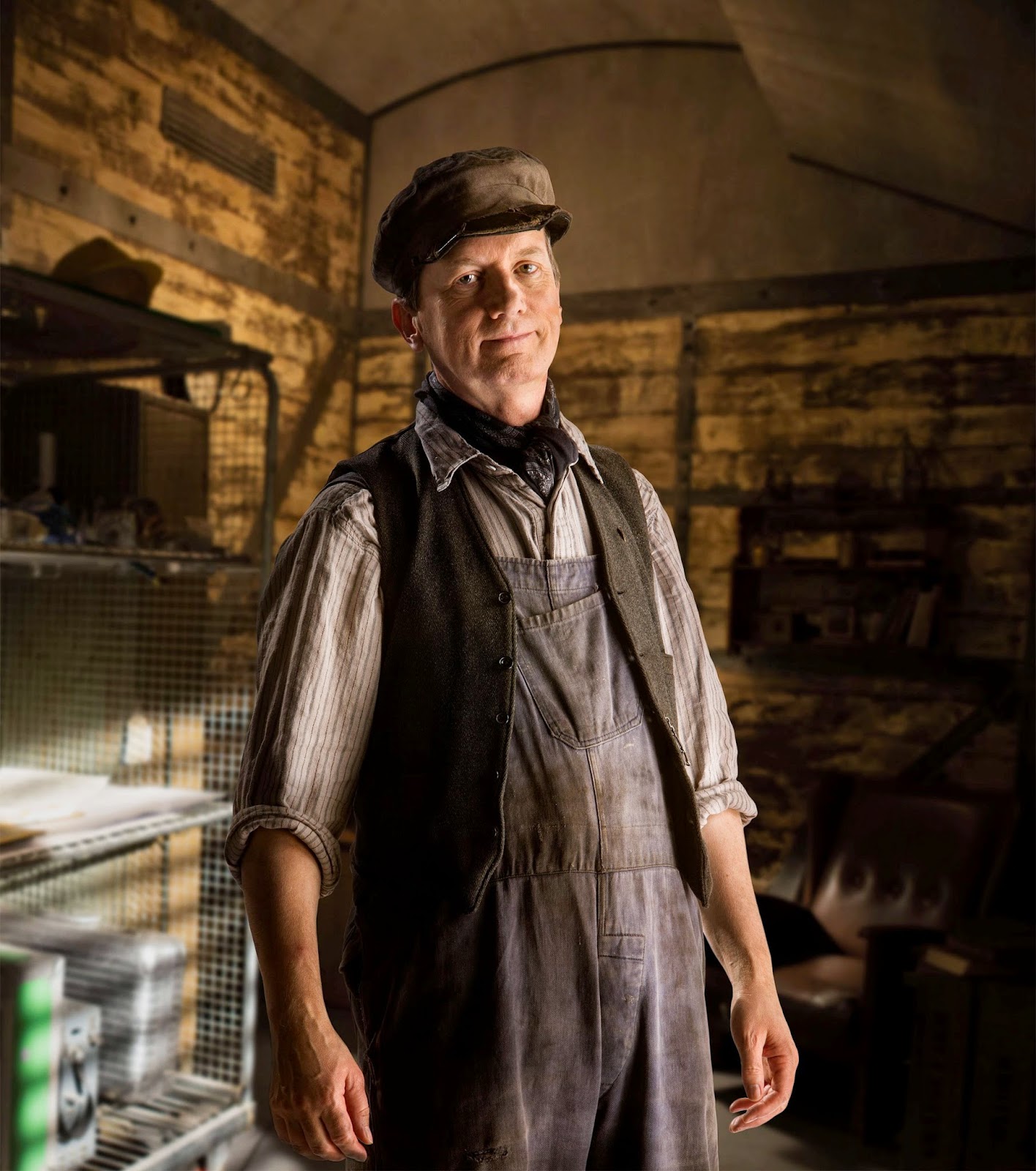 The Doctor is paired for much of the episode with Perkins, played by comedian and Doctor Who fan Frank Skinner. While it's fair to say that Skinner is not the strongest actor to grace the series, he fits the part well, and is really quite good as the intriguingly well-informed chief engineer. Indeed, so competent is Perkins that for a time he is an easy suspect for the man behind the manipulations, but he turns out to be a fine ally for the Doctor. It's also a joy watching Skinner and Capaldi on screen together, knowing that we are seeing two huge fans of the series loving their work. Being a fan of a show is not enough to warrant a place on its cast, but nonetheless, it does add a little something.


It's a beautiful production, with the train itself well-realised and filled with an impressive cast of suitably classy extras (including the obligatory scientist who looks like Albert Einstein). The inclusion of Foxes singing “Don't Stop Me Now,” very appropriate considering Clara's eventual decision, is a lovely touch. Period settings are far better with the addition of such verisimilitude, and the choice of a well-known song covered in a retro-style helps sell that this is a slightly askew version of a familiar setting. In practice, there was little to stop this episode being set on the actual Orient Express, and it wouldn't have required too many rewrites to make the script fit this. In fact, it might have forced Jaimie Mathieson to use some actual science in his convoluted explanations for the Mummy's actions. Still, what we get is a visually striking contrast between the sci-fi trappings and the period aesthetic, not least the train itself flying through space. 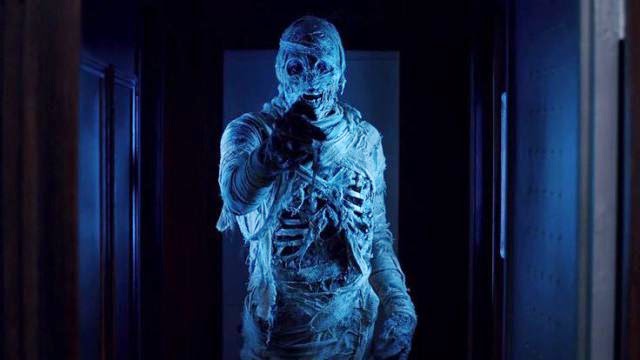 The Mummy itself is a wonderful creation of make-up and costume. We've had mummies before of course, but this is the finest example by far, exactly what one imagines when thinking of the classic movie monster. In fact, it's almost too well-realised, and was unsurprisingly omitted from early trailers for being too scary. A definite success of monster design. It's bizarre MO, killing its victims after a sixty-six second delay, provides an arresting visual cue and provides some gripping tension. However, there are only so many times it can be used before it begins to feel a bit stale. Indeed, in the latter scenes, it's the Doctor and his own heartless, even cruel interaction with the soon-to-be victims, that provides the tension. While the Doctor's final, desperate deduction of the Mummy's true nature is a fine scene, it comes across less as a calculated realisation and more as a desperate stab in the dark. While the revelation that the Mummy is an unnaturally preserved soldier fits with this season's theme of the military and its criticisms, is doesn't hold up terribly well when analysed. Equally, the Mummy's physical nature is a false mystery, since no one watching can possibly know that the bit of made-up science used to phase out the victims would take sixty-six seconds.


Mummy on the Orient Express is a highly enjoyable story, beautifully realised and with strong central performances, most notably from Peter Capaldi, who makes even the slowest, most expositional scenes tremendously watchable. Like the Mummy itself, it looks incredible and is suitably chilling, but falls apart once you look too closely.


Links: The Doctor is carrying jelly babies again, now in a rather swish cigarette case, just as he did back in the day. The Mummy's sarcophagus look brings to mind the one that acted as a time corridor in Pyramids of Mars. The Doctor has received phone calls from Gus tempting him to get involved with the mystery of the Mummy; he got one of these at the end of The Big Bang, although on that occasion, it was claimed there was an Egyptian goddess involved. A lot of us thought that was what 2010's Christmas special would involve. Instead we had four years to wait for it. Oh, and the Doctor drops in an “Are you my mummy?” from The Empty Child. “Hard-light hologram”is a term from Red Dwarf. 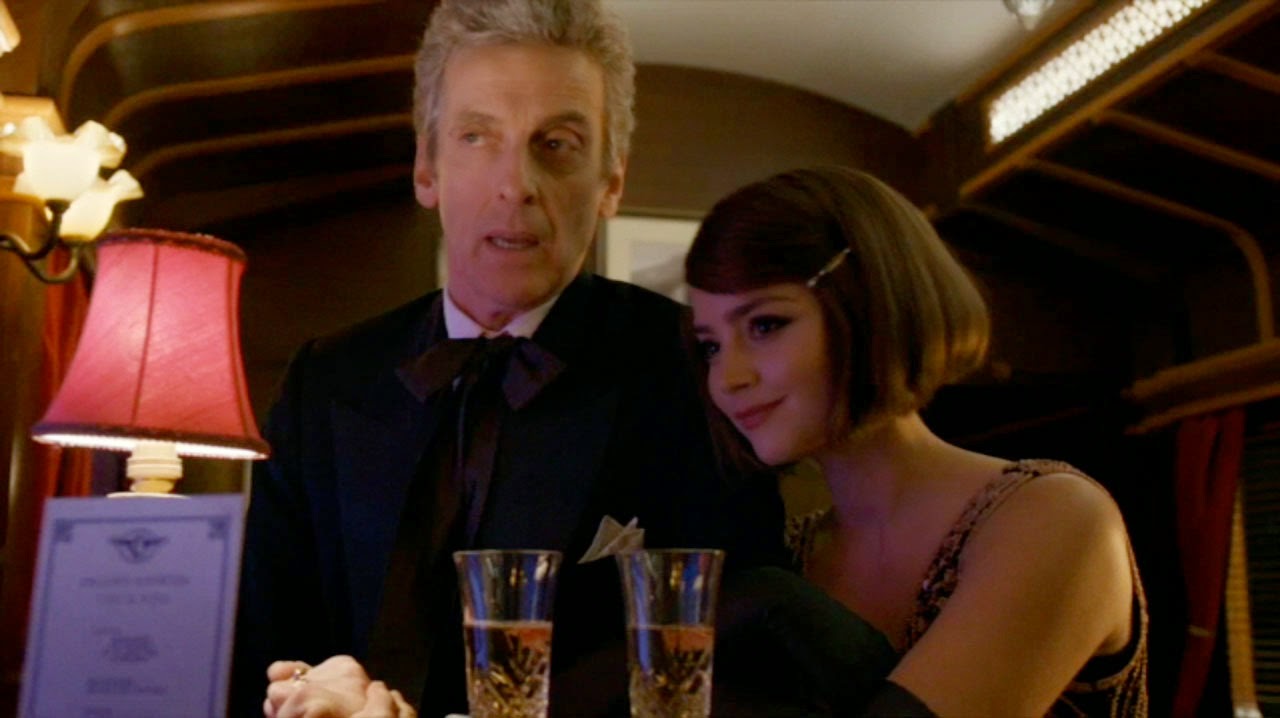 Threads: Capaldi and Coleman once again show how perfect they look in period costume, with Clara sporting a gorgeous flapper dress and the Doctor in a smart black tie ensemble with a black cravat. He's looking rather first-Doctorish here.


Planetary data: Obsidian was a planet bathed in total darkness. Thydian 4 suffered continuous acid rain. There was also a planet of shrubs, but they were all swallowed up by a black hole. The Doctor drops the survivors off on an unnamed planet with a pinkish sky. (It's probably not Thoros-Beta.)

Best line: “I remember when this was all planets, as far as the eye could see...”