WHO REVIEW: 8-6) The Caretaker

While most critics are raving about Listen, I feel that this episode is the highlight of the season so far. That said, tonight's episode, Kill the Moon, promises to be something very special. For me though, The Caretaker combines the very best of Doctor Who: humour, drama, the alien intruding on the everyday, some genuine character exploration and just a little bit of continuity for the geeks. At first glance, it appeared that this was going to be a third episode from Gareth Roberts in the same vein as his two Matt Smith stories, The Lodger and Closing Time. There are, of course, definite similarities. In all of these episodes, the Doctor arrives in contemporary England and sets himself up in a ordinary human situation in order to investigate and neutralise a hidden alien threat. However, while the two Smith episodes were essentially silly romps with a heartfelt message, The Caretaker is, beneath the daffy robot and the sitcom humour, quite a harsh critique of the Doctor's character and ethics.


It is, of course, very funny, primarily down to the performances of the cast. While the script does deliver some blinding lines – some of them surely the work of Moffat rather than Roberts, his style very recognisable now – much of it is quite low-key. Roberts has faith in the cast and the director to provide the humour and pathos in what is a much subtler script than his previous outings. Although there are exceptions; the joke about the Doctor mistaking young Adrian to be Clara's boyfriend because he holds a resemblance to his former self is brilliant, but it is hammered home long after it's run its course. On the whole, though, this is a fine script, brought to life by a cast on the top of their game. Jenna Coleman doess best in scripts that focus on Clara's character, rather than her mystery or her adventures. In fact, the adventuring is dealt with in an opening montage and then done with, allowing us to see what her character is actually like away from Zygons and robot sheriffs. Equally, Samuel Anderson is at his best here, finally given an opportunity to play Danny outside of deliberately farcical scenes. The chemistry between the two actors helps carry this whole episode, which is as much about their characters' relationship as it is about the Doctor. Bizarrely, some fans have complained that the series still contains too much “luvvy-duvvy” stuff. In fact, almost all of this has taken place offscreen, and we now join Clara and Danny having developed from dating to a fully-fledged relationship. Their easy chemistry sells this, and the episode wouldn't work without it.


Another observation from fans is that there is a definite feel of The Sarah Jane Adventures to this episode, and I can't disagree. For me this is a fine thing; at its best, SJA was an excellent children's programme, and while this episode deals with some adult themes, its setting gives it the feel of some of SJA's best. Standing out is Ellis George as Courtney Woods. The “disruptive influence” works far better than previous attempts at similar characters such as Angie in the latter part of series seven and Kelsey in the SJA pilot. When I read that Courtney was to be accompanying the Doctor at the end of this episode my heart sank; by the end of the broadcast, I was delighted to have her aboard. Such swagger. Also reproducing the feel of Sarah Jane is the monster of the week, the scuttling robot the Skovox Blitzer. There's no need for a complex villain in an episode like this; it merely needs a threat to motivate the plot far enough to force the characters to interact. That said, the Blitzer is not the most impressive beast, and while it's has a great design, it appears too prop-like onscreen to really take seriously as a credible danger. Nonetheless, it does its job. 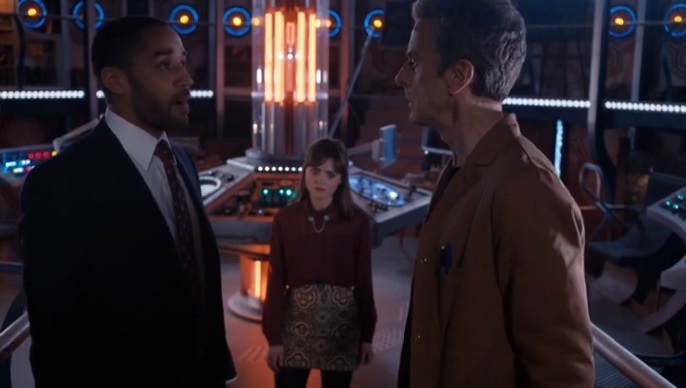 Central to the episode, though, is the Doctor, and how both Clara and Danny interact with him. This is the biggest difference between The Caretaker and Roberts's previous “real world” episodes. The eleventh Doctor was weird, but charming, amiable and fundamentally likeable. The harshness of the Doctor's character was there, but hidden beneath a smiling veneer. The twelfth Doctor is far more raw, his edges more exposed. He doesn't become comically annoyed, but aggressive and furious. His faux pas are not endearing, but infuriating. His exclusion of Clara from the inner working of his plan for so long belies his great arrogance. He arrives in Coal Hill to stop the Blitzer, which has been attracted by the copious amounts of Artron energy in the area, something to which the Doctor has contributed significantly over the years. This version of the Doctor has displayed a vicious hatred of the military, and no more so than here. He immediately writes Danny off as incapable of being anything more than a P.E. teacher due to his background as a soldier, and seems to have more sympathy for the automated weapon he is there to disable than a human being.


In some ways, the Doctor's ribbing of Danny isn't dissimilar to his mocking of Mickey the idiot back in series one and two; goading the man to prove himself good enough to be the partner of his chosen travelling companion. Here though, it comes across as far more vindictive, with little of the good-natured sparring that characterised the ninth and tenth Doctor's treatment of Mickey Smith. The fact that both are played by black men hasn't gone uncommented upon. While I sincerely doubt that this was in any way an intentional inference, the fact that we once again have an older white male belittling a young black man and calling him stupid has understandably offended some viewers.


Naturally, Danny proves himself capable of being part of Clara and the Doctor's world, despite the Doctor refusing to give him even the slightest chance to redeem himself in his eyes. His refusal to listen to Danny during the crisis is pure hubris. Danny makes the quite reasonable suggestion of evacuating the school and the Doctor refuses to even consider going against his own plans. The fact that Danny's suggestion of bringing the military is not met with an explanation for why it would be dangerous, but merely angrily dismissed, is telling. The Doctor takes pride in explaining his plans to Clara; he can't even be bothered with Danny. All of this builds up to, and develops from, the standout scene of the episode, where Danny confronts the Doctor. It's an electrifying scene, with the Doctor's arrogance, self-importance and hypocrisy laid bare. Danny recognises the Doctor for what he is: an officer. “I'm the one who carries you out of the fire,” says the soldier. “He's the one who lights it.” It's a scathing attack, and one that the Doctor cannot retaliate against, not least because it reflects his own words in his warrior incarnation. “Great men are forged I fire. It takes a lesser man to light the flame.” The Doctor's hatred of the military surely stems from his own guilt for his actions during the Time War as much as anything.

For all the silliness, comedy and daft asides about otters, it's this one scene that makes the episode work so well. Despite being a cheap comedy episode with a mediocre monster, this is one of the most powerful critiques of the Doctor's character yet.

Further Adventures: We see glimpses of adventures with the Doctor and Clara, including on a desert planet with two suns and somewhere made out of corridors. They also plan to meet some fish people, a probable reference to the second Doctor story The Underwater Menace (or possibly the eighth Doctor audioplay The Stones of Venice).

Links: The motto of Coal Hill School is “A Spirit of Adventure,” a rough quote from the Doctor in the first season story The Sensorites. Makes sense, seeing that Ian Chesterton is now the governor. Wish we could have had a cameo though. Maybe a story with him next year? Pretty please?

Of course, Coal Hill School is where the Doctor's granddaughter Susan was schooling right back at the beginning in An Unearthly Child. The Doctor returned there to confront the Daleks in the 25th season opener, Remembrance of the Daleks. The Daleks were only there after something the Doctor had left there on his first visit. He also returned to the Shoreditch area in his sixth incarnation in the story Attack of the Cybermen. Still think the Artron energy is not his fault?

After a short break, we get another glimpse of Missy and her mysterious realm, this time with Chris Addison as one of her underlings (employees? minions?) It's an effective, intriguing scene, albeit one that is very much tacked on the end of an otherwise well-structured episode.

Threads: God, he's wearing that awful jumper again. Really Doctor, it's not a good look for you. The brown coat gives him a slight resemblance to his tenth self (well, very slight).

On a personal note: Former St Paul's RC School students, did you not find that Adrian looked less like the eleventh Doctor, and more like a young Bill Haselden? It's uncanny. Give the man a pipe and he's there. Similarly, the Blitzer's drone of “Problem... Solution,” didn't half remind me of Gary Archer.

Best line: “Human beings have incredibly short lifespans. Frankly, you should all be in a permanent state of panic.”
Posted by Daniel Tessier at 15:05