Leonard Nimoy died just a few days ago. His loss is felt keenly by so many of us. Through Star Trek, he reached millions as the wise, complex character of Spock. In what could easily have been, under a less talented actor, a monotone, robotic performance, Nimoy took the wellworn character of the emotionless alien and made him into a charismatic, compassionate and witty character, and, in time, an icon. Half-human, half-Vulcan, Spock spent much of his time in the Star Trek series attempting to better himself as a Vulcan, to live his life by logic and rationality, and to bury his emotions and his human side. Over time, his understanding and acceptance of humanity improved, as his friendship with his shipmates grew. Nimoy's ownership of the role can be evidenced by the fact that he created two of the concepts that everyone recognises as Vulcan: the V-shaped Vulcan salute and the legendary Vulcan nerve pinch. As Spock, Nimoy was part of the triumvirate that made Star Trek the beloved series it remains today, along with DeForest Kelley as Dr. McCoy and William Shatner as Captain Kirk. Sadly, of these three, only Shatner remains.


He was the only actor to have appeared in every episode of the original Star Trek series and its animated spin-off; Shatner came close, of course, but did not appear in the original pilot episode “The Cage” or the animated episode “The Slaver Weapon.” Early plans for the sequel series, known as both Star Trek II and Star Trek: Phase II, were altered to feature a new Vulcan character named Xon after Nimoy declined to return. However, once these plans advanced to becoming feature film productions, Nimoy signed up again, not only appearing as Spock in the first six Star Trek movies, but assisting with the writing of four of them, and directing both Star Trek III and Star Trek IV. In the course of these films, Spock went from contemplating the complete purging of his emotions, to fully accepting his human side and the strength it gave him. He gave his life for his friends, returned from the dead and continued his adventures in Starfleet. This wasn't the limit of his time in the role, of course; he also appeared in two episodes of Star Trek: The Next Generation, now in the role of ambassador, and in both of the most recent movies, playing the aged “Spock Prime” opposite Zachary Quinto as his alternative, younger counterpart. Plus, there were the interviews, the convention appearances, the audio productions and voiceovers for computer games, including the 2009 launch of Star Trek Online.


His relationship with the character was strained for some years, with the career defining role coming to overshadow much of his other work. Nimoy was an accomplished director, musician and poet, yet was, and always will be, best remembered for his time as Spock. The first volume of his autobiography, published in 1977 during the period in which he was distancing himself from the series, was entitled I am Not Spock, a clear indication of his feelings on the situation. By 1995, after the success of the Star Trek movies, his attitudes had changed, and he wrote I am Spock, in part to undo the damage he felt he had caused with his first book, which many considered made him sound bitter about the character that given him such success. For me, and so many others, Leonard Nimoy will forever be Spock, and while I will always enjoy and admire his roles on series such as The Outer Limits and films including Invasion of the Bodysnatchers, and his late career roles and send-up appearances (such as his wonderful guest slots on The Simpsons and Futurama), it is for his time on Star Trek that I will best remember him for.


What follows is a rundown of my top ten moments for Leonard Nimoy as Spock. There was so much more to the man, of course. Visit iReckon for E.G. Wolverson's top picks for Not Spock. 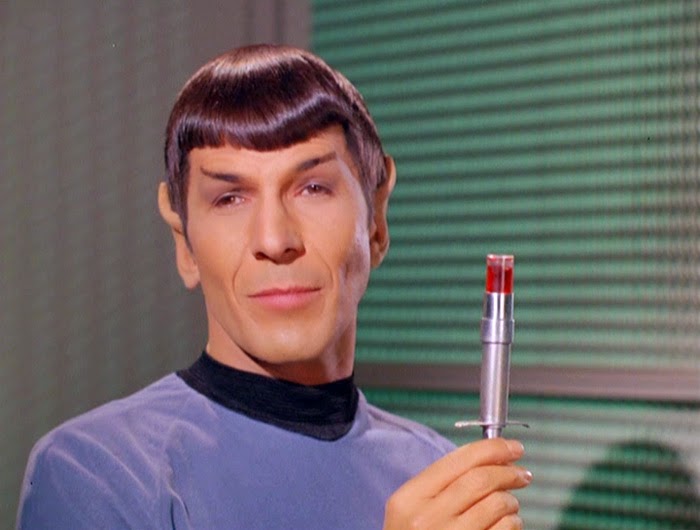 10) “Return to Tomorrow” - Spock is possessed by Henoch


A rare opportunity for Nimoy to play a different character in Star Trek, as Spock's body is used by the mind one of the last three survivors of a dead planet. Henoch is charming, sexual and manipulative, and Nimoy plays the villain with aplomb.


A classic episode, which sees Kirk split into two beings by a transporter malfunction: one timid and weak, one strong but vicious. Faced with the wild Kirk, Spock is forced to disable him. Though the script called for Spock to pistol whip his captain into insensibility, Nimoy objected, considering this too violent for Spock. He came up with an alternative, and the Vulcan nerve pinch was born.


The first Star Trek movie sees Spock on a journey from his coldest ever persona to finally accepting his human side. He begins the film on Vulcan, coming close to fulfilling the ceremony that will finally purge him of all emotion, only to sense the call of V'Ger, the powerful space intelligence, which stirs his human side. Returning to the Enterprise and his friends, he remains utterly passionless – until communion with V'Ger causes him to realise what they both are missing. Cold knowledge and logic are nothing without emotion. As Spock finally come to terms with his own nature, so Nimoy returns to the role he had sought to leave behind, and embraces it.

An episode that has pervaded into popular consciousness, “Mirror, Mirror” utilises and defines a classic sci-fi trope: the parallel universe. Kirk, Scott,y, Bones and Uhura are cast into an alternative world in which they serve on the Imperial Starship Enterprise, where the counterparts of their crewmates are brutal, selfish and cruel. Then there's the Mirror Spock, complete with goatee beard. Spock always had a touch of the devil in his looks, and never more so than here. The alter ego with an “evil beard” has become a shorthand in sci-fi, fantasy and comedy, but both the script and Nimoy's performance are far subtler than that, for Mirror Spock is not an evil man, but as coldly pragmatic and logical as his counterpart in the regular, more peaceful universe.


Nimoy's involvement in the reboot could have been little more than a cameo and some handy exposition, but what we got was the welcome return of an old friend. His earlier scenes, in which he helps his friends-to-be Kirk and Scotty onto the right path work well, but it's his final meeting with his own, younger self that sticks in the mind most. The contrast between the earlier Spock – repressed, superior, yet naïve – and his older self – wise, content and comfortable with his human side – is fascinating. 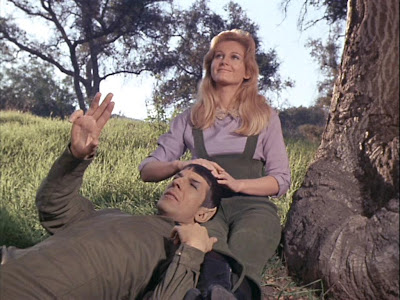 A wonderful exploration of Spock's past and the human side he keeps buried. On the planet Omicron he is reunited with Leila Kolomi, a woman from his past who is very much in love with him. Spores released by plants on Omicron give humans a blissful high, and remove Spock's blocks on his emotions, allowing him to love Leila back. Nimoy plays Spock in a completely different way to normal, yet entirely recognisable as the same character. The final moments between Leila and Spock are tragic; Nimoy plays his recovered state with a deep, suppressed sadness that is hugely affecting to watch.


4) “The Galileo Seven” - Spock learns how to command


This episode is all about Spock. Told largely from his point of view, Spock is dropped into command when his shuttle is downed on an uncharted planetoid. With aggressive natives outside, a frightened and alienated team inside, and a rapidly closing window for rescue, Spock tries every logical course open until he finally acts in desperation. It's a great example of Nimoy's ability to make Spock both entirely alien yet wholly relatable.


3) “The Naked Time” - Spock struggles with his emotions


A very well-remembered episode, which sees the crew of the Enterprise driven into a state of hyper-emotional intoxication by a mysterious infectious agent. While the crew go to pieces around him, Spock struggles to maintain his own control. Nimoy puts in a wonderfully subtle performance, simultaneously portraying Spock's desperate attempt to hold himself together, and his previously unspoken desire to allow his emotions free reign like his crewmates.


Another episode all about Spock, in which we learn more about Vulcan life and culture than in any other story. His biology driving him to mate, Spock loses his self control, becoming violent and unpredictable. Some of Nimoy's best scenes involve Spock's struggle to maintain his rationality as his emotions threaten to erupt. This episode is the ultimate expression of that side of Spock's character, only this time it isn't his human half that threatens his composure – it's pure Vulcan drive. Nimoy goes through every powerful emotion in this episode: shame, lust, rage, grief and joy.


Arguably the best of the Star Trek films, The Wrath of Khan is very much Kirk's story. However, Kirk story is incomplete without Spock (one of the reasons why Star Trek Generations, the first of the films not to feature Spock, doesn't quite work). While Spock has some fine interplay with McCoy, and an interesting relationship with his Vulcan protege, Kirstie Alley's Saavik. It is, however, the scenes between Kirk and Spock where the film has its emotional heart, and no more so than in those final, heart-wrenching moments. Khan is dead, but he's taken the Enterprise with him. The engine core is about to blow, unless someone goes into the lethally irradiated chamber and shuts it down. The final devastating moments between Kirk and Spock, separated by a transparent panel, as Spock, blinded and dying, gives his final words to his friend. A justifiably beloved scene by Trekkies and cinema goers alike, it was, at one point, intended to be the final death of Spock, and while his popularity meant a return for the character was decided upon before the film was even completed, it would have stood as a perfect send-off for the character. Brave, emotional yet perfectly logical, Spock sacrifices himself for his crew, and his friends. It's going to be a very difficult scene to watch from now on. 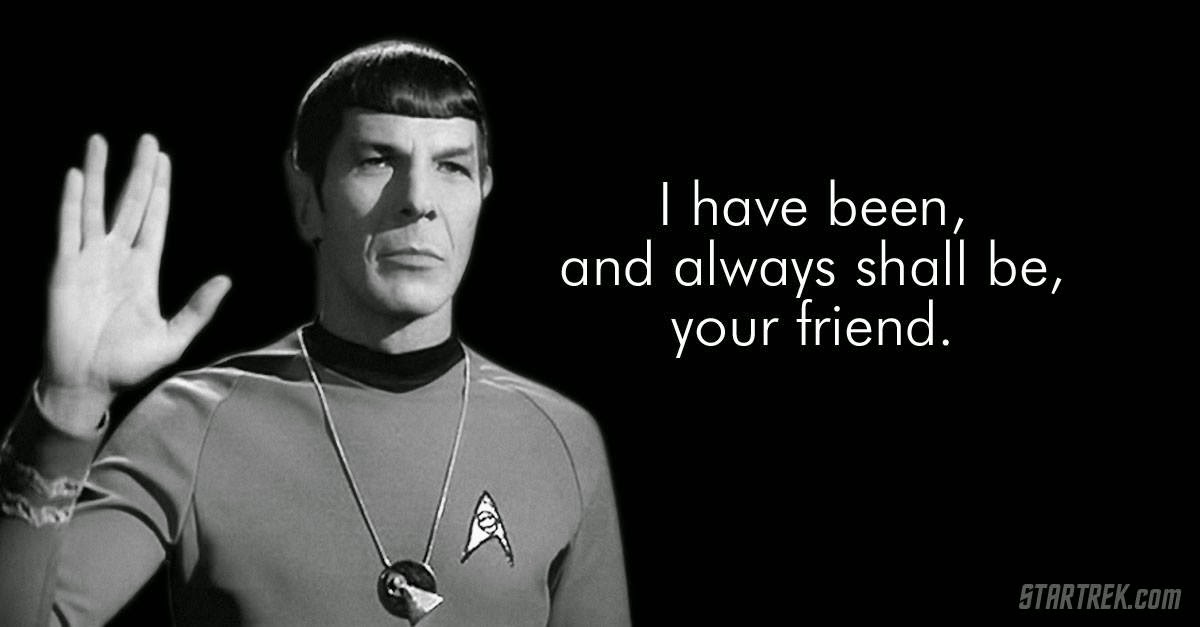