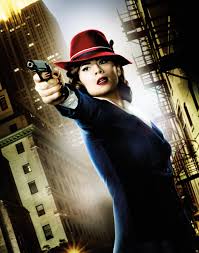 If any Marvel character has been screaming out to be used better in their screen appearances, it's Peggy Carter. Her appearance in Captain America: The First Avenger was a rare example of a genuinely strong female character; not just ass-kicking, or wise-cracking, or physically perfect, but a well-rounded and believable woman of remarkable talents. It seems particularly appropriate that I write this on International Women's Day. The running theme of Agent Carter, itself inspired by the same-titled DVD One-Shot mini-movie (now presumably rendered apocryphal), is that of Peggy proving her worth to the men who dominate her world. Gratifyingly though, this is never Peggy's aim. She doesn't set out to prove herself, she simply gets on with her job and does what she believes is right. As she herself says, she genuinely doesn't care about stuffed-shirts and old boys recognising her.


It's interesting that the series manages to pull this off so well, in spite of being so male-dominated in some areas. In part, this is necessary; Peggy lives in a world where men run the show, and women are thought of as ornamental or mildly useful. On the other hand, Peg's own story is inextricably tied to that of the men in her life. Most obviously, her story is entwined with that of Howard Stark, accused of selling his military secrets to the highest bidder and enlisting Peggy on a quest to prove his innocence. More significant, though, is Steve Rogers. The story of Captain America bookends the serial by dominating the first and last episodes, running through the story between by means of a MacGuffin vial of his unique blood. Plus, of course, there's the joyously period-styled Captain America radio series we hear broadcast and see being recorded, in which a thinly veiled Peggy named “Betty Carver” is nothing but a feeble damsel in distress. It's not far from how Peggy's colleagues view her; as having got her job on the strength of being Cap's bit of stuff, rather than her merits. It's these attitudes that continually undermine Peggy's character in the eyes of her superiors. None of them can conceive of a reason for her helping Stark other than that she must be sleeping with him, never once considering that maybe she's actually made the right choice. Indeed, while there appears to be genuine respect for Peggy on Howard's part, the series doesn't shy away from depicting what an unrepentant womaniser he is, and the damage that this can deal to his various partners. The relationship between Peggy and Howard appears considerably more strained by the end of the series, even if they have, superficially, formed a close friendship. Far stronger is the friendship between Peggy and Howard's butler, Edwin Jarvis, a relationship that is built on mutual respect for each other's abilities and unquestioning loyalty.

A TV series doesn't need to last for twenty-six episodes and have teams of writers, although apparently, a platoon of executive producers comes in handy. You can fit a lot of story into eight episodes, and there really is a lot to be said for the more concise approach. While Agent Carter has been designed to fit snugly in the gap between the two halves of Agents of SHIELD's second season, it's very clearly a better made production than its sister show. SHIELD took an age to get going, to firmly establish its characters and to develop a coherent storyline. Agent Carter had me hooked by the end of its first episode. By the end of its eighth, it was all over, and the only times it felt rushed were at points in that finale, where the pacing was a little lopsided. For the most part, this series worked beautifully, fitting the right amount of plot and characterisation into each episode, making each an enjoyable piece of televisual adventure while part of a greater story. Flashback scenes in the opening episodes of the new run of Agents of SHIELD helped tie the two series together, but Agent Carter felt far more a part of the MCU than SHIELD did. There were many references to the comics, but none of them felt forced or took anything away from the show if they were missed. Captain America is a character whose mythology I am less familiar with than some Marvel heroes, and so there were numerous nods that passed me by, but at no point did this dampen my enjoyment of the episodes. The only odd decision was the renaming of Fenhoff as Ivchenko – fans were already suspecting he was Doctor Faustus, so why adding yet another name on top was necessary I don't know.


One of the strengths of the story was the lack of a single major villain, instead presenting the heroes with more and more aspects of the USSR's Leviathan project. While it culminated in the involvement of Fenhoff and his muscle, Dottie – part of the Black Widow project, further tying the series to the wider Marvel universe – there was an ongoing atmosphere of a conspiracy being slowly unravelled. This Cold War paranoia is an element that can only be utilised further in further series. If a further series we get, but even if ABC's broadcasts aren't enough to secure a renewal on that station, surely Marvel could add a second season to their roster of Netflix series. There's still no word on when and how British viewers will get to watch the series, at least legitimately. There are, of course, ways and means, but dithering over the official routes only means more losses to piracy in the meantime. I don't want anything jeopardising the chances of a second series, especially as there are so many possibilities to explore. I would love to see more comic-booky elements be introduced into the set-up now that the world has been established. I don't know the status of Marvel's rights to the original Human Torch, but I would jump at the chance to see Jim Hammond, the inflammable android, introduced here.


At the end of the day, though, it's not just the writing and content of the scripts, but the cast that makes any such series a success or failure, and Agent Carter has it talent in spades. Of particular note is Dominic Cooper as Howard, who dominates any scene he's in with effortless charisma, but mention has to be made of Peggy's coworkers. Shea Wigham makes the SSR chief, Roger Dooley into a subtle and likeable character, in spite of his brusque and overtly masculine persona. Enver Gjokaj is especially likeable as Daniel Sousa, the one character who is in something of a similar position to Peggy, looked down upon as a lesser agent due to the disability he received in the war. Chad Murray's character, Jack Thomson, also has a great deal of potential, and the dynamics between the characters, supported by some excellent chemistry between the actors, could develop into something very interesting. Of all the second-level characters, it's probably Angie, the waitress and aspiring actress, who is the one I'm looking forward to seeing more of. As well as being the perfect match for Peggy as someone going through her own experiences in a male-dominated postwar world, Angie is rendered with such likeability by actress Lyndsy Fonseca, who makes her more than just a light-hearted sidekick. Also praiseworthy are Ralph Brown and Bridget Regan as the aforementioned villains Fenhoff and Dottie. 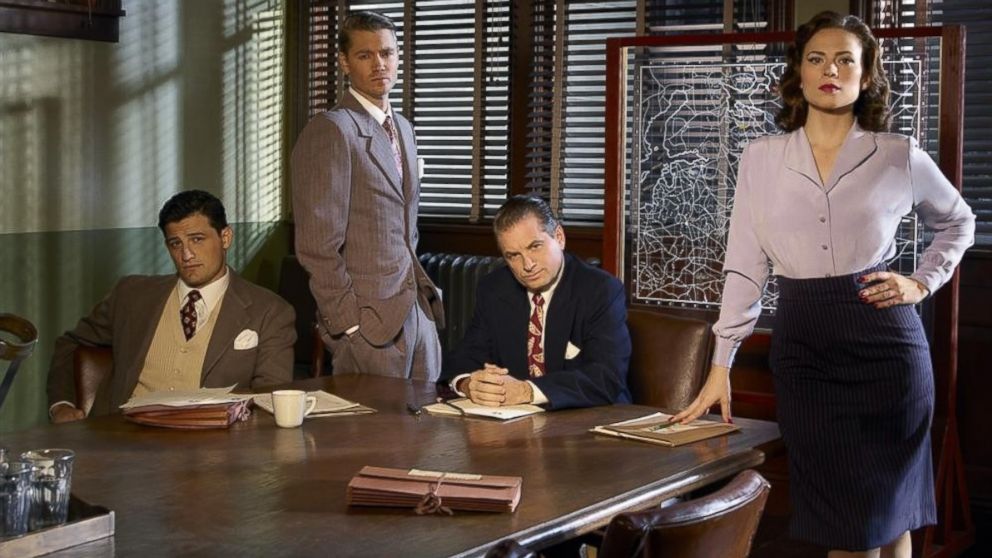 Fundamentally, though, this series belongs to Hayley Atwell, and to slightly lesser extent, her co-star James D'Arcy. Dealing with the latter first, D'Arcy actually had one of the hardest jobs of all. The original, comicbook version of Jarvis has been overshadowed in the MCU by his computerised equivalent, the AI JARVIS, voiced by Paul Bettany in the three Iron Man movies and both Avengers films. An ordinary human butler might seem like a step back, but skilful writing and an excellent turn by D'Arcy, quite unlike his more recognisable roles, make Jarvis a truly likeable character who undergoes genuinely interesting and believable character development. He makes for a perfect sidekick to Peggy, the one man who at no point looks down on her for her gender. It's Atwell's show though, and deservedly so. Her role as Peggy Carter in Captain America: The First Avenger made her many fans, and her own series is a just reward for her performance there. Given the limelight, she improves on an already fine performance. Peggy is an imperfect and therefore believable hero, relying on hard work and talent rather than superpowers, and what's more, doesn't need to parade around in a skintight outfit to do it. Not that there's anything wrong with beautiful actresses in tight costumes, but it's long been the case that barely concealed curves have been a prerequisite for the female comicbook hero. No, Atwell shows that beauty, brains and skill are not contradictory, and that sometimes, a damned fine hat is far more eye-catching than any amount of brushed leather. At the end of the day, Agent Carter is very much a spin-off of The First Avenger, but this is not to its detriment. For Steve Rogers is the one man, out of all the men who have impacted Peggy's life, that truly changed it. While his shadow may be cast over her story, Captain America is not the heart of it. It's Peggy's journey, and we need to see more of it.
Posted by Daniel Tessier at 14:04