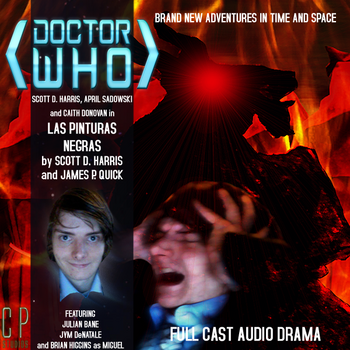 An occasional new feature: quick reviews of Doctor Who fan films and audios, both new productions and the old favourites. Las Pinturas Negras – the title referring to the horrifying “Black Paintings” of Francisco Goya – is the first in a short series of audio plays featuring Scott D. Harris as the Doctor. Produced by CP Studios, it is co-written and co-created by Harris and James P. Quick. It begins with a pretty effective regeneration sequence, in which the previous Doctor, played by Matthew Urch, meets his end at the hands of a Cyberman. Although it isn't as striking as it might be, since Harris and Urch haven't greatly different voices, the use of various little grabs from classic regeneration scenes works nicely. The Cyberman voice is also excellent; it's a shame it's only a brief apperance from the mechanical menace.


The new Doctor is young, full of energy, cocky and verbose, rolling his rrrrrr's like Sly McCoy reborn. He's a lot of fun to be around, certainly very Doctorish in his style. He's joined by companions Whitney and Zacharias, played by April Sadowski and Caith Donovan, who form a decent team. They're a little put out by the Doctor's regeneration, but the story doesn't dwell on this too long, getting into the adventure pretty quickly. Goya's bizarre paintings are a great starting point for a Doctor Who story; fourteen works the artist created during his misanthropic twilight years. It's a good hook, with the new Doctor facing demonic forces and a villainous cult. The setting, 19th century Madrid, is effective too; Spain isn't a common location for Doctor Who stories, and it makes Las Pinturas Negras a little different. There's some fine support from Jym deNatale as Solozano, Julian Bane as Mariano Goya, Francisco's grandson, and Brian Higgins as his ward Miguel. Actual Spaniards may well disagree, but they sounded enough like locals to work for me.

The music is sometimes questionable; it's not unusual for fan audios to take elements from the soundtrack of the actual series, but not all the choices work here. The classic Cyberman “Space Adventure” theme works well, but the extract from the TV Movie doesn't fit. Overall, though, this is nicely done; at three episodes, it has just enough time to craft a good adventure but doesn't outstay its welcome. Good fun.

Email ThisBlogThis!Share to TwitterShare to FacebookShare to Pinterest
Labels: audiobooks/audioplays, Doctor Who, fanfilms