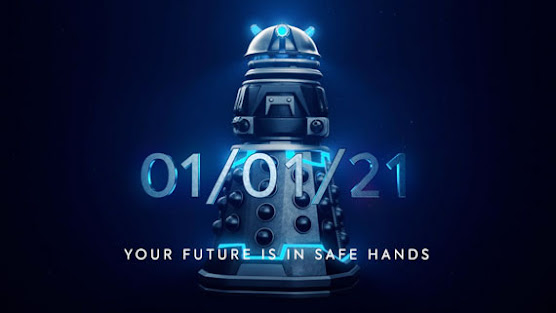 After a very peculiar year, Doctor Who gives us a special which perfectly fits the times. Which is pretty remarkable, since this was all recorded before lockdown was even on the horizon (aside from a couple of picked up scenes, according to reports, but I couldn't tell you which these were). Aside from the sheer amount of hugging going on – not allowed these days – there's a distinct lockdown feel to the entire story, beginning as it does with the Doctor suffering enforced isolation, and continuing with a reunion with friends she hasn't seen for months. It's serendipity, but it adds something to the episode.

It's an interesting but effective choice to make a special so directly linked to previous episodes. "The Timeless Children" was ten months ago (the same time the Doctor's companions have been waiting for her, which is a nice touch), but the more direct precursor is the last special, Resolution, which was exactly two years ago. Thankfully, the concepts being followed up on are pretty straightforward and easy to grasp if you have missed or forgotten about the earlier adventures. Even the Timeless Child revelations boil down to "the Doctor learned something about herself that she doesn't understand" and this is enough for the special. She's reeling, the details aren't important right now.

The Daleks are the big draw of the episode, of course, but there's plenty of time spent on the Doctor and her many companions. The prison scenes are fun – lovely cameos from some old monsters – but the toll it's taken on the Doctor is clear. She's essentially in solitary confinement for most of her time there, it appears, which we learn has been decades. It's not even clear that she's tried to escape. I mean, it's the Doctor, so you'd expect her to, but she's still dealing with the revelations about herself and it seems she's spent a lot of her confinement just stewing over that. The other big deal of the episode is Jack, making his first proper return to the series after his cameo in "Fugitive of the Judoon." John Barrowman steps back into his role like he's never been away, and he shares a great, easygoing chemistry with Whittaker. Having the immortal Jack wait a full nineteen years in prison so he can get close to the Doctor is wonderful, and shows that he's learnt some considerable patience during his centuries of life (he did spend two thousand years in a grave once after all). On the other hand, having Jack swagger in and rescue the Doctor does make her seem like a damsel in distress, which is not where the Doctor should be at all.

In fact, Jack takes on a lot of the Doctor's role as the fun adventurer for the episode, as the Doctor herself doesn't quite slide back into her usual happy-go-lucky mode, and quite right too. It's wise having both the companions and the Doctor feel each other's absence for some time, although I wonder if the Doctor will ever tell them just how long it was for her. We know the TARDIS has a tendency to take the Doctor to where she's needed rather than where she wants to go, so I feel that arriving ten months late was a deliberate move on the Ship's part. Time for the fam to grow as well. I love how Yaz, Ryan and Graham are still investigating, but aren't immediately up to spin-off series standard. They still need a little time traveller help. Jack has some great chemistry with the team, but particularly with Yaz, who's slotting into the trainee Doctor role that Rose, Clara and indeed Jack all had as their character arcs. As with them, Yaz is clearly in love with the Doctor, but cannily, Chibnall is keeping any feelings the Doctor has for her ambiguous. She's certainly very happy that Yaz isn't leaving...

It's Tosin Cole as Ryan who comes across strongest though, which I admit, was a bit of a surprise. As I said when reviewing Resolution, Cole is strongest with the real life emotional scenes rather than the sci-fi gubbins. It's quite right that it's Ryan who actually sits down with the Doctor and persuades her to talk, and that he's the one who makes the decision to stay on Earth. He's developed just as much as Yaz, but in a different direction, and being the more down-to-earth of the two her naturally elects to stay on solid ground. Cole's magnetic in these quiet, dialogue-based scenes. The only companion who gets short shrift is Graham, a shame considering he's also leaving. Still, his final moments on the TARDIS are lovely. He clearly wants to continue travelling with the Doctor, but stays behind out of loyalty to Grace and Ryan. It's a quiet but powerfully effective moment from Bradley Walsh.

Following up on the Dalek scout from Resolution is a good decision. Everything in the episode is a consequence of previous events, rather than yet another unlikely situation coming out of the blue. The scout design was controversial (because no one's ever happy) but I liked it, but given that it was designed as a kitbash Dalek built on the run it didn't seem like it could be followed up. Having a bunch of humans acquire the remains and use it as the basis of their own Daleks is a clever way of reusing and reviving this new design. The new Earth Daleks work brilliantly, with the scout design built upon to become something sinister and imposing. Sadly, they're rather wasted. We know from the beginning that somehow an actual Dalek will find its way into the drones, but there's virtually no time to see the drones in action before this, or the effect this has on the British populace. Equally, once the drones have been co-opted by the Daleks, we have scarcely any time with them before the bronze Daleks wipe them out.

Still, there's some excellent Dalek action on display. I enjoy how in both episodes there's a focus on how the Dalek is a life form, not just a war machine (even if the Doctor refers to the mutant as "the creature that lives inside a Dalek," but I guess that's just simplification for Robertson). The Daleks are almost as dangerous outside their casings as they are inside, and honestly more frightening. The episode does rerun the previous special a bit, with the Dalek possessing Leo, but this doesn't last long and is more of a way to get from one part of the story to another. Having Leo clone the previous story's Dalek (cannily revealed to have a genetic memory as well, so it can pick up where it left off) is a great way of kicking off the plot, but I feel they missed a trick. Nathan Stewart-Jarrett is excellent as the young scientist, but having him as just a patsy and then killed off wastes him. He could have been a Davros figure, working with the Dalek.

Instead we get Chris Noth back as Jack Robertson from "Arachnids in the UK" nearly three years ago. I doubt anyone was desperate to see him again, but to be fair, he's much more entertaining this time round. Noth hams it up marvellously, and he's written as more deliberately villainous, so he's far more effective as a baddie. However, it's infuriating that once again, he gets off scot free. Surely they're building up a third appearance where he finally gets his comeuppance? Dame Harriet Walter, playing the power hungry politician Jo Patterson, is completely wasted. She's a great actor and makes for a great villain while she has time, but is also killed off far too quickly. I think it's inarguable that there are pacing issues in the episode, with some parts run virtually on fast forward. It brings to mind the seventh series during Matt Smith's tenure, when episodes were run at an absolutely breathless pace. It's certainly a fun, exciting episode, but the plot needs room to breathe as well as the characters' relationships. Still, for sheer spectacle, this is great stuff.

The Doctor's been through a rough time, of course, but she's particularly ruthless here, which, personally, I love. None of that nonsense about claiming to be pacifist or complaining that the other Doctor picked up a gun. The Doctor here tricks one lot of Daleks into coming to Earth to wipe out another lot, in the full knowledge that she'll have to destroy them too. It's a pretty mental plan, but it works, and the ruse of trapping the entire Dalek force in a collapsing TARDIS is brilliant. Again, incredibly ruthless though; that TARDIS is a living being as well. Can't imagine the Doctor's TARDIS was pleased about that.

Finally, we look to the future. We can look forward to an eight episode season this year, a sensible compromise in the face of COVID-19 restrictions. I'm glad we don't have another year without a series, and I'd much rather a shorter one than none at all. I would be very surprised if we don't see Graham and Ryan again, or Jack, and the dialogue around the latter checking in on Gwen certainly sounds like a hint we might see a Torchwood revival of some kind. (Chibnall, of course, was showrunner on the first two seasons of that.)

The sudden reveal post-credits that John Bishop is to join the cast was a surprise, but a welcome one. I enjoy his stand-up, and we've had enough comedians cast in the past that turned out well for the series (going right back to Pertwee, really). We'll see what he's like, but I'm optimistic. Interesting that we're getting another older man in the TARDIS as well. It's been confirmed that he's a new companion, however the BBC made such a big deal before about there being an entirely female TARDIS team for the first time that surely we'll get an episode or two with just the Doctor and Yaz? In any case, Bishop's character is called Dan, which is good news. About time we had a Dan in the TARDIS.

The prison asteroid (a whopping 79 billion light years from Earth, which is absurd) has amongst its inmates a Sycorax, a Weeping Angel, a Pting, a member of the Silence, an Ood, and hiding i the shadows, a Thijarian and a Skithra.

Ryan and Graham are keeping tabs on international paranormal events. They're off to look for trolls in Finland – that has to be the Sontarans we've seen filming, right? - and gravel creatures in Korea.

The Doctor starts a (mercifully short) Dalek civil war here. This is at least the third time she's done that.