WHO REVIEW: All Flesh is Grass (Time Lord Victorious) 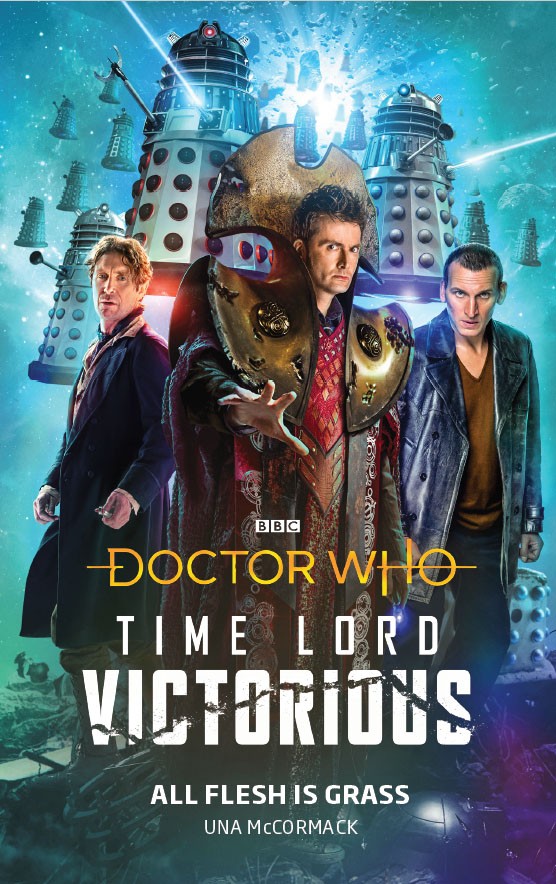 Well, this is the big one. It's the epicentre of the Time Lord Victorious storyline, the return to full length prose by the Eighth Doctor, the unprecedented team-up of the Eighth, Ninth and Tenth Doctors and a right royal monster mash to boot.

In the the cliffhanging final scene of The Knight, the Fool and the Dead, the Tenth Doctor, beginning his crusade against the Kotturuh and death itself, is confronted by the Eighth Doctor on a Dalek warship, and the Ninth Doctor on a vampire coffin-ship. This ties in with the DWM comic strip and with the Big Finish audios, the latter of which I haven't got round to yet, but it's all easily pieced together with the brief exposition from the Eighth Doctor and Brian the Ood. You could enjoy this plenty as a prose-only event, but grabbing the other formats builds a bigger picture. I'm less clear from the story here how the Tenth Doctor comics and the Dalek cartoon fit in, but I think they're knock-on effects of the Tenth Doctor's disastrous alteration of history here, which has brought his earlier selves back to fight him.

Una McCormack is one of the most prolific modern Who writers. With this novel, she's written for eight incarnations of the Doctor, I think (plus a ton of Star Trek novels and some Blake's 7 material). She gets the Doctor down to a tee, notably the differences and similarities between his incarnations. It's fun having Eight, Nine and Ten together since, while being successive (well, almost) they have wildly different ways of approaching things. The Eighth Doctor here is still fundamentally optimistic but sarcastic as hell, the Ninth Doctor is tending his war wounds and the Tenth is so fundamentally full of himself he knows he's his own worst enemy. I mean, he's literally his own worst enemy in this one, but you know what I'm saying. Yet they also work so brilliantly together. It isn't long before Ten stands down and the three Doctors try to work out a way to get out of this mess without making things worse (and just possibly making things better), and they work tremendously well as a team.

There's a lot of colour in this novel. The Ninth Doctor gets a short-term companion in the form of Ikalla, a vampiress who develops considerably throughout the novel (or perhaps the Doctor just learns to see her differently). Eight doesn't have a companion really, but is accompanied for a good portion by Brian, and also Hector, a spider plant (so that's where he came from! Monstrus Beauty now makes perfect sense). He has some great interplay with the Daleks, particularly the Prime Strategist who's become such a persistent character in Time Lord Victorious. Ten saddles himself with some galactic mercenaries but can't help feeling sorry for them and overpaying. It's like he's trying to prove he's the big bad God of Time but can't help feeling a bit bad about it all the time.

It's a rattling good read, anyway. I mean, it's got a vampire Dalek in it. How can you not love that?

For the Eighth Doctor, uncertain. It's straight after the BF Time Lord Victorious audios, but while they and this show him in his Time War costume, he reads as much younger and more positive here. He's perturbed by the idea of a universe without Gallifrey, but not distraught, so this is surely before the first destruction of Gallifrey in The Ancestor Cell (most new series books would ignore this but given the cross-pollination of ranges going on here I can't believe McCormack didn't at least consider this). I could happily see this placed during the earlier EDAs, especially as he mentions Romana and K9, tying back to the Shada webcast, which is very early on.

For the Ninth Doctor, in between the penultimate and closing scenes of the DWM comic strip Monstrous Beauty, while Rose is recovering. Some time between "The Long Game" and "The Empty Child," most likely (could be either side of "Father's Day").