WHO REVIEW: The Knight, the Fool and the Dead (Time Lord Victorious)

This novel is part of the already quite sprawling Time Lord Victorious event, and while some of these different elements seem quite tenuously related the main strand, this is right in the very centre of it all. Picking up pretty much straight after the Doctor goes all power mad at the end of The Waters of Mars, it sees him travel back to the Dark Times at the very dawn of the universe simply because there's no one around to stop him.

It's a bit of a retcon, the whole concept of this crossover, since on screen the Doctor appeared to get the stuffing knocked out of him by Adelaide Brook's death and renounced his Time Lord Victorious ways... but then he did shoot off for a victory lap around the cosmos rather than go face his fate when the Ood showed up. So while it doesn't quite fit to the letter of what we saw, it does fit the ethos, with perhaps the most arrogant of Doctors (yes, even more than Six or Three) throwing his weight around. 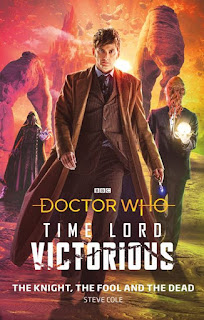 The BBC could have got someone a bit more... daring, I guess, to write this essential novel, but then, I suppose you want a safe pair of hands for something like this, and Steve Cole is a good choice in that regard. His prose is solid and easy to read, he has a good grasp of the Doctor's character(s), and he has a lot of experience. He was the range editor for the BBC Eighth Doctor Adventures and Past Doctor Adventures novels for a good while, wrote a bunch of them (often under pseudonyms Michael Collier and Tara Samms), came back for the New Series Adventures, did a whack of Big Finish audios, some Iris Wildthyme short stories, about a hundred comic strips for Battles in Time back in the early days of the new series. Basically, he's got form, and while some of his work is pretty forgettable, he's also responsible for some of my very favourite Who stories.

The Dark Times turn out to be a lot brighter and more lively than we might have expected from previous glimpses (something even the Doctor notices). This is an era before the invention of death, when everyone is immortal, barring accidents. It's a fascinating concept, and I wish there'd been scope for more exploration of how societies would evolve in such a fundamentally different universe. After throwing around Dark Times concepts in the other stories and showing us glimpses of the Kotturuh, this book brings them front and centre. They're truly nightmarish, Lovecraftian creations, and for reasons of their own, have given themselves the mission to assign limited lifespans to all of the universe.

It interesting seeing the Doctor confronted with what something that's part of his established ancient history, only to be reviled at the visceral personal cost of it. It's a great inversion of the situation in The Fires of Pompeii, and it's good to see the Doctor on the wrong side of destiny. Of course, this is the Doctor, who can overthrow empires when he's in a good mood. In a bad mood, he starts his own crusade against the Kotturuh and vows to rewrite the entire history of the universe. In spite of Cole's background on the BBC EDAs, this novel reads a lot like the New Adventures, with a frighteningly powerful Doctor facing threats from the dawn of time and meeting aliens with bizarre names, complete with interludes showing the First Doctor (and the Eighth and the Ninth, for that matter).

The Doctor finds himself working with Brian the Ood, an absolutely lovely creation; an Ood assassin with a split personality who places all his worst impulses in "Mr. Ball." I can see why Brian's been picked as a recurring character in TLV. The incidental characters are pretty solid, but none of them really stand out in the same way as Brian.

The book ends on one hell of a cliffhanger, with the Doctor taking on the mantle of the Time Lord Victorious once again and sets out to remake the universe to his own design... before two familiar faces turn up. While it's not the standout work of Doctor Who some of the hype built the TLV novels up to be, this is a solid novel with some powerful moments that sets up even more exciting things to come.