Look, I'm not averse to a spoilery review, but if you haven't seen this episode yet, you really need to go an watch it now. Then you're allowed to carry on reading. 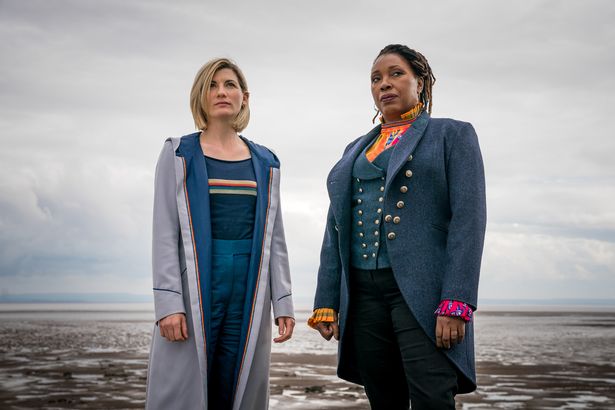 "Introducing Jo Martin as the Doctor."

I can't remember the last time Doctor Who surprised me like that. I realise that's what I was saying about Spyfall, but then they go and pull the rug out from under us again. "Orphan 55" aside, this series has stepped it up a notch. A cynical perspective might suggest that Chibnall and his team are replacing solid writing with shock twists, but damn it, it works, and it never did Davies or Moffat any harm. Only somehow, Chibnall is pulling it off. That's two episodes this year that have managed a shocking reveal that I had no idea was coming. The closest the series came before was the the John Hurt reveal, and even that had sparked rumours before it was aired.

Patel's script (although I assume the outline was written by Chibnall, given the series-shaking events) is silly fun to begin with, and the surprises were handled so well by the production team and the BBC. First, fans of the Tennant years are tempted back by a memorable monster. The Judoon are a bit crap, really, a bunch of ludicrous thugs whose language and laws make no sense whatsoever, and exist basically to stomp around. But they look arresting (sorry), are easy for kids to imitate and make an impression. Plus, the animatronics looked excellent in this episode. So that's the hook, with the publicity machine promising a big surprise.

Then John Barrowman drops in. First it's just his voice, leading to an "oh my god, is that Captain Jack?" Then the man himself appears, in all his unsubtle glory. Although Chibnall wrote for Jack during his brooding phase heading Torchwood, this is full on, flirtatious, series one Jack, cheesy as hell. I love the running joke of characters assuming Graham is the Doctor, I love Jack's smacker on his face, and Barrowman is clearly loving all of it. Captain Jack is essentially pointless here; he's there to drop some teasers about the Cybermen later this series, and keep the companions out of the way once they outlive their usefulness to the plot. There's nothing wrong with a fan-pleasing cameo, though.

So that's it, that's the surprise... and then the fugitive is revealed. Not all at once, but a bit at a time. At first it's heavily suggested that Lee (a nice performance from Neil Stuke, an underrated actor in my opinion) is the fugitive, and he clearly has something to hide. But he's protecting Ruth, and once he faces Gat (Rita Arya, not seen her before but dying to see her again) the mask is off. The faithful companion - the clue was right there! By the time Ruth and the Doctor are at the lighthouse, after all the talk of a cloaking device that sounds an awful lot like a perception filter, we're just waiting for the reveal. We know it's a chameleon arch, but which Time Lord is it going to be?

And then the TARDIS is revealed, buried under the ground. Slightly disappointed the lighthouse didn't turn out to be a TARDIS, but was an image. Jo Martin stands there, and before she says anything, you know who she is.

As fun as all the runaround before is, it's this reveal, the twist hidden behind another surprise, that is all anyone is going to talk about. Martin herself is great as the Doctor - a bolder, more authoritative version than Whittaker's. I might almost say I prefer her, but Whittaker has some of her best moments in this episode, particularly the quieter ones where she is manipulating Ruth into saying more about herself. Once the Doctor - sorry, I'm going to have to call her Dr. Ruth from now on - is her true self, both actresses step up their game. Ruth's human persona is clever too; to begin with, she's unrealistically chirpy, before this facade slips and she shows real fear and not a little steel. Masks behind masks. Although, when the Master went into hiding, he became a mad professor at the end of time. That's a bit better than a crap tourguide in Gloucester. Nonetheless, there's a sense that Ruth had a real life and real happiness with Lee, which adds a sense of tragedy to the reversion to their Time Lord selves. (I'm glad Alan at the coffee shop got vapourised though. Creepy bastard.)

Multi-Doctor stories are always a treat, and the interplay between the two incarnations is some of the best we've seen, brief as it is. The Doctor rigging an enemy's weapon to backfire and kill them is exactly in character for her, just as it's perfectly in character for the Doctor to hypocritically try to take the high ground over it. One thing the Doctor hates is to be confronted by her own shortcomings.

So what are the options? The suggestion is that Dr. Ruth is a forgotten incarnation, somewhere in the Thirteenth Doctor's past. The only likely place to fit yet another incarnation would be pre-Hartnell,, although it's just possible she's between Troughton and Pertwee (we never actually saw the regeneration). The Thirteenth Doctor seems convinced Dr. Ruth is in her past, because she and Gat are contemporary with Gallifrey, but in the same breath, she notes how the planet has been destroyed twice. So, why is it so hard to assume that Gallifrey is restored again in her future?

I'd prefer that Dr. Ruth wasn't pre-Hartnell. Not because I'm beholden to canon or that I won't accept that there can't be lost incarnations before him; I'm totally onboard with the faces in The Brain of Morbius being the Doctor's earlier selves, which they were clearly intended to be. But having the Doctor running around, having adventures, calling themself the Doctor before the "First" Doctor damages his storyline. Hartnell's arc was his incarnation learning to become the Doctor, which is why "season zero" adventures rarely work.

It seems far more likely that Dr. Ruth is a parallel version of the Doctor. Spyfall hinted at the involvement of parallel Earths, then quashed the idea, but maybe there's more to it? The Dhawan Master could potentially be a parallel version too, which would avoid the  need to negate Missy's arc. (Then again, I'm wondering if Lee might be a version of the Master. Or would "Master Lee" be too much of a pun?) Whatever the case, I'm dying to find out. Piled on top of that we have the mystery of the lone Cyberman, and the Timeless Child... it's all very intriguing.

I just hope this isn't all a massive fakeout. Not only does Martin make a very promising Doctor, but having a black woman play the Doctor must piss off so many stuck-in-the-mud fans it's worth breaking canon for.

Maketh the woman: I love Dr. Ruth's outfit - snappy frock coat and waistcoat over a seriously loud shirt. The hexagonal glasses are snazzy too.

Time and Relative: I like Dr. Ruth's TARDIS interior much more than Thirteen's.

Gallifrey Falls: Actually love, you've seen Gallifrey destroyed three times, and two of them were your fault, so lay off the Master. (Assuming the EDAs count, and I say they do.)

Email ThisBlogThis!Share to TwitterShare to FacebookShare to Pinterest
Labels: Doctor Who, Doctor Who New Series, Doctor Who Series 12, Other Doctors, reviews, Thirteenth Doctor