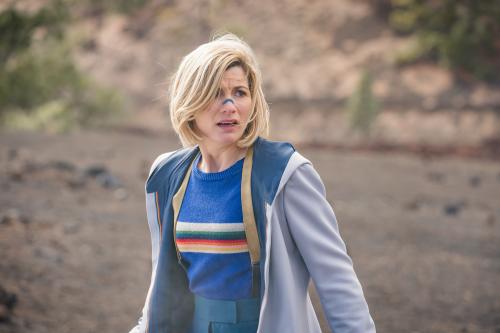 Damn, that was disappointing. After such a great start, series twelve drops the ball completely with a real hash of an episode. Though not without its entertaining moments, "Orphan 55" is nonsensical stream of events that fail to cohere into anything worthwhile.

Which is a shame, because Ed Hime is trying to say something important with this script. Speaking out about global warming is important, even though it's probably screaming into the void at this point. "You're arguing over the washing-up while the house is burning down," is a genuinely excellent line. It's just a shame that there aren't really any others in the script, and that it comes in the midst of a tediously long monologue from the Doctor. A decent script would have made the importance of changing our environmental impact part of the story, not tacked it on the end. And frankly, a message about changing our behaviour to tackle global warming is hard to swallow from a programme with such a gigantic carbon footprint. A series that films in Tenerife, South Africa and Australia lecturing about the environment feels like one of the big blockbusters that seeks to teach us that money isn't everything.

It's a very derivative story as well, but then again, some of the most enjoyable episodes of Doctor Who have been derivative as hell. But to make a derivative episode work, you have to do it somehow differently to what's come before, or at the very least make it entertaining. Hime's previous episode, "It Takes You Away," was an oddity that didn't quite work, but at least it was different. This episode was merely a series of set pieces that were done better on previous episodes. So Orphan 55 is Earth in the future? So was Ravolox, and when The Trial of a Time Lord is the better handling of a concept, it doesn't look good. The bus ride through the deadly environment was done far better by "Midnight," the holiday camp built on the home of deadly creatures was done better in The Macra Terror.

The reveal that the holiday spa is a faked environment is nicely handled (like the "fakation" neologism) but the hostile environment doesn't convince. It's hard to persuade an audience that the outside is inimical to all life when there are visible trees. Then again, Hime seems to think that trees "breathe" carbon dioxide and uses this to explain the Dregs, apparently not realising that plants respire oxygen as well. Still, having the Dregs turn out to be mutated humans is a fairly nice twist, even if it's one that's completely obvious the moment it turns out Orphan 55 is Earth, and let's be honest, that was hardly the biggest shock ever. (I honestly expected them to use that twist for Desolation on "The Ghost Monument" last series.) The "dregs of humanity" angle could work well - the idea being that the rich and elite abandoned the Earth, leaving the little people behind - but it's thrown in and passed over too quickly. Nothing has time to stick in this episode. In some ways, this seems like one of the more frenetic comic strip stories - everything is there because it'll briefly look good.

And for the most part, it does. The Dregs are a very ordinary monster design, but are nicely realised all the same. Then again, you've got Hyph3n, the furry. At least, I assume that what she's meant to be - if she's actually meant to be an alien, then god only knows what the costume designers were thinking. Again, it's a script just going, here's an idea. Oh, didn't work, try the next one. Characters aren't developed beyond simple character traits, and most of them get no closure beyond a sudden burning need for self-sacrifice - three times in one episode, in fact.

Laura Fraser is completely wasted on this episode. They have James Buckley and give him no funny material. Gia Re does at least share some chemistry with Ryan, but her character is so nuts it's hard to take her seriously as soon as her motivation is revealed. By far the worst element of the episode is Vilma, played by Julia Foster, who hams her way through the episode, spending half of it screeching "Benny!" at the top of her lungs. That's BEnni, who for a moment becomes a spooky voice from the deadly outer wastes, before calmly asking to be murdered. Because he's apparently being tortured by monsters. But can still have a conversation. 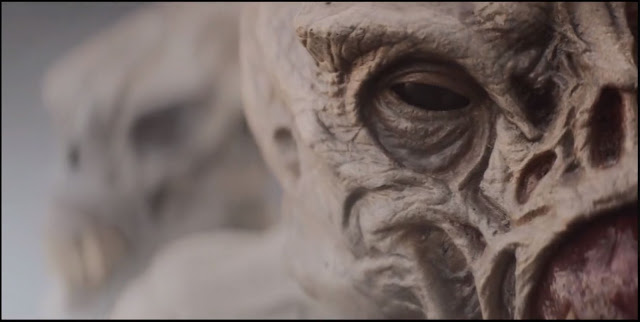 I can't say I'd like another episode of this, but it might have had a chance to work if it had been a two-parter. The concepts might have had time to be explored, the characters could have been developed. Instead, everything steamrollers ahead with no regard for logic or characterisation, until everyone except the regulars is apparently dead. Still, it's hard to care too much. Before we've had a moment to think about them, we're onto the lecture anyway. Although the moral seems to be less "global warming will render the Earth uninhabitable" and more "if you don't change your ways you'll turn into monsters." Actually, it's not a comic strip - it's like a story from a World Distributors Doctor Who annual.

Graham gets some funny moments at least, and Jodie Whittaker really tries to sell her lines. At the end of the day, though, there's too little that works in amongst the nonsense. I preferred this warning when The Curse of Fenric gave it.

Maketh the Woman: I do like the Doctor's knitted version of her signature top.

Future History: The revelation that all futures we see in the series are merely potential futures that can still be changed is really the only way that Doctor Who history can make any sense. As much as I like AHistory and the mad attempt to tie all of the events of the series into a single chronology, the futures shown in the series across its 55-year run contradict each other so much they really can't fit together. Plus, this way all future stories can happily ignore the Earth's fate as Orphan 55 and the events of this episode.