I adore A Christmas Carol. I read it pretty much every year. And so I was thrilled to have the opportunity to see the latest stage version at the The Old Vic in London, scripted by Jack Thorne and starring Rhys Ifans as Ebenezer Scrooge. It was, in a word, wonderful.

The stage in central to the theatre, constructed from cash boxes beneath Victorian street lanterns. The stage is simplistic but ingeniously operated, the world of the play made up from doorframes, sound effects and faux snow. The frontmost rows of the audience are practically on the stage, and by the boisterous, glorious finale, Scrooge is running amongst the aisles, the entire theatre brought into the production.

The best adaptations of classical material are frequently those that take the greatest liberties with the source text, and this newest version of A Christmas Carol is a good example. While it is true to the spirit of the novel (pardon the pun), it has been heavily rewritten, with only the best remembered and most essential lines retained. The events that are visited through Scrooge's past, present and future vary significantly from what we see in the novel, although there are also elements retained that are usually forgotten. The strength of the production lies not only in the new script, but in how vividly and powerfully it is brought to life. 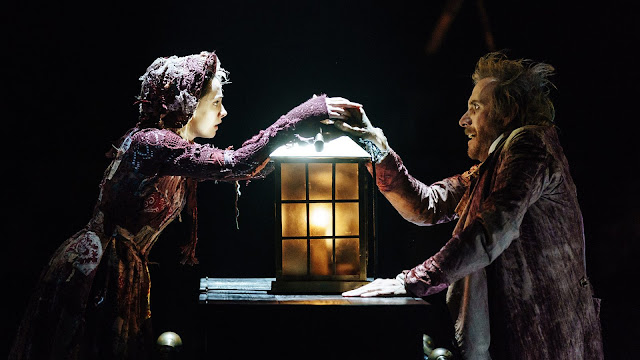 Ifans is astonishingly good as Scrooge, taking his place as one of the very best. His Scrooge is hairy, unkempt, clad in threadbare robes and physically aged, but full of life. It is a very bitter sort of life, though, making him the loudest, coursest, most intimidating version of Scrooge I've seen, shouting, bullying and spitting his way through the performance. (Really, I felt for those people in the front row.) As he is taken back through time, we see him as a young boy (played well by Jamie Cameron), but soon Ifans steps into the role, straightening up and taking on a youthful vigour as Scrooge relives the essential moments of his life.

Most adaptations give greater significance to Belle than the novel does, making her a major factor in his callous outlook, rather than merely a victim of it, and this version in particular follows her further in her life than is usual. In this version, Belle is the daughter of Fezziwig, streamlining the backstory somewhat, and is charmingly played by Erin Doherty. A major change from the usual storyline is the attention given to Scrooge's home life as a boy and young man, giving him a hypocritical hatred of his penny-pinching father (Alex Gaumond, who also portrays a desolate and distraught Marley). These scenes also give a lot of time to Scrooge's sister, Little Fan, later mother of his nephew Fred, who is portrayed with great spirit and sympathy by Melissa Allan.

Almost every member of the cast takes at least two roles, most of them taking on duties as group narrators, and several of them taking on two major roles in the story. Particularly good are John Dagliesh as a likeable, open-faced Bob Cratchit, Alastair Parker as an especially ebullient Fezziwig, and Golda Rosheuvel as Mrs. Fezziwig and the Ghost of Christmas Present.

It's always fascinating to see how the three Ghosts of Christmas will be portrayed, especially on stage when special effects and visual trickery are limited. Here, unusually, we have an all-female role call of festive phantoms (Marley notwithstanding), who appear as part of the same class of spirit, rather than the strange assembly we have described in the novel. Initially, the Ghost of Christmas Future is visualised by the entire extended cast, veiled in black, swarming Scrooge, before a single character from his past is brought back to stand for the ghost in one of the most effective changes to the story.

Tiny Tim is played by four different children, each one taking turns of different performances. When I saw it, Grace Fincham played the youngest Cratchit. She gave an absolutely beautiful performance that put me to tears. Even as Tim's fate - far more immediately portrayed here than usual - affects Scrooge terribly, he remains defiant in the face of the ghosts for a long time. Perhaps the most effective change is to Scrooge's funeral, where, instead of being empty, sees people from his life attend to read eulogies and declare that they do indeed hold love for him, in spite of his attempts to push them away. I'm tempted to say it improves upon the original in this regard, making a powerful and positive effect on Scrooge's attitude rather than frightening him with something negative. When it comes to the climactic finale, Scrooge really is a changed man, Ifans taking the aggressive energy from before and channelling it into a joyful, exuberent, Doctorish performance. The entire audience is invited to his "invasion" of the Cratchits' home, before everything quietens down for the final, beautiful moments.
Posted by Daniel Tessier at 22:00