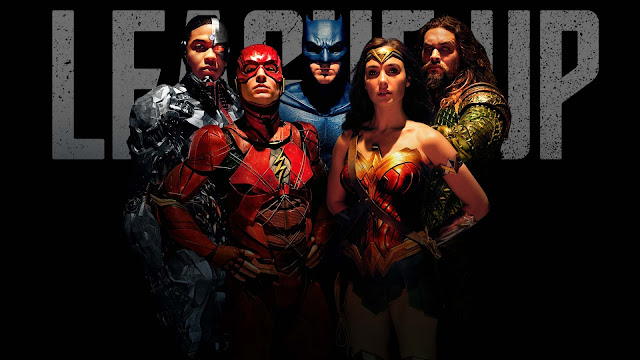 Well, I actually thought that was pretty good. It's no secret that Justice League's had a troubled development, and the internet at large has been seriously down on it, but really, that was an enjoyable way to spend two hours. The obvious comparisons are its predecessor Batman vs. Superman and the two Avengers films (plus Captain America: Civil War for the team-up elements). I'm a bit of a B.vs.S apologist – it's not nearly as bad as people say – but it's certainly a long way from being a good film. Justice League is a major improvement on it, in terms of pacing, characterisation and dialogue, and it thankfully doesn't drag on for three hours.

Zack Snyder left after a large portion of the film was in the can, due to a family tragedy, and Joss Whedon was brought in to complete it. Warner Bros. appears to have taken this opportunity to lighten up the DCEU, and it's no bad thing. League has a good deal more humour and heart than either of Snyder's previous DC movies, and it really, really helps. There's a lot more to love than in B.vs.S. or Man of Steel, and while some areas do have a little bit of clash, for the most part, it feels to me that those moments where the humour undercuts the action are deliberate.

The most obvious join is the mysterious case of Henry Cavill's moustache. The actor had grown a tache for Mission Impossible 6, and when he got called back for reshoots on League, Paramount steadfastly refused to let him shave off the facial fuzz. Warner Bros. Even offered to pay for Paramount to add the tache back on (it's not as if it had to be digital, false moustaches are not an uncommon thing in acting). In the end, they had to remove the tache digitally. It looks terrible. Digital reworking of actors' faces has come a very long way in recent years, but it's still not quite there, and mouths are the hardest part to make believable. It's a disconcerting trip to the uncanny valley for a movie that really needs to get audiences back on side with the character.

DC/WB made a very strange decision in its attempt to ape Marvel's lead, jumping straight to the team-up movies and foregoing much of the introduction for the characters. That said, the fast-tracked intros for Aquaman, Cyborg and the Flash work pretty well here, although it seems clear that there was a lot of material cut from these sequences. Cyborg and the Flash are pretty easy sells; their backstories are straightforward science-gone-wrong/chip-on-the-shoulder deals and it's not hard to get an audience up-to-speed on them. Anyone who reads my stuff knows I'm a big fan of the Flash, and I really like Ezra Miller as Barry Allen. He's a tremendously likeable character in a film that is full of not-particularly-likeable superpeople, and it's easy to see why Whedon upped his share of the dialogue. The Flash posed an interesting visual challenge as well, given that there's now been four years of the character on TV, plus two versions of Quicksilver in Marvel-based films. The X-Men version of Quicksilver had him sauntering through a slo-mo world, while the TV Flash is visually running at incredible speed. League has gone for a more visually elaborate approach, with lots of speed lightning and the Flash visible moving through a slightly different dimension. It works well, and stands out against the other screen speedsters.

Ray Fisher is excellent as Victor Sloane the Cyborg, not so immediately likeable but sympathetic, tragic and heroic, and I'm looking forward to his stand-alone film, should it happen. Aquaman, on the other hand, is a ridiculous character. He's an underwater superman who wears gold and talks to fish. There were two ways the film makers could have dealt with this, one of which was to send up the character like in The Brave and the Bold. They took the other route, casting Jason Momoa to swagger and smoulder his way through the film as the sexiest Aquaman ever. It works, although they do let Bruce Wayne poke fun at him occasionally.

I'm still a big fan of Batfleck; I hope that, if they do eventually make The Batman, they keep him on. He's got just the right level of square-jawed scowliness. Henry Cavill and Amy Adams are largely wasted, but they still have good chemistry when they do finally share some screentime. Gal Gadot is still the best thing in the DCEU and they're lucky to have her. She's heart and soul of this film, although the script doesn't have an issue with pointing out her flaws, like the fact that she spent the better part of a century hiding out and sulking. (And when Batman tells you off for sulking, you really know you're sulking.) The opening sequences where Wonder Woman takes care of some Anglo-terrorists was apparently added on late in the day, but when you've got someone like Gadot, you make the most of her. Although her arse should probably get its own credit, given how much time the camera spends on it.

The storyline is a bit messy, but the core of it works well. The Mother Box (or as we started calling it, the Martha Box) is the superpowered MacGuffin, being the objective for the villain of the piece, the origin of Cyborg, and the key to resurrecting Superman. It's a strong hook to hang the plot on, even if much of the rest of it is unfocussed. The villain himself is less successful. Steppenwolf is a pretty obscure monster, and could have been made into whatever the script needed, but he's a very generic power-mad conqueror here and looks like he just stepped out of a videogame. Ciaran Hinds does some nice voice work, though, and Steppenwolf serves his purpose as a force for the heroes to rally against. His insectoid minions look pretty good too, even if there's no consistency to how widespread or powerful they are. (Seriously, Steppenwolf can open wormholes and the parademons can tear down concrete walls, but they can't get into a wooden house with windows?)

The broader cast are generally impressive too. Jeremy Irons is pretty great as a world-weary Alfred, and J.K. Simmons as Commissioner Gordon is a stroke of minor genius. Joe Morton is great as Silas Stone, father and creator of Cyborg, and is wisely kept as part of the storyline for as long as feasible. There's the definite sense that a lot of material for these actors was lost as part of the reshoots and trims, but it's left us with a slicker, more enjoyable movie, so it's probably worth it. Perhaps we'll get a director's cut someday.

The film's score has also been the victim of creative changes behind the scene, with Hans Zimmer initially signed up before retiring, and Junkie XL taking over before being kicked off the project in favour of Danny Elfman. The result is surprisingly decent, with some lovely asides to previous DC works. Elfman evokes his own Batman theme for Bruce's scenes, the John Williams score for Superman for Clark's, and even the theme for the CW series of The Flash, and, of course, Wonder Woman's theme from B.vs.S. It could have been a mess, but it works well.


Justice League is a lot of fun, and while DC/WB have been chopping and changing their plans based on audience response to previous films, I hold hope that they stick to their guns and follow through on the elements introduced here. The Green Lantern Corps. get a cameo, Darkseid and the New Gods are mentioned and, after the credits have rolled, Deathstroke turns up for a chat with Lex Luthor, thankfully missing up till now. I still think Jesse Eisenberg is dreadfully miscast as Luthor, but he might just work as part of the Legion of Doom/Crime Syndicate/Injustice League or whatever. Here's looking forward to some more fun films from DC in future.
Posted by Daniel Tessier at 19:22