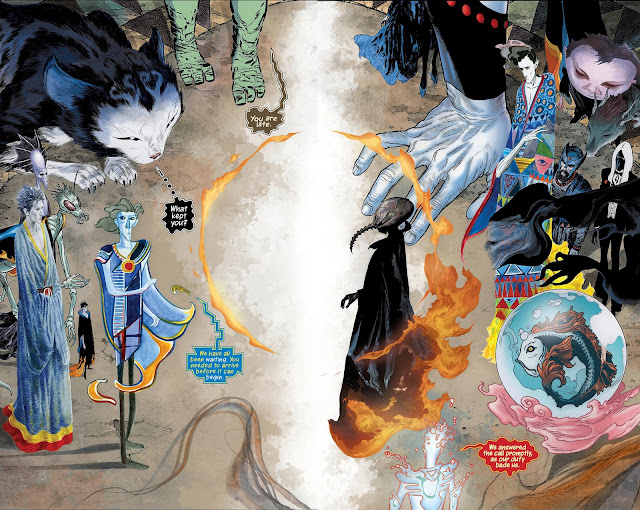 The Sandman never needed a prequel series. Really, it never needed any sequels, spin-offs or additional volumes at all, being a perfectly told epic in itself. Nonetheless, some of the extra material has been amazing, not least Death: The High Cost of Living and the original run of Lucifer. Having Gaiman back to write the untold backstory of Dream's imprisonment that created the entire story of The Sandman is exciting, but there's always the risk, as with anything of this nature, that the result will be disappointing. The Sandman was so remarkable that any attempt to revisit it will struggle to recapture the magic. Going back to explain it all is even more dangerous, since the mystery of the Endless and their origins is crucial to the appeal of the story.

A troubled publication schedule put me off Sandman: Overture about halfway through, but I suspected that it would read better in collected form. It's taken me a while to actually get round to picking the trade up, but now I have done, and I can happily confirm that Overture is a worthy successor (should that be precursor?) to the original Sandman. Gaiman pulls together a story on a truly epic scale that only really shines through when taken in as one mighty volume. It's also vital that it be read in good old-fashioned paper format, since J. H. Williams uses an artistic style that goes everywhere, in every direction, and at several points requires the book to be rotated or flipped upside-down in order to follow the sequence of events or dialogue, and that just doesn't work on a computer screen.

Williams's artwork, in combination with Dave Stewart's colours, creates a bold and powerful visual universe which is vital for Gaiman's storytelling to shine through. The key word for this story is scope. So many prequels fail by limiting the imagination of the reader/viewer by filling in too much of what might have come before. Overture expands the Vertigo universe, taking Sandman into broader, more science-fictional realms than before, giving everything a truly cosmic feel. Taking place, as Gaiman says, after Endless Nights and before Preludes and Nocturnes, Overture twists history around and brings Dream's new incarnation, Daniel, into the storyline in a vital aspect. The risk of limiting the character of Dream is averted by the most celebrated moment in the story, in which Morpheus is brought face-to-face with infinite variations of himself, in all manner of guises.

Overture takes on Endless Nights's best story and expands it by revisiting the City of the Stars, a realm that truly appears to be constructed from light, and makes it the core of the story. Billions of years earlier, Dream, or an aspect of him, failed to snuff out an insane star, leading to the imminent destruction of the universe in the present. Through his quest to put things right we visit more realms than ever before, with the other Endless taking part in events in different roles. More contentiously, we meet Dream's parents. Given that the Endless are siblings, it makes sense that there would also be parents involved, but their existence as distinct characters could have been the worst thing for Gaiman to show. Instead, Father Time and Mother Night are depicted as enormously powerful and remote beings who add to the mystery of the Endless. (They may also be viewed as the DC equivalents of Infinity and Eternity, and Gaiman's enough of a Marvel fan to have intended this.) There's even Dusk, who might just be another sister of the extended Endless family.

Even with the universe tearing itself apart in entropy and war, Gaiman keeps the story working at a personal level by pairing Dream up, for much of the voyage, with the orphaned alien girl, Hope Beautiful. To begin with she comes across as a slightly twee, spunky kid, but avoids becoming a generic character by meeting her own tragic end and then playing a vital part in the revitalisation of the universe. The balance between the cosmic and the personal is balanced well, reflecting how Dream is at once a small, flawed individual and the very essence of imagination in the universe.


Overture is far stronger when read as a novel, rather than a series of issues, and skirts that fine line between telling us too much and telling us just enough to keep the mystery interesting. I could definitely stand to see no more Sandman ever after this, though; Overture bookends The Sandman in a perfect ouroboros that should never be broken.
Posted by Daniel Tessier at 15:08