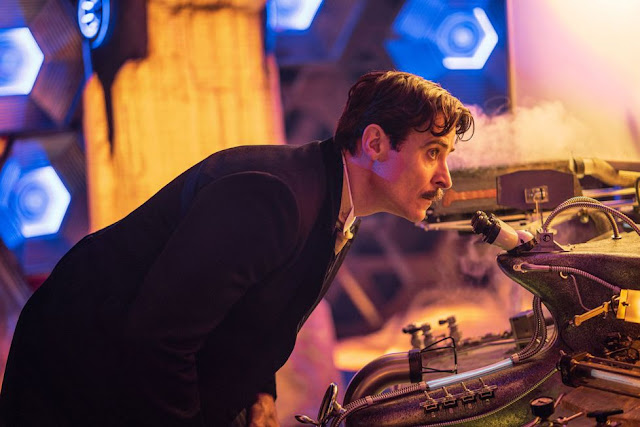 That was a great little story. I like that we've gone back to the celebrity historicals - fun romps with a charismatic figure from history and an alien threat. Last season we had "The Witchfinders," which was one of the better episodes of the year. "Rosa" was a more serious story, as close as we've gotten to a pure historical since 2005, but had some similarities to this episode.

Nikola Tesla is the perfect historical figure for Doctor Who to feature. The gentleman inventor is a character trope that goes right back to the beginnings of the Doctor - that's essentially how Doctor was first characterised, and an element that has been introduced back into the Doctor's performance with Whittaker's incarnation. Of course the Doctor is going to be a huge Tesla fan. Setting an episode during the "Current War" - the legendary rivalry between Nikola "AC" Tesla and Thomas "DC" Edison - is the sort of historical story I really enjoy. This series we seem to have something of a theme of the history of electronics and computing, following on from Ada Lovelace and Noor Khan to Tesla and Edison.

It's the sort of historical situation that is ripe for exploration on Doctor Who - absolutely within its themes but not terribly well known. There's been a big resurgence in Tesla enthusiasm in recent years, with a lot of fictionalised versions of him appearing on steampunky sci-fi productions, but when it comes to his actual history, he's still little known  by most people. The educational aspect of Doctor Who, there at the very beginning, is a strong element of this latest iteration of the show and a welcome one.


Goran Višnjić is absolutely spot on as Tesla. He's made up to look physically almost identical to him, and is essentially of the same nationality (Višnjić is a Croatian-American, Tesla was Serbian-American, but both were born in what is now Croatia and was under a greater country's control at the time). It's his performance though that makes Tesla such a compelling character in this episode - eccentric, bewitched by the possibilities of technology and quietly passionate. Just as good is Robert Glenister as Edison - the more famous of the two inventors, as the script is happy to point out. He plays him with a gleeful arrogance, and to be honest, the script really eviscerates Edison for much of the episode. True, Edison was a capitalist of the first order, but he was also a brilliant inventor in his own right and, arguably, made more of a direct impact on history than Tesla. That said, he at least gets to argue his case, and he is shown to have genuine compassion for his staff, even if he is a dickhead to Tesla (who, lets be fair, was no saint himself).

The TARDIS fam is used pretty well throughout here. It still feels like the writers are struggling a bit with finding something for them all to do, but Nina Metivier manages it better than most. Yaz gets to pair off with Tesla for her own mini-adventure, while Graham backs up the Doctor and Ryan gets some nice character moments with Dorothy (Haley McGee). It still feels a bit overstuffed - you could manage this story happily with the Doctor, Dorothy, Tesla and Edison and none of the regular companions - ut on the whole it works.

As do the Skithra. Yes, they're an awful lot like the Racnoss, with the Skithra Queen both looking and sounding reminiscent of the Racnoss Empress, but "The Christmas Invasion" was over thirteen years ago, so it's been long enough. Plus, Anjli Mohindra's performance as the Queen is pretty great, and a lot subtler than Sarah Parrish's as the Empress, even if she is channelling a lot of the same tics. I feel like the two species are probably related in-universe. The Skithra are conceptually quite different, though; if anything, as scavengers they're more like the Santa robots that the Racnoss co-opted than the Racnoss themselves. I like the idea that there are loads of alien chancers hanging around primitive planets waiting to nick stuff off more advanced passers-by, safe in the knowledge they probably won't get caught.

On the other hand, there are some conceptual problems with the Skithra. They're said to have a hive mind, something that is used against them in their defeat, but they don't act like they do. Sure, they have a humanoid(ish) Queen and a bunch of scorpion-like drones, but the drones seem to have distinct personalities and self-awareness. It also seems like Metivier is trying to draw a parallel between Edison using his employees' inventions to make money, and the Skithra stealing technology from other races rather than building it themselves, but they're not really equivalent.

There are some other little quibbles - where did that Silurian gun come from, for instance? - but it's hardly the first time a decent Doctor Who romp failed to make sense when looked at closely. This was a lot of fun, and I'm not arguing with that.

Maketh the woman: The companion trio all get kitted out in early 20th century outfits, all perfectly chosen to suit the actors, but the Doctor just wears her usual gear. After the black tie twist in Skyfall, I'd been looking forward to Thirteen in a period costume for a change.

Ethics is my manor: There's a serious problem with the Doctor's morals here. She forcibly wipes Ada Lovelace's memories to protect her memory, against her protestations, but let's Edison and Tesla carry on after seeing the TARDIS, alien technology and all sorts of history-damaging things. Alternatively maybe it's inconsistent writing, more evidence for needing a decent script editor to take his marker to this series.

Whose face is this? Robert Glenister previously appeared on Doctor Who as Salateen in the 184 classic The Caves of Androzani. Anjli Mohindra was, of course, Rani Chandra for four seasons of The Sarah Jane Adventures.

Title Tattle: Yeah, that's a lovely title, but I'd have gone with "Current Affairs."

Oh look, rocks: One thing Tesla has in common with Rosa Parks: they both have asteroids named after them. So does Edison, as it happens.