WHO REVIEW CATCH-UP: Out of Time 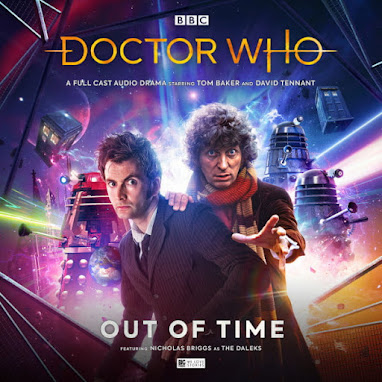 Out of Time is the first in a trilogy of audios from Big Finish, which are each going to be released a year apart - pretty restrained for the company, who normally chuck out a major box set every couple of months when there's something significant to shout about. Each one features the Tenth Doctor teaming up with a classic series incarnation, and a fan favourite monster. Next year we'll have The Gates of Hell with David Tennant and his father-in-law against the Cybermen, followed by Wink in 2022 with Colin Baker and the Weeping Angels.

First though is Out of Time itself, which sees Tennant team up with Fourth Doctor Tom Baker. This is, of course, a big thing, with the two most popular Doctors by any reasonable measure joining together for an adventure. This doesn't, however, automatically mean it's going to be any good, although you'd at least expect it to be pretty entertaining. Which, in all fairness, it is. It's a slight story, more of a runaround than anything, but then again, does a release like this need to be anything else?

The Tenth Doctor pops in for a visit at the Cathedral of Contemplation, a huge, mysterious structure outside of time where anyone from any era can attend for solace. He's in a mood because he's avoiding his impending regeneration, and has gone there on his big holiday before facing The End of Time. However, the Fourth Doctor is already there, having picked up a temporary travelling companion in the form of Private Jora (Kathryn Drysdale), a young deserter from the 26th century.

There's some enjoyable farce as the Tenth Doctor avoids (poorly) letting on who he is to his earlier self, while secretly hoping he'll work it out. It doesn't take Four too long to get the measure of him, and he pretty quickly squashes Ten's sulk about the future. Four's meeting himself in a new form, and for him, it's confirmation that he'll survive, whereas for Ten regeneration is death.

However, Jora's space commander dad turns up looking for her, followed by a phalanx of Daleks, leading to the two Doctors working together to run rings around them as they plan to use the temporal powers of the Cathedral to invade the Earth and win the war. The Doctors' eventual victory is pretty cunning.

While there's nothing really unusual or outstanding here, it's a pretty fun little adventure, livened up by some wonderful chemistry between two beloved Doctors who, for the most part, keep on the right side of self-parody while doing a bit of a best-of performance. And after all, isn't that why we're here anyway?

"More like apres-deva-vu: knowing what's going to happen but only after it does. Maybe it's always like this when I run into them... well, I wouldn't remember."

"Old school? I prefer to think of myself as classic!"

For the Fourth Doctor, in the period between The Deadly Assassin and The Face of Evil. For the Tenth Doctor, during the gap between The Waters of Mars and The End of Time, but presumably after the Time Lord Victorious period. For the Daleks, the 26th century, in the Second Dalek War that followed Frontier in Space - except that they're Time War Daleks, so presumably travelling back along their own timeline, which ties into the events of the novel Prisoner of the Daleks.