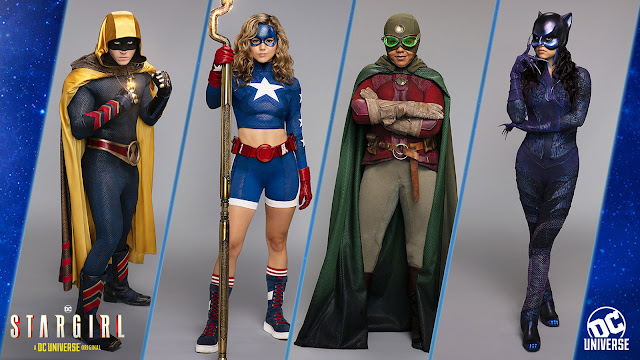 The CW and DC's Stargirl made it to Amazon Prime in the UK just over a week ago; Suz and I sat down to watch it not long after and finished the series in three days. It's a real delight; nothing spectacularly new, but a well made, heartwarming and, above all, fun superhero show. It brings to mind the early seasons of Supergirl and The Flash, before they got caught up in their own angst.

We first saw this version of Stargirl in a brief cameo at the end of Crisis of Infinite Earths. The original Earth-Two (or elements of it at least) has been seemingly folded into the Prime Earth continuity, and a new Earth-Two was presented. This is where the Justice Society of America was the primary superhero team, making it more like the Earth-Two of the comics. We've already seen a version of the JSA, who operated in the 1930s and '40s of Earth-One, on Legends of Tomorrow, where Stargirl was played by Sarah Grey. On Earth-Two, though, the JSA was active in the 21st century, although there was still a retro-vibe to them.

The series kicks off with a gripping scene in which the villainous Brainwave kills off the entirety of the JSA, with the exception of Starman's sidekick, Pat Dugan. It's a hell of an opening and pulls me right into the series straight away. We then rejoin this world ten years later, when Dugan and his family are moving to the town of Blue Valley - which just so happens to be his wife's hometown and the location of the villainous Injustice Society's base of operations. It's extremely silly, but the series embraces the silliness. It hits exactly the right balance - accepting the daftness of the premise but playing completely straight.

Pat Dugan is played by Luke Wilson, forever to be known as Owen Wilson's younger brother, and he brings a real warmth and charm to the role. He's a decent natured everyman who just happens to have a past as a superhero sidekick (an honorable role, he's quick to point out). His stepdaughter, Courtney Whitmore, is played by Brec Bassinger, who has a lot of charm and presence and brings a very optimistic feel to the series. They make for an excellent leading pair, centring the ensemble cast. Courtney might just be the daughter of the original Starman, and in any case, when she uncovers the Cosmic Staff - a seemingly intelligent weapon and tool - it bonds with her, recognising her pure heart and self belief. Pat isn't exactly thrilled she's found the JSA relics he's been carrying around, but it's hardly like he was going to be able to keep this stuff secret forever.

It doesn't take Courtney long to go from alienated teen to superhero. It's pretty blindingly fast actually, and she's kitted up in her own outfit in no time (I enjoyed her making her own adjustments to Starman's costume; it reminded me of the old days when Peter Parker used to do his own alterations at home). Pat, who was originally the hero Stripesy, adopts the slightly less absurd name STRIPE for when he's in his huge robotic battle suit. Now, I know he's a mechanic, but how he managed to keep that a secret during the move is anyone's guess. Still, seeing STRIPE to make his first appearance was the most triumphant part of the opening episode, and well worth the anticipation.

Part of what made this series so enjoyable for me is the fact that I'm not as familiar with the JSA - or their precursors, the Seven Soldiers of Victory - as I am with the Justice League or other more popular heroes. I know enough to make the reveals of the characters' backgrounds and the identities of the villains exciting, but many of them were new to me. Even the ones I knew aren't characters I'm super familiar with, so the series feels fresher than, say, a new version of Superman or Spider-Man would, or even something like Runaways. I guess a real DC diehard would have known who everyone was going to turn out to be, but there were more surprises for me.

Now, I do know that Starman is one of DC's many legacy characters, but Sylvester Pembleton, the Star-Spangled Kid, was never one of them in the comics. However, conflating the two characters makes a lot of sense, especially as in the comics Courtney went from being the second SSK to becoming Stargirl when she acquired the Cosmic Rod. This sort of streamlining is common in comic adaptations and it makes the backstory here easy enough to take on. I learned a lot more about Stargirl reading up after the watch through. It so happens that Brec Bassinger was born in 1999, the same year Courtney Whitmore was created (she plays her younger, at about fifteen). This might also have something to do with the wonderfully nineties soundtrack to the series, which adds to the retro vibe - it's basically the same as having 1940s heroes revived for comics in the seventies. I also had no idea that Geoff Johns - who created the character and also acts as showrunner here - named Courtney for and based her on his sister, who was killed in the Flight 800 disaster in 1996. It must have made creating this series a very personal project for him.

Bassinger is a worthy Stargirl for sure, but she needs her own JSA, and sets up recruiting new team members from the local teens. There's a bit of a Buffy vibe to this, a little bit of Smallville, even a touch of the Power Rangers to it. This stuff works, so why not use it. Thew new JSA take on the mantles of the classic heroes, sometimes due to inheritance (Cameron Gellman as the surly Rick Tyler, the new Hourman) other times due to affinity with the technology (Anjelika Washington, the hyper-enthusiastic Beth Chapel as the new Dr. Midnite). They're all loners and outsiders for one reason or another. Most affecting is Yolanda Montez's story. Played by the truly stunning Yvette Monreal, Yolanda in this version was a popular girl at school and headed to be class president until her boyfriend leaked nudes that she had sent him, leading her to be mocked and bullied at school and virtually disowned by her religious parents. (I honestly hate them more than any of the Injustice Society villains.) Monreal gives a very deep and believable performance that brings light to this important and ongoing issue in schools today, one that seems particularly prevalent in the States. Yolanda becomes the new Wildcat, taking after her hero Ted Knight. That's another element I like - Yolanda is already a boxer and Courtney is already a talented gymnast, which gives the skills to bring to the table even before they acquire superhero kit.

The rest of the supporting cast are all very good as well. Shout out to Trae Romano, who plays Pat's son/Courtney's stepbrother Mike, and who has more character in one scene than most child actors manage in a career. (I've said this before, but there really are some exceptional young actors starting their careers right now.) Amy Smart, a familiar face in movies in the nineties, plays Barbara, Courtney's mum/Pat's wife, with a lot of humour and class. It looks for a moment like she's going to go down the Buffy's mum route, refusing to believe the evidence of her own eyes, but as soon as she's confronted with the weirdness around her, she accepts it and joins the fray.

The villains are strong as well. Without going through everyone, there's a good mic of the outlandishly evil and the more nuanced. Most notable is Neil Jackson as Jordan Mahkent, aka Icicle. On the outside he's a committed liberal politician and family man, but underneath he's a heartless monster seemingly drawn from the depths of Niflheim. But underneath that, he's... actually a committed liberal politician and family man. Jackson's performance helps a great deal, but there's also some intelligent writing here, and while many of the Injustice Society are clearly opportunistic villains, Icicle is torn by his goals and his actions. When we find out what the ISA actually want, it makes things far more complicated, since their goals are absolutely right and just. There's an interesting argument to be had about whether the ends can justify the means, but even so, I feel that if Icicle had just come clean to the new JSA, made up of forward-thinking kids, he might have won some of them round.

Also worth singling out is Jake Austin Walker as Henry King Jr, the son of Brainwave. Initially he appears to be a generic jock character, the sort of thuggish bully who gets by on his looks and sporting prowess, and the fact that he's the bastard who shared Yolanda's pictures around supports this. Before long, though, a much deeper character emerges, one who's terrorised by his father and ashamed of his own actions. He becomes one of the more interesting characters. Less effective is Cindy Burman, his new girlfriend and current queen of the school. Meg De Lacey gives a perfectly good performance and she's a fine foil for Courtney, but making the stereotypical mean girl a supervillain is predictably obvious. I can't help compare it back to Buffy again, where the mean girl popularity queen became a hero. Still, Cindy has her own horrors in her background and looks like she's set up for a big role in season two, so we might see more sides to her going forward.

Stargirl is tremendous fun and a real family show, but it doesn't shy away from serious issues and gets pretty heavy towards the season's end. It also looks absolutely amazing, honestly some of the most visually impressive TV I've seen. At a compact thirteen episodes, it doesn't drag on like many of these shows. Definitely worth seeking out if you're a superhero fan.