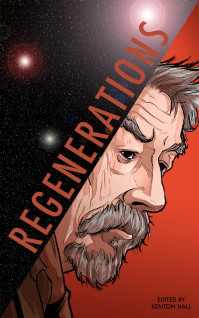 The Time War is perhaps the perfect backdrop for Doctor Who fanfic. It provides enormous scope and possibility, the highest of stakes and a constant background threat. More than that, though, is the very nature of time as the field of war means that characters from any era of the series' history can justifiably appear, and continuity needn't be a burden if a story can't quite “fit.” If there's any time to break the rules, it's during a time war.

Regenerations from Chinbeard Books, (publisher of Seasons of War) returns to the Time War in the midst of its darkest hour, and uses it as a way to look at the Doctor's lives through different lenses. When the possibility of Dalek victory in the War becomes too likely, Rassilon sanctions a desperate gambit: change the Doctor's history to prevent the War from beginning. By preventing what Lance Parkin called “Last Contact” - the first meeting between the Doctor and the Daleks – the malevolent pepperpots will never become obsessed with alien life and time travel and the War will never come to pass.

Naturally, things do not go as simply as planned. Regenerations sees the Doctor's timeline unravel, presenting us with well-remembered stories from the series twisted into new forms. As history is altered, there isn't even a consistent timeline between these stories – they may follow on, or they may contradict each other, but each one sees a classic story bent out of shape by the manipulation of history.

Kenton Hall edits the collection and also writes the overarching story, which follows the War Doctor as he moves from a galactic crisis to dealing with his own past unravelling. A triplicate story starts the collection off, with “The Shallow Stage” setting the cosmic scene before we're wrenched back to the very beginning in “The Untrustworthy Child,” an ingenious rewriting of the very first Doctor Who story, before the consequences are explored in “The Hidden Well.” Hall takes us back to the War Doctor's travails several throughout the book, and also introduces two new characters, the young Time Lords Jelsillon and Dyliss. These two become honorary companions for the collection, their stories woven into the Doctor's timeline at the outset with dire consequences for all of them.

From there we move along the Doctor's mangled timeline, stopping first with the Second Doctor in “Time of the Cybermen” by Dan Barratt. A clever reversal of the central conceit of The Tomb of the Cybermen, Barratt's story gives us a glimpse of the Cyberwars we often heard about but so rarely saw on the series, in a gripping adventure. Things get more peculiar in “The Paradoxical Affair at Styles,”a new take on Day of the Daleks by Andrew Lawston. To begin with, while the details are different, the overall story seems much the same as the classic serial, perhaps with more of a side of humour. But as it progresses, the Time War encroaches upon it as Gallifrey attempts to intervene in the Daleks' history.

The Doctor's role in Dalek history is very much the focus of Alan Ronald's story, “Terminus of the Daleks,” which presents a reality where the Fourth Doctor decided he very much did have the right. At least, that's what the Time Lords believe, so much so that on Gallifrey they hold theatrical productions of the their own version of Genesis of the Daleks. The fictionalisation of history is just as much a theme in the collection as its outright rewriting, and “Terminus” balances both to become my favourite story in the book. I couldn't help but imagine the faux Doctor as played by John Culshaw.

“Shockwave” by duo Simon A. Brett and Lee Rawlings is another nifty tale of changing history, giving us a reality where Adric managed to die in a completely different way in Earthshock. The consequences are a version of Time-Flight that is, shockingly, really very good, as timelines converge at Heathrow with Tegan baring the brunt of the chaos. After all, had the freighter not crashed circa 65 million BC, Earth's history would be very different indeed. It's a very funny story but it has a nasty sting in the tail.

Christine Grit's story “Revelation,” is, as you might guess, a reworking of Revelation of the Daleks, somehow even nastier than the original. By this point things are becoming very odd, and the story sees the Sixth Doctor and Adric arrive on Necros. The Doctor can feel something's wrong with his timeline by now but is powerless to do anything about it. “Revelation” becomes even more Sixey when the Rani shows up, her story continuing in “Enter the Rani” by Target Trawler Nick Mellish. This story takes the infamously dreadful Time and the Rani and turns it into something that's honestly brilliant – more than that, it turns it into something that makes sense. With a wicked sense of humour, a truly vicious examination of the Rani's cruelty and better-written Mel than I've ever seen, it's another highlight for me.

The further along we go, the more the War Doctor's central story comes into focus, and we learn that the villain behind the masterplan isn't who we expected (but is utterly in keeping with the themes of the book). A diversion back to the Eighth Doctor's first and last moments keeps the experiment running. “The Edge of the War” is this broken universe's equivalent of the TV Movie, one that spends far more time looking at things from the Master's and Grace's point of view. This version of the story moves in a very different and brilliant direction, and the Doctor gets absolutely owned for laying kisses on unwary surgeons. “The Flight of the Doctor” sees the Eighth Doctor's arrival on the War's outskirts and on Karn play out differently, with Barnaby Eaton-Jones telling a different story to Moffat, albeit one with just as many brilliant lines.

Hall comes back to wrap things up in “The Weight of the Doctor,” which storms through the new series – the future, of course, from the protagonist's point of view – bringing the timeline as up-to-date as you could possibly want as the Doctor rights the wrongs of his own reality. Regenerations is based on a very clever concept, but without such a strong selection of stories the idea would be wasted. An excellent fanthology.

The Regenerations ebook can be purchased from Chinbeard Books here, with all proceeds going to Invest in ME.