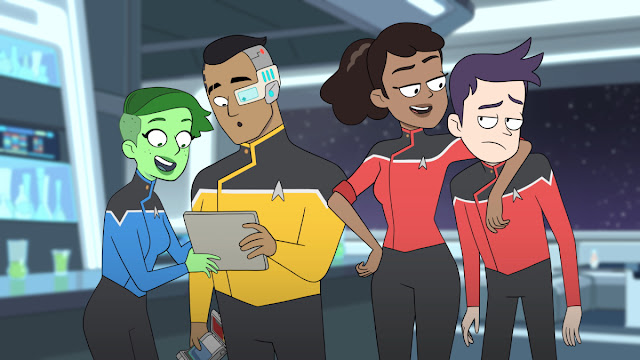 The first episode of the new animated comedy series Star Trek: Lower Decks has now been released for streaming on CBS Access, beginning a run of new Star Trek episodes that will last twenty-three weeks (the full first season of Lower Decks and the third season of Star Trek: Discovery). Lower Decks is, remarkably, the ninth full Star Trek series (tenth if you count the companion series Short Treks). The return of Star Trek to an animated format is a pretty big deal. Short Treks had a couple of very good animated episodes which experimented with different styles, but when most people think of a Trek cartoon, they'll think of the 1970s Star Trek: The Animated Series. This is definitely worth a look if you're a Trek fan, but it conjured up images of cheap, jerky animation and simplistic morals for kids.

Lower Decks is something else entirely. While there's also an animated adventure series in the works (the recently named Star Trek: Prodigy), Lower Decks is an adult comedy series. That's not to say it's entirely unsuitable for a family audience, at least based on the first episode, but it's clearly aimed at older teens to adults, and specifically at established Trek fans.

Created and run by Mike McMahan, who also wrote the excellent Short Trek “The Escape Artist,”but is best known for working on Rick and Morty (plus earlier on South Park and other animated comedies). Based on early descriptions and the series trailer, I expected Lower Decks to be a lot more Rick and Morty-esque than it's turned out to be. Admittedly, there's a lot of episodes to come yet and we might get an episode based on horny dragons or a breast-enlargement ray, but I think it's unlikely. The first episode of Lower Decks is, if not a laugh-a-minute, a pretty solid barrage of gags, but it's pretty much on the right side of the grown-up/puerile divide. The smuttiest joke is the All-Nude Olympic Training holodeck program, and that's pretty mild.

First and foremost, though, this is a Star Trek series, and McMahan is clearly a huge Trek fan. Everything in the episode screams “Star Trek!” from the design of the USS Cerritos to the obscure-as-hell references to Klingon culture. There are recognisable alien races throughout – Ensign Tendi is an Orion, Lt. Shaxs is a big, burly Bajoran, Dr. T'Ana is a Caitian, and there are Trill, Benzites and more on the ship. There are references to a ton of classic Trek stories – in fact, Ensign Mariner dumps a ton of them at the end of the episode, just to make sure we know this is made by bona fide Trekkies.

The concept of the series is brilliant. The USS Cerritos – a new kind of starship, the California-class which looks like a TNG-era kitbash – specialises in “Second Contact,” the slightly less important follow-up mission after first contact. Which, when you think about it, is actually very important. It's joked away as getting the spelling of the alien planets right, but doing the serious diplomatic and logistic stuff is pretty essential. Still, it's not as glamorous as missions of discovery on the USS Enterprise.

The main characters aren't the bridge crew, the characters we'd normally follow, but the derisively-termed “lower decks,” the bottom-rank newbies and jobbing maintenance people. And while you might sneer at them, if they're not working, your replicator doesn't get fixed and is stuck on the “Hot Banana” setting forever. Following the lower-ranked characters who just want to do their jobs with the minimum hassle is such a different spin on a Trek series that it makes it seem fresh, even though this isn't far off the 800th episode in the franchise.

The main characters are all likeable. Ensign Beckett Mariner (Tawny Newsome) is pretty much the hero of the episode, a busted-down officer who resents the higher ranks and mostly wants to enjoy her shore leave. She's insanely overexcitable and would quickly become unbearable in real life but she's magnetic for a half hour episode, and she's secretly a moral and inventive officer with an exhaustive knowledge and experience. She just doesn't like having to justify herself to anyone.

Ensign Brad Boimler (Jack Quaid) is the jobsworth, career-minded one, serious about doing things by the book and advancing up the ranks, but he's there for Mariner even when he should be reporting her for breaching regulations (usually for all the right reasons). He develops a fair bit even in this episode, so I suspect we'll see a lot more progression for his character (a tenner says he gets a promotion to lieutenant by the end of the season, which will change the dynamic totally).

Ensign D'Vana Tendi (Noel Wells) is the fresh-faced, bright-eyed new recruit on her first assignment. We don't get to see so much of her in this episode, but her enthusiasm for her posting as a medical officer is infectious, even as she's fighting off goop-spewing zombies. Ensign Sam Rutherford (Eugene Cordero) rounds off the main four. He's an engineer and a cyborg, which makes for an interesting sort of addition to the series, and he's struggling with his new Vulcan-implant which keeps trying to suppress his emotions. He's romantic but way to into his work for his own good.

That's not to say we don't see much of the bridge crew, just that they're not the focus and they're generally seen through the eyes of the ensigns. Captain Carol Freeman (Dawnn Lewis) is a by-the-book sort who seems to have a vendetta against Mariner, and well, I won't spoil it but you'll guess why easily enough. Commander Jack Ransom (Jerry O'Connell) is the first officer and as arrogant as someone with the name Jack Ransom has to be, while Lt. Shaxs (Fred Tatasciore) is the trigger-happy tactical officer. Dr. T'Ana (Gillian Rigsom) is basically a fuzzy Bones.

There's a lot going on in this episode, almost too much, and it belts from introducing the characters to events on the planet Galar (home to the purple, piggy Galadornians) to a zombie plague caused by an insect bite raging through the ship, with the subplots for Rutherford's date and Tendi's first day in sickbay getting sidetracked by the zombies. There's a fair bit of gross-out humour – the most Rick and Morty-like part of it – with a weirdly long scene involving Boimler being “suckled” by a giant spider-cow. Most of the comedy, though, comes from the character interactions and their clashing personalities, and a gentle poking fun at Star Trek's tropes. It never comes across as mocking Trek, though; it's all well-observed humour of the sort that fans have been making for years. It's really refreshing to see it on the screen (outside of Futurama).

Whether someone new to Trek would enjoy it is another question. A lot of the in-jokes will be lost on them, of course, but the basics of the episode are pretty straightforward and I think anyone with at least a passing experience of sci-fi adventures would get it. There are bound to be die-hard Trekkies who hate it simply for being a comedy, and plenty more who just don't enjoy the style of humour it has to offer. Personally, I loved it, and I can only see it getting funnier as we get to know the characters more. And the Monkees joke was perfect.

The episode ends with a swift “coming up” trailer for the season as a whole, which promises some exciting adventures and some recognisable alien races. Did I spy an 8472 there?

We only visit one planet in the episode, Galar, but we also see a recreation of Orion on the holodeck - the first time we've ever seen the Orion homeword onscreen (the planet recreated in "The Cage" was described as an Orion colony).

While we've seen several Orions in Starfleet in the Kelvin Timeline, Tendi is the first we've seen in the Prime Timeline, and makes for a rare appearance by an Orion in the TNG-era.

Lower Decks is set in 2380, a year after Star Trek Nemesis, although the design looks a lot more like TNG-era proper. I've stopped trying to make sense of the uniforms in Trek, and the Cerritos crew wear a different uniform to either the late 2370s version seen from First Contact to Nemesis and in late DS9, and the early 2380s one seen in flashback scenes in Picard. We have seen different ships using different uniform variants concurrently in Trek a few times though.

Captain Freeman is the first black female captain to head the main ship in a Star Trek series.

The voice cast has some solid genre experience: Tawny Newsome is Captain Ali in Space Force; Jack Quaid is Hughie in The Boys and Marvel in The Hunger Games; Noel Wells voiced Jibralta in Kipo; Eugene Cordero is in Kong: Skull Island and The Mandalorian. Fred Tatasciore has done a ton of genre voice work, too numerous to list. Jerry O'Connell is immediately recognisable to 90s sf fans; he was Quinn Mallory on Sliders, and he happens to be married to Rebecca Romijn, who plays the new Number One in Discovery and Strange New Worlds, which I think is the first time two first officers from Trek have been married in real life. Phil Lamarr, who voices the Admiral, was Hermes Conrad on Futurama, Rag Doll on The Flash and Malefic J'onzz on Supergirl, plus has plenty of voice credits including Rick and Morty.