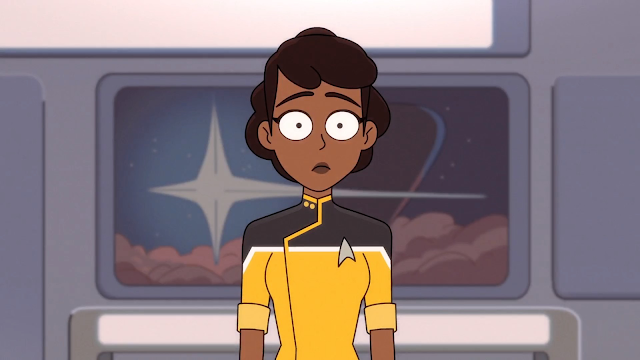 This week's installment is a fairly strong Trek adventure with an interesting central sci-fi concept, around which there's some promising character work for some of the regulars. For a change, Ensign Boimler takes something of a back seat for the episode, with Ensigns Mariner and Tendi being the main focus of the story.

For a series apparently about life on the Lower Decks, the low-ranking main characters spend a lot of time on the bridge and in the ready room. Right at the beginning, Mariner is present for Captain Freeman's briefing of the senior staff for this week's mission, interrupting the rather dull discourse with guest Captain Durango with an unstifled yawn. It's played up for laughs but it's a relatable moment; we've all been in a meeting or lecture where we can't help but yawn due to the lack of mental stimulation (in fact, I've gotten to the nodding-off stage in meetings more than once). It sets up the main thread of the episode, with the captain at loggerheads with her daughter for her unprofessionalism and disrespect.

Freeman can't just have Mariner transferred, because that would show her up in front of her ex-husband (the admiral who transferred their daughter there in the first place, naturally). Commander Ransom suggests just victimising her with the worst assignments imaginable until she asks for a transfer herself. Cue a montage of revolting and tedious jobs, including emptying the waste tanks on the holodeck, which are full of stuff so disgusting it has to be bleeped out of the dialogue. Fans have been joking about the obvious use of the holodeck and wondering about the poor sap who has to mop up afterwards, but previous versions of the franchise would barely even hint at it (except maybe some of Quark's dodgier holosuite programs and the Doctor's pon farr treatment). Lower Decks has licence to say the thing we've been thinking all these years, and is all the funnier and more believable for it.

However, Mariner finds ways to make the menial jobs competitive and fun, so Freeman tries a different tactic: promoting her to Lieutenant and making her part of the senior officer team. It's very funny watching Mariner losing her mind due to the boredom of the day-to-day work and play of the command team, in a sequence that poke fun at the endless meetings of The Next Generation and Voyager and particularly the off-hours activities of the TNG crew. They were amazing characters, but the TNG officers often came off as sticks-in-the-mud when it came to leisure time. It seemed like in the 24th century the only music allowed was jazz and opera, and that playing poker was the favourite game in a society apparently without money. The Cerritos officers are the same but worse, with Mariner having less fun playing cards with them than she had scraping carbon deposits off the ship.

Meanwhile, Tendi finds herself drawn to/rivals with Lt O'Connor, who has been preparing himself (allegedly) to ascend to a higher plane of existence. This is the sort of thing only the most remarkable characters ever manage on Trek (although there are plenty of villainous incorporealised beings out there to plague Starfleet as well). Tendi's enthusiastic interruption seemingly screws up the intended metamorphosis, leading to her trying to force O'Connor onto the next plane of existence by using every spiritual technique at once. It's good to see Tendi get some more characterisation, revealing that her main motivation is her need for everyone to like her, and also showing that her intense enthusiasm can be just as damaging as Mariner's disinterest.

The threat of the week comes from an ancient alien generational ship that's loaded up with a valuable substance that can instantly transform environments – a sort of Genesis device in liquid form. Quite why the aliens would need a generational ship if they can terraform planets so quickly and easily is a mystery, and they're all long dead so no one can ask them. When Durango tries to look better than Freeman and gets too close to the ship, the fluid is released, travelling up the tractor beams (hmmm, really?) into both ships. Cue a race against time in which mother and daughter find some common ground working together, and Tendi and O'Connor realise they're similarities too.

The resolution of the plot is pretty perfunctory, and very like that of the first episode, but it's not really the point of the story. It's the relationships between the characters that's the focus. As Mariner points out, she clearly gets her immaturity from her mother, who has spent a lot of resources on trying to force her daughter out and even childishly claimed Ransom's idea as her own. It's not long before their understanding crashes down and Mariner expertly gets herself demoted (much to Boimler's relief). Elsewhere on the ship, O'Connor suddenly and unexpectedly achieves enlightement, ascending after all – a process that turns out to be far more painful than he expected. This is probably the funniest sequence of the episode, drawn out just long enough to make it absolutely ridiculous, and sees the show at its most Rick and Morty-like so far.

"Moist Vessel" is a pretty decent episode that, unlike "Temporal Edict," works as a Star Trek adventure as well as a comedy. The laughs come from the extremes of the situation and more natural character conflict, and from laughing at the foibles of Trek and its tropes rather than simply referencing them constantly. While there are plenty of nods and winks for fans, the episode would work perfectly well without them.