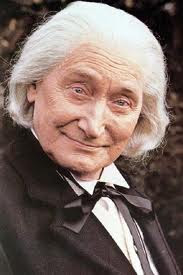 Richars Hurndall’s brief tenure as the Doctor is a rather unique case. In 1983, Doctor Who celebrated its twentieth anniversary with the bumper Doctor-fest The Five Doctors. Of course, in actuality, only three of the established Doctors turned up. Peter Davison was the young incumbent, Patrick Troughton and Jon Pertwee both returned as the second and third incarnations respectively. So far, so straightforward. Tom Baker, having only left the role two years earlier, decided against returning, and William Hartnell was precluded from taking part due to the unfortunate business of having died eight years earlier. Other than some archive footage, neither the first or fourth Doctors were going to appear. So, faced with this, the producers of the show did the unthinkable: they recast the first Doctor.

Other actors had stepped in for Hartnell in the past, but this was the real deal: a new actor taking up the mantle of the first incarnation of the Doctor. Despite opening with a brief snippet of Hartnell taken from The Dalek Invasion of Earth, The Five Doctors would present us with a new first Doctor, ironically the newest actor to take on the role of the series’ leading Time Lord. Richard Hurndall, a seventy-two-year-old actor known for his work for the BBC and Radio Luxembourg was spotted in an episode of Blake’s 7 and was thought to have an uncanny resemblance to the late Hartnell. In actual fact, he doesn’t look much like him at all; but for the kids watching, most of whom knew none the better, this might as well have been the man himself.

In practise, Hurndall doesn’t play the first Doctor we know. By 1983, the Hartnell years were a distant memory and had scarcely been repeated on television. The most recent version of the first Doctor had been the isolated and waspish version seen eleven years earlier in The Three Doctors, the first stab at a multi-Doctor get-together. Terrance Dicks, who had joined the programme during Troughton’s tenure, wrote the first Doctor seemingly as an extrapolation of this version. Hurndall’s Doctor is especially crabby and cantankerous, belittling virtually everyone around him (although in his defense, all the Doctors are especially grouchy in this story). 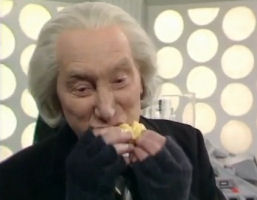 While he wears a recreation of Hartnell’s costume, with a few little changes, such as the new cane and the tatty fingerless gloves, he’s clearly a different man to the one we remember from the first three years of the series. Anyone who had watched the show from the beginning would realise that. To his credit, then, Hurndall doesn’t try to ape Hartnell’s performance. Aside from his scripted claim to be “the original, you might say,” – a moment of absolute cheek – he marks himself as a new version of the Doctor, another incarnation to add to the roster. His inquisitive curiosity overcomes his bad temper, and he takes relish in the puzzles of the Death Zone (“As easy as Pi? As easy as Pi?”). He’s as peculiarly eccentric and patriarchal as any of his other selves, demanding refreshment from the womenfolk and nibbling on the presented fruit salad like an overgrown mouse. Despite his protestations of age, he’s more sprightly than we ever saw Hartnell, even if he does spend most of his time in the relative safety of the TARDIS.

Perhaps most interesting in his reunion with Susan, an event that embraces the roots of the series but is something of a missed opportunity. While we can hardly expect a story so packed with elements to spend time on Susan’s life since the Doctor left her on Earth, it raises an array of questions that remain unanswered. Clearly Susan hasn’t seen her grandfather since he abandoned her, yet she seems to bear him no ill will, instead being overjoyed to see him. She’s aged since then, of course, but who knows if it’s been the same length of time for Susan as it has for actress Carole Ann Ford? Nonetheless, in the presence of her grandfather, she reverts to her adolescent persona very rapidly although the sudden sight of an enraged Dalek can’t have helped her to cope with her unexpected situation. 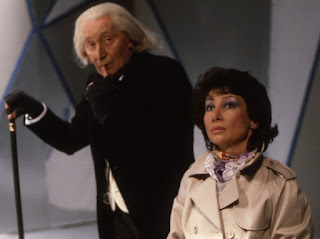 Susan displays no surprise at the existence of other version of the Doctor, as if a meeting with his later iterations was something she always knew might happen. Her meeting with the fifth Doctor, a version of her grandfather played by an actor almost twenty years her junior, is disappointingly skirted over with little comment; indeed, none of the other Doctor’s seem in the slightest bit interested in talking to their one known relative. Susan and the Doctor both recognise the Dark Tower and the Death Zone, confirming that they are aware of the history of Gallifrey, but this is in itself a major digression from the series’ past. In bringing the original Doctor and his companion up to date, their concepts have been massively altered. They are now Gallifreyans, the Doctor, at least, is a Time Lord, and they are now part of this large, intertwined universe that Doctor Who has become.

Hurndall’s Doctor is what we might call, nowadays, an “unbound” Doctor, a sidestep from the original version. We’ve learnt too much about the Doctor’s youth by now for Hurndall’s version to be the same as Hartnell’s sometimes sinister figure of mystery. We’ve heard all about his tech courses with Drax, his doctorate (in whatever discipline it may have been), his time at the Prydonian Academy and his mentorship under the guru who became K’anpo. Interestingly, he doesn’t recognise the Master, although the third Doctor does, even in his new guise. The Master’s reply – “Believe it or not, we were at the Academy together,” – suggests that perhaps the two of them didn’t know each other all that well during that part of their lives. Alternatively, perhaps the Master, in this distant, post-regenerative state, is simply too far removed from the earlier Doctor’s timeline to be recognised.

Also curious is the origin point of this Doctor. As in The Three Doctors, he is picked up from a garden, (in the former story this was actually William Hartnell’s own garden). This “rose garden” has become part of first Doctor mythos now, but where it is and at what point in his life the Doctor found the opportunity to spend time there is unknown. It’s all very mysterious, as is the first Doctor’s greater sagacity compared to his later selves. He’s sees through Rassilon’s tricks when the others are taken in. It does seem that each incarnation much relearn a certain amount of wisdom and prudence. He certainly seems more restrained than his later lives; no wonder he lived so much longer than the others. 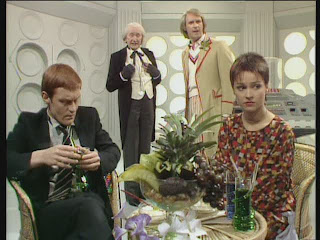 At the end of these events, this quizzical, crotchety versions of the Doctor leaves with Susan, his iteration of the TARDIS, like the second and third Doctors’, splitting off as it dematerialises. Rassilon says that everyone present will be returned to their correct place in space and time, but we never see this. Do the Doctor and Susan part company immediately? This seems to be a strangely unexplored point in the Doctor’s long existence, even now when virtually every possible point of continuity has been expanded on in the expanded universe fiction. Who’s to say they don’t have more adventures together?

Richard Hurndall died mere months after the broadcast of The Five Doctors. Perhaps, if he had lived longer, he would have returned to the role, cementing his place as a bona fide Doctor. Alas, his quirky take on the character is confined to this one television special. He may not have been the first Doctor, but he was a new First Doctor, and his part in the series’ history should not be forgotten.