Rest in Peace, the People's Poet

On Monday, Rik Mayall was found dead. We're all still reeling from this. The first I knew about it was about five minutes after the news broke, my good friend and former Bottom-watching companion Andy texting me as soon as he found out. Then came the barrage of other messages as we all tried to confirm that it was just a rumour, or a hoax, or the silly old bastard playing a prank. But it wasn't. Rik is dead, and we still don't know what happened.

I didn't know Rik Mayall, of course, but he was one of those people who was part of the background of my life. His earliest TV work predates me, so he was already a fixture by the time I was old enough to be aware of such things. Spike Milligan called him "the arsehole of British comedy," something I'm sure Rik found hilarious. And arsehole he was, creating grungy, oily, offensive characters who were as subversive as they were unforgettable. Most often partnered by his best friend and comedy partner Ade Edmondson, (together they were The Dangerous Brothers) Rik was the face of alternative comedy throughout the eighties and nineties. The Young Ones was too early for me to fully appreciate, since its anarchic approach had already had an impact on British comedy by the time I was watching. Even so, nothing ever really approached the chaotic freeness of The Young Ones.

I'm sure Rik would have taken some comfort in knowing that he outlived his nemesis, Bloody Thatcher, by a good year. While Rick, he's Young Ones persona, was an anti-Thatcher anarchist, or at least wanted to be, he was far from being Rik's strongest weapon against the hated Tories. Alan B'Stard, the lead character from The New Statesman, is described on Wikipedia as "a selfish, greedy, dishonest, devious, lecherous, sadistic, ultra-right wing Conservative back-bencher," which more-or-less describes most Conservative back-benchers. A fixture of the late eighties and early nineties, The New Statesman returned as a stageshow in 2006, the new Tory government making it as relevant as ever. Just watch this, and see how close Cameron and crew are to B'Stard's way of thinking:

The New Statesman wasn't written by Mayall, Edmondson or their usual collaborators, Ben Elton and Lise Mayer. More often than not, it was some combination of these four who would create the comedy masterpieces. And more often than not, Rik was called Richie, since there's no point wasting creative energy on thinking of new names all the time. He was Gertude "Richie" Rich in Filthy, Rich and Catflap (Ade was Catflap), and most notoriously, Richard Richard in the insane classic sitcom Bottom. Rik and Ade's three series as disgusting flatmates Richie and Eddie will remain some of my most adored comedy material for the rest of my life. It's a shame Andy and I never pulled our fingers out and did our own amateur staging of our favourite Bottom episode, 'S'Out, especially as my younger self looked an awful lot like Rik's younger self. If you're wondering what I look like, a young Rik Mayall isn't a bad estimate.

We saw, along with fellow Bottomers, the last two of the five live shows, with Rik sweating his arse off on stage as he and Ade dealt out appalling violence to one another. I even got a heckler kicked out (I believe they may have shot him, but that might just have been a sound effect.) Rik's Bottom will always be one of my favourite things to watch. However, even more wonderfully awful, more notorious, more adored, was his other best known character, Flashheart. As Lord Flashheart in Blackadder II, Squadron Leader the Lord Flashheart, the Flying Ace in Blackadder Goes Forth, and their assured ancestor Robin Hood in Blackadder Back and Forth, Rik was absolutely, utterly magnificent. It's almost impossible to credit that this man, the most desirable man who ever lived, was in fact the same as the least desirable, the perpetually un-shagged Richie. Only Rik could produce two polar opposites so memorably. Still, it's worth remembering his uncredited first appearance in the series, as Mad Gerald in the final episode of The Black Adder. 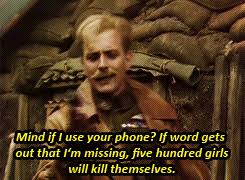 There were so many other characters, from Fred of Drop Dead Fred to Professor Adonis Cnut, the only good thing in Believe Nothing. Rik upstaged everyone, in everything. Even his occasional straight roles were memorably weird, and usually came with a smutty name, such as his occasional role in Jonathan Creek, Detective Inspector Gideon Pryke. And then there were all his many, many voice roles, always unmistakable. He was cut out of Harry Potter and the Philosopher's Stone, though, which just shows what a shit director Christopher Colombus was. He was even supposed to be the villain in the unmade Doctor Who movie The Dark Dimension, although it sounds like he would have been wasted in that too.

In 1998, Rik went and nearly killed himself in a quad bike accident. Seeing him lying prone on the ground by his bike, his wife thought he was joking, but fortunately realised soon enough to get him to hospital for urgent attention. He spent five days in an induced coma, and then some considerable time adjusting to life with an injured brain. Nonetheless, he and Ade wrote the script for the Bottom movie, Guest House Paradiso, while he was in hospital. He returned to acting first with voice work and later onscreen and on stage (Pryke was his first post-crash screen role.) There were rumours of a new series of Bottom, based on the "Hooligan's Island" in the last few years, but Rik and Ade said that they just couldn't work together anymore. Later interviews suggest Rik just wasn't up to the scripting process. Plus, Ade was warned about doing himself serious damage if he kept on with those violent stunts.

We don't yet know how he died. It was possibly something to do with his injury; he remained on daily medication for injury induced epilepsy for the rest of his life. He will be missed by two generations of comedians and fans. Tributes have poured in for him, but the last word should go to his co-conspirator, Ade:

"There were times when Rik and I were writing together when we almost died laughing. They were some of the most carefree, stupid days I ever had, and I feel privileged to have shared them with him. And now he's died for real. Without me. Selfish bastard."
Posted by Daniel Tessier at 14:06