A much-needed update on the latest MCU casting news, including some older news that has only recently been confirmed, or that I just managed to miss off earlier posts. In addition to the below, it's been confirmed that Lupita Nyong'o and Michael B. Jordan have been cast in 2018's Black Panther film, and that Mads Mikkelson is playing a villain in the upcoming Doctor Strange, but none of these actors have had their characters confirmed. 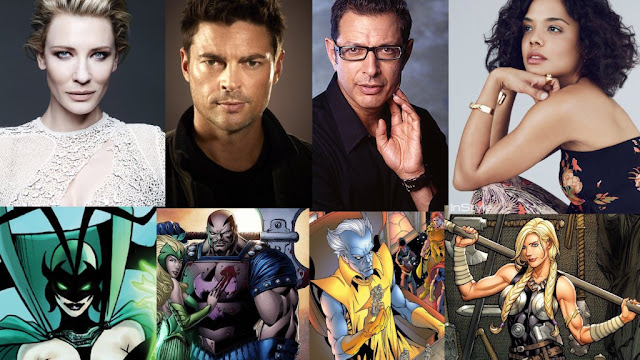 Jeff Goldblum is one of the favourites in my geeky circle, having charmingly mumbled his way through such classics as Jurassic Park, The Fly and Earth Girls Are Easy (we may not all agree on the definition of "classic"). The goggle-eyed legend is to play the Grandmaster, an aeons-old immortal who is one of the Elders of the Universe, a group to whom the Collector (Benicio del Toro in Thor: The Dark World and Guardians of the Galaxy) belongs. This fits in well with claims that the third Thor movie will be more of a cosmic story than the previous two, spending very little time on Earth and more following Thor and the Hulk in other worlds and realms. The Grandmaster likes to challenge "lesser" beings to battle each other, and manipulates primordial powers that sometimes even allow him to turn back death. He once held one of the Infinity Stones, but lost it to Thanos. Expect all of this to have some bearing on the film, as the MCU builds up to Infinity War.

Another favourite in House Geek, Karl the Urbane has already brilliantly brought a comicbook character to life with his unbeatable performance in Dredd, as well as being one of the best things about the new Star Trek films. Always a geek champion, Urban should be suitably impressive as Skurge, one of Thor's most resilient enemies. An Asgardian warrior, Skurge has been a major member of the Masters of Evil (formed by Civil War villain Zemo, although don't expect that link to be made anywhere in the movies). Skurge later allied himself with Thor in the battle of Ragnarok, battled against Hela and has been manipulated in the past by both Loki and the Grandmaster, so there's plenty of material to be incorporated into the latest movie.


Rounding out a trio of spectacularly famous and well-regarded actors for Thor: Ragnarok, Cate Blanchett probably needs no introduction. In case somehow you haven't heard of her, she is the Goddess of Australia and has won awards for roles in The Aviator, Blue Jasmine, Elizabeth and its sequel The Golden Age, Carol and Thank God He Met Lizzie, and basically has so many awards to her name they need a separate wiki article. She appeared in the Lord of the Rings trilogy with the aforementioned Mr Urban and lives down my neck of the woods.

Although her casting in Thor: Ragnarok was revealed a while ago, it was only this month confirmed that she'll be playing Hela, queen of the land of the dead. Hela, or Hel, is the ruler of Niffleheim in Norse mythology, and is traditionally portrayed as an ethereal maiden or a woman who is emaciated and rotten on one side of her body and face. Marvel comics reinterpreted her as a more conventional supervillain, forever trying to trick or capture her fellow Asgardians into giving up their souls to her realm. She was previously voiced by Janyse Jaud in the animated feature Hulk vs. Thor. I would be very surprised if neither Thor nor Bruce Banner end up dead at some point in this film and need rescuing from her. It's cool to be getting a proper female supervillain (we had Nebula in GotG, but she was more of a henchwoman).

Tessa Thompson is something of a rising star, having been mostly famous for appearing in Veronica Mars in her younger days but now receiving acclaim for roles in For Colored Girls, Selma, Copper, Dear White People and the recent hit Creed. She takes on what could be a pretty major role in Ragnarok as Valkyrie. There have been a few Valkyries in Marvel comics, but this is Brunnhilde, the leader of the Valkior, the female warriors of Asgard. As well as being incredibly strong like all Asgardians, Valkyrie is one of the greatest warriors in the cosmos and can sense the approach of death on others. Her fighting skills are matched only by Sif and Thor himself. She's been voiced on TV by Colleen O'Shaughnessy and Michelle Trachtenburg, and is also briefly part of Hulk vs. Thor voiced by Nicole Oliver.

Jessica Henwick is an English actress, best known for playing Nymeria in Game of Thrones, and who also appeared as Jess Pava in Star Wars: The Force Awakens. These are just the latest credits in a busy seven years on screen. Henwick is of Singaporean-Chinese-African descent, but Colleen Wing is Japanese, a master of samurai fighting. As well as being an ally and sometime lover of Danny Rand, the Iron Fist, she's been associated with Luke Cage. Her longest lasting and most significant partnership is with Misty Knight (below), with whom she formed the Daughters of the Dragon, which was optioned for TV adaptation years ago, but which never got out of development hell. She's had a hell of a rough time of it over the years, so don't expect her to have an easy life on screen.

Simone Missick is a new name to me. She's been acting since 2003, but this is her first major role in a series from the looks of it. Misty Knight is an especially awesome character, a product of the same overblown blaxpolitation trend that created her comrade Luke Cage. Over the years she's developed into a formidable hero. Originally a cop, she lost her arm in a bomb attack, and later received a bionic replacement from Tony Stark. As well as a long-time partner of Colleen Wing, she's been part of the Heroes for Hire and the Fearless Defenders, and affiliated her prodigious martial arts skills with the Iron Fist. (Who headed the Fearless Defenders with her? Valkyrie!) It's highly likely she'll cross over to Iron Fist after debuting on Luke Cage, and I'd expect her to appear on The Defenders in good time.

A fun bit of extra casting for the GotG sequel, set shots from the production have revealed posters for movies starring Simon Williams, who is played by Nathan Fillion, sci-fi giant and all-round good egg. He previously did voice and motion capture for a big blue bloke in the first GotG, but this time we'll actually see his face on screen. It's unlikely there's more to this than background imagery, and I wouldn't expect anything more than a cameo from him. In the comics, Simon Williams is an actor, who also happens to be a part-time superhero called Wonder Man, who basically has Superman's powers and none of the humility. He screws things up quite often, as well.
Posted by Daniel Tessier at 20:25