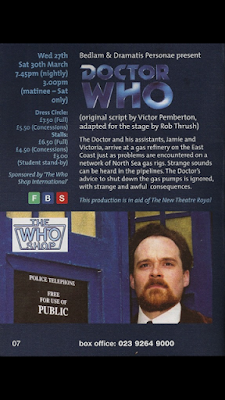 Nick Scovell first played the Doctor in a self-penned stageplay in 1996, titled Planet of Storms. It was this production that brought him to the attention of Rob Thrush, who cast him as the Doctor in his fanfilm The Millennium Trap, still the most popular and well-known production to star Scovell as the Doctor. Thrush joined Scovell's theatre group, and they went on to hold four further Doctor Who stageplays. Each of these was based on a 1960s serial, lost from the archives: The Web of Fear (performed in 2000), Fury from the Deep (2002), Evil of the Daleks (2006) and The Dalek Masterplan (2007).

After this, plans were afoot to adapt The Power of the Daleks for stage, but the BBC declined, in this instance, to provide permission. A mistake, in my view, as the previous plays had been very popular with fans (both old and new, in the case of the more recent plays), and had raised money for the BBC's own charity, Children in Need. Still, we can't expect too much logic from the Beeb, who junked the episodes in the first place, after all. Scovell and Thrush went on to create Power of the Daleks: Reimagined, a fanfilm which was made available via YouTube in 2012, and won great fan acclaim until the Beeb stepped in again and demanded its removal.

However, there has been a recent burst of new enthusiasm for Scovell's Doctor, with a Facebook group being created to celebrate his Doctor's 20th anniversary by providing access to new and archive material. Just before we ushered in the new year, the group released a brief two-hander episode to mark the occasion, "A Moment in Time." Before that, however, we were briefly treated to a recording of a performance of Fury of the Deep, made available for only a few days before being withdrawn. h

Fury From the Deep was performed at Portsmouth Theatre Royal, the same venue that would later play host to both Evil and Masterplan. It was when Evil was being publicised that I first found out about Interalia Theatre's Doctor Who productions, and so while I saw and thoroughly enjoyed both Dalek plays, I never had the chance to see Fury performed. As such, it was a great opportunity to experience this version of the serial. Two things struck me about the production. Firstly was the use of pre-filmed inserts, which were played at the original performance on a screen mounted above the stage. While this may have been a little disjointed to see, it makes it quite an interesting multimedia experience, and when played "full screen" as it were, as part of the video, the inserts work extremely well.  These include some excellent location work, and the recreation of some classic scenes, including the chilling moment when Maggie Harris walks to her seeming doom beneath the waves. They're certainly not unambitious either, bringing in a helicopter for the Doctor and co. to zip about in.


Secondly, within the play itself there is a very clever use of the structure of the theatre itself. With Fury From the Deep involving all manner of plunges to the depths, through pipes and pits, a single level stage was always going to feel rather flat. Instead, Thrush directs the play to make use of the many levels of the theatre itself. The cast begin some scenes in the uppermost levels ("That power would put me up above the gods!) before descending down scaffolding into the heart of the theatre. It's tremendously effective, giving real scale and, well, depth to the production.

Nick Scovell is excellent as the Doctor, giving a performance that is akin to Patrick Troughton's without ever being a pastiche. There's an earnestness to his Doctor, but with a twinkle and occasional bursts of pure glee at the adventure. Victoria Waterfield is a central figure to this story, here played with great sympathy by Laura Ford. (Victoria had previusly been played by Nancy Holloway in The Web of Fear, while Rosie Grant took on the role for Evil of the Daleks - ironically the character's debut story was adapted after her departure.) Jamie is played by John Paul McCrohon, who gives his all as the canny Scotsman and absolutely fits the part.

I also have to sing the praises of the creature operators (one of whom is named Matt Smith, although I presume not that Matt Smith), who bring the weed creatures to life far more effectively than in the original serial. Making an angry bunch of algae into a credible threat isn't easy, but they managed it here, and the cast all play it with absolute conviction. Fury From the Deep is definite classic in the world of Doctor Who fan productions. Planet of Storms is still available to view (being a non-copyrighted script), but the quality of the recording is sadly somewhat poor. Here's hoping some of the other remakes will be made available for a short time in future. They are most certainly deserving of new fans.
Posted by Daniel Tessier at 11:19

Email ThisBlogThis!Share to TwitterShare to FacebookShare to Pinterest
Labels: Doctor Who, Doctor Who Classic, fanfilms