Issue one of the new sci-fi and cult TV magazine Chromakey is due for publication on the 25th of January. It includes "Lost in Space: Everything Old is New Again," my elaborate ramble on the opening episodes of Lost in Space - both the 1960s versions and the new Netflix series. 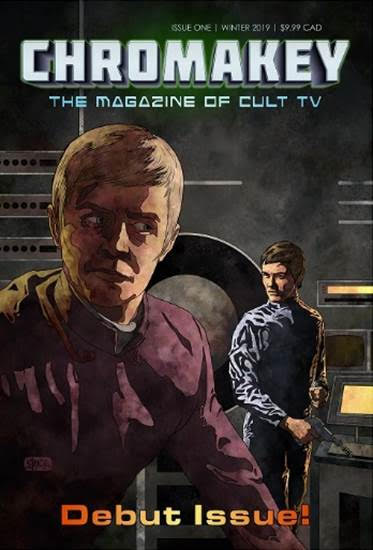 There's a ton of sci-fi goodness in there. The full contents runs:


LOST IN SPACE: EVERYTHING OLD IS NEW AGAIN
Dan Tessier takes a look at the similarities and differences between the 1960s' original and the new Netflix series.

THE CONTEMPORARY FUTURE OF ALTERED CARBON
Richard Peevers dives into the world of the popular Netflix series.

THE STARLOST
Bob Furnell goes back to the 1970s and delves in to the making of this Canadian-made sci-fi series.

GARY CONWAY INTERVIEWED
Actor Gary Conway sits down with Steve Eramo to talk about his career and life in this exclusive interview.

REVISITING A VERY BRITISH COUP
Matthew Kresal gets to grips with this highly popular and well-remembered British political thriller.

TUBE TERRORS: GARGOYLES
Remember those made-for-tv horror movies from the 70s and 80s?
Arnold T. Blumberg takes a look at the 1972 production Gargoyles.

SAPPHIRE & STEEL: LIKE A PIECE OF DARKNESS
Peter Gouldson offers his appreciation of the second adventure which many consider one of the series' best.

Keep an eye out for this, it should be quite something.
Posted by Daniel Tessier at 15:42

Email ThisBlogThis!Share to TwitterShare to FacebookShare to Pinterest
Labels: fanzines, Lost in Space