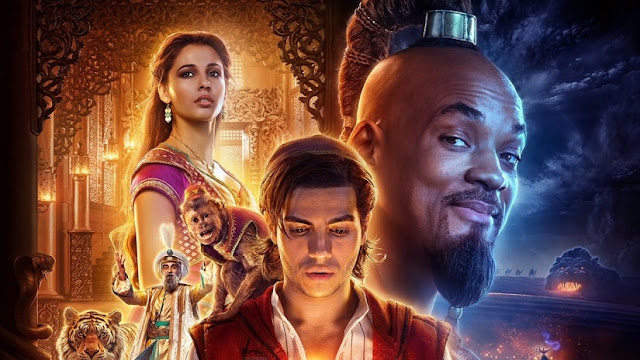 Disney's remake juggernaut continues apace, and while I'm not that bothered by the new versions of Dumbo or The Lion King (supposedly a live action version - they're not actually real animals you know, just fancier cartoons) this was one I didn't want to miss. Aladdin is one of my absolute favourites in the Disney collection, and one that was ripe for a reinvention. From the outset I was intrigued by this one, not least because Guy Ritchie directed it. He's definitely not the sort of director you'd expect to take on a musical fantasy for children, but his version works. It's not on a par with the original (which is to say, the 1992 film, I realise the original story is several centuries old), but it's pretty brilliant.

Naturally, the biggest deal was always going to be the Genie. Robin Williams was the absolute star of the original, and going forward without him was always going to be a challenge. (Not that it's the first time the Genie has been played by someone else; in the straight-to-vid sequel The Return of Jafar and the underrated Aladdin TV series, it was Dan Castallenetta.) Hats off, then, to Will Smith for firstly taking up the daunting challenge, and secondly making such a success of it. He wisely doesn't try to ape Williams's performance, but stated he wanted to pay tribute to it, and he totally pulls it off. Smith's Genie is cooler, surprisingly camp and very much Smith's own. The CGI version of the character almost works, but dips into the uncanny valley where the integration of Smith's face onto the animated form. He's better when he gets to play him in human guise. I love that the Genie gets a new subplot in this version, with his own chance at romance. The object of his affections, Jasmine's handmaiden Dahlia, is a new addition to the story, and in the hands of actor-comedian Nasim Pedrad provides some of the biggest laughs in the film. In fact, I feel the addition of her character is one of the best things about the film, making it a great deal less male-centric and humanising both the Genie and Jasmine.

While the Genie was the big challenge, it was also vital to get the rest of the cast right. Mena Massoud is incredibly likeable as Aladdin. He has an easygoing but awkward charm, and has great chemistry with both Genie and Jasmine, and wow, he's got moves. Marwan Kenzari is a younger, more handsome Jafar than we're used to (although I once knew a girl who had a big thing for the original Jafar). He's still as sinister as hell, judging well when to be softly spoken and when to scream in rage. I love the extra background we have on Jafar's character. He's from the same background as Aladdin, a thieving pauper who's slowly dragged himself up into a position of power, and now refuses to ever settle for being the second most powerful person in the room. It gives him a rationale for his supervillain behaviour, and shows us how easily Aladdin could become corrupt if he makes the wrong choices when he is presented with power.

Naomi Scott is exceptionally good as Princess Jasmine. She gets two solo songs, something the character lacked in the original, and while they're never going to be rattling round my head the way "Prince Ali" does, they're pretty powerful and Scott's voice is incredible. Jasmine gets to have a lot more impact on the plot this time round as well, being far more involved in the climax of the film (and I'm pleased that her cringe-inducing fake seduction of Jafar has been excised). It's also easy to see why men would be falling over themselves to marry her (aside from the obvious consolidation of power aspect). I'm not saying that Naomi Scott is the most beautiful woman in the world, but it's definitely possible.

The animated Aladdin's gender politics were pretty good by 90s Disney standards, but this update gives Jasmine a greater status in the story. Rather than purely trying to find someone she'd be happy to marry, here Jasmine campaigns to have a voice in her kingdom's future, to actually be the ruler of Agrabah rather than merely marry him. We also get more background about her, learning that her mother was from another kingdom and that her death is what has led the Sultan to keep Jasmine confined to the palace. I guess this was vaguely implied in the original, but it's good to have some more depth to the setting - Jafar's intention to conquer Agrabah's neighbours also makes for a more realised world.

There aren't many family blockbusters that feature barely any white faces. It's absolutely right that the cast are predominantly from Arabic backgrounds, although there are also a number of people of other ethnicities (Scott's mother is Ugandan-Indian, Pedrad is Iranian by birth, and Smith of course is African American). While I understand some people being dissatisfied by this, seeing it as Hollywood's generic interchangeable dark skin approach, Agrabah isn't a real place and who's to say exactly what ethnic make-up it would have? Jasmine, especially, is explicitly the daughter of someone from another country. The diversity of the cast is a strong element in its favour, and it's not like the story of Aladdin was ever set in a real version of Arabia (the original story was set in China, albeit a China that was suspiciously Arabian). One oddity is the inclusion of Billy Magnussen as Prince Anders, from some Scandinavian-esque kingdom, and while I understand some people seeing this as whitewashing, he's one character and I saw it more as illustrating how men were willing to travel from all over the world to meet the Princess. Anyway, Aladdin's probably set ten thousand years in the future and can feasibly reflect all sorts of influences.

The pacing is admittedly off, with some scenes dragging a little, but on the whole the film balances story and song effectively. It's astonishingly beautiful, wonderfully colourful, and the song-and-dance numbers are spectacular, almost Bollywood-esque in some cases. There are some tweaks to the lyrics of the classic songs as well, some correctional (changing "Sunday salam" to "Friday salam" because someone finally remembered they were dealing with Muslim characters) others funny ("I hear your princess is hot, where is she?"), and they make the most of Smith's skills as a rapper by tweaking the style of his songs to make them more his own. (Although I'd have guessed we'd see the Genie beatbox, I wasn't expecting it from Jasmine.)

I was pleased to see the original climactic defeat of Jafar was retained, although the final confrontation was extended for greater effect, albeit perhaps a little too long. Absolutely delighted that Frank Welker returned to voice the Cave of Wonders, and uncredited, provided the squeaks and grumbles of Abu and Rajah. Alan Tudyk makes a decent Iago the parrot, although it's a reduced role compared to the original. In spite of heavily following the '92 film, the new Aladdin strikes a balance between recreating the original and being its own thing. A great success in my eyes.
Posted by Daniel Tessier at 17:20