WHO REVIEW: A Little Help from My Friends/Alternating Current (Houser, Ingranata, Angiolini) 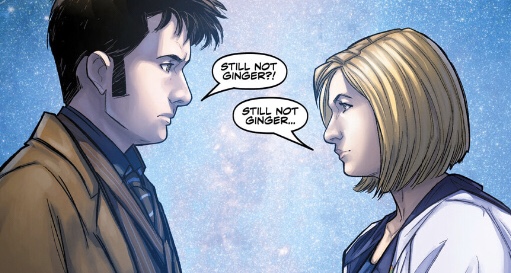 With the new series, Doctor Who: Flux, just a week away, it seemed a good time to review these two lovely trades from Titan Comics. The first goes by the full long-winded title of Doctor Who: A Tale of Two Time Lords - A Little Help from My Friends, and comprised the entire Thirteenth Doctor: Year Two run in the States, published in Doctor Who: Tales from the TARDIS in the UK. This was followed by Alternating Current, the first story in Doctor Who Comic as the series was renamed. This leads directly into Time Lord Victorious: Defender of the Daleks, which was supposed to be published after but ended up being published some months earlier due to various delays. But that's the COVID era for you. These things happen. One oddity that has arisen from the changes is that both these books are labelled as volume one, which is one of those silly little nothings that will annoy me every time I see them on the shelf.

Both stories are written by Jody Houser, illustrated by Roberta Ingranata and coloured by Enrica Eren Angiolini. These ladies are pretty much the DW comics dream team by now, and Houser really has the Thirteenth Doctor down to a tee. In fact, I don't think there's a writer out there who portrays her as well as Houser. Admittedly, we're dealing with comics, which are a totally different skill to TV script or prose writing, but still.

The big draw, though, is that these stories team up the Thirteenth Doctor with the Tenth, bringing back a host of popular characters and monsters while they're at it. It's easy to be cynical about this; recent sales of Doctor Who material have been flagging a little, and Ten remains one of the most popular Doctors ever. It's a transparent attempt to get fans buying material with Thirteen in that ties into the current programme. But so what? This is not a new idea. We also have Doctor Who: Edge of Reality just out, a video game that features both Whittaker and Tennant providing voices for the Doctor. You have to wonder why they don't go the whole hog and have Tennant turn up in the TV series. (That's assuming they haven't done that anyway. We'll know for sure in no more than seven weeks.)

It's fanwank to the highest degree, but if you can't do this sort of thing in the comics, where can you do it? The comics can legitimately use any character from any era in any setting, unbridled by budgetary constraints (excepting certain copyrights) and without having to worry about actors growing old, disinterested, or dead. Plus, Ten and Thirteen work well together. Whittaker's performance is clearly influenced by Tennant's, and they both have that exuberant energy hiding loss and loneliness, but Thirteen lacks the self-absorbed moping of Ten and seems more self-aware (and, as she points out here, is older and wiser).

A Little Help from my Friends is the better of the two, taking advantage of a specific period in Ten's life when he was stranded in one location and then dropping Thirteen and the fam on him. The TARDIS is diverted to London in 1969, when Ten and Martha had been zapped back to by the Weeping Angels in "Blink." Not only do the current team have to try to investigate why they were sent back without accidentally nobbling the Doctor's personal history, they have to contend with a cadre of Angels and, for extra fun, Autons. The pick-and-mix approach to the revived series' monsters makes for a visual party, with the Nestene Consciousness appearing much as it did in "Rose," and of course the Autons and Angels are both very visually-based monsters. They're a good fit for the medium.

The strength of the story is in its character interactions though. The Doctor tracks down Martha while Yaz leads the rest on a mission to keep tabs on Ten. Laying low and keeping things secret doesn't last very long, and while Ten and Thirteen get on pretty well by multiple Doctors' standards, the differences in their outlooks come to the fore. Thirteen, being newly female, much more experienced and with the benefit of hindsight, is baffled by how Ten could have missed how Martha felt about him, and finds herself apologising to her friends and repeatedly cutting Ten off when he's about to go all nostalgic over adventures with Rose.

It's a fun, pacey story, ending on an effective cliffhanger as Thirteen takes her team home by jumping forward to 2020, only to find London in ruins. This leads nicely into Alternating Current, revealing that all that crossing time streams has led to a timeline shift, with humanity being conquered centuries before as a ripple effect on the Doctor's timeline. It's probably too complex an idea to run with very often, but the TV series could play with this idea to great effect. Changing history is a hazard in Doctor Who all the time, but what's rarely considered is the cumulative effect of the Doctor's actions on each other as they constantly cross their own history.

Again, there's a grab-bag approach to continuity on display here, with the divergence occurring in "Nikola Tesla's Night of Terror," which in this version of reality didn't involve the Doctor at all. Result: Tesla was abducted by the Skithra, who built their technological powerbase, accidentally woke up a Sea Devil colony and teamed up with them to conquer the Earth. In this reality, Rose leads a resistance group, with Pete and Jackie Tyler both alive, well and married. The fanwank perhaps goes a bit overboard here, but you know, why not? Having Ten team up with a different version of Rose, one who's never met the Doctor before, offers some interesting interactions, but we're robbed of "our" Rose being reunited with the Doctor in a new incarnation, which would have been fun. Then again, every time we return to Rose on Pete's World it robs a little impact from that story, so perhaps this new version is best. The standout character, though, is a sympathetic Skithra Queen who allies with Thirteen to help right the timelines. It's another fun story, not quite the level of the previous one, but it works. It also leaves some interesting scope for future stories to follow up some of the characters and ends with a great hook for the next serial.

PLACEMENT: For the Thirteenth Doctor, this must be after Spyfall, since everyone is fully au fait with the idea that she used to be a man. For the Tenth Doctor, the first story takes place during "Blink," but the second story must be sometime later since he has his TARDIS back and is seemingly travelling alone. It apparently leads into Defender of the Daleks which is part of the Time Lord Victorious arc, so the best place is probably between "The Waters of Mars" and The End of Time.