REVIEW: Doctor Strange in The Multiverse of Madness 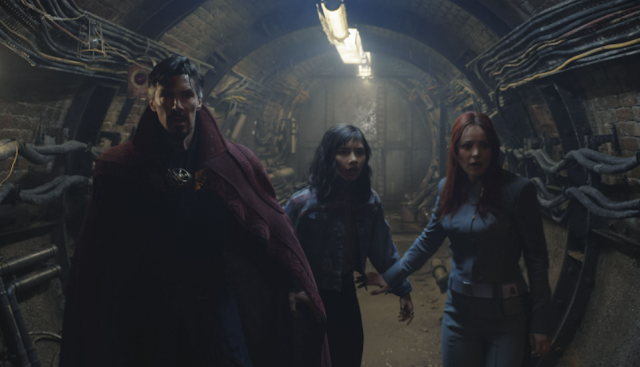 This is a film that's difficult for me to review from an objective standpoint. More than any Marvel film so far, Multiverse of Madness is made for fans, revelling in the lore of both comics and screen and continuing multiple storylines from various properties. What it would play like for a casual viewer is hard for me to imagine.

Some have complained that you have to watch dozens of previous films and series before sitting down to Multiverse of Madness, but really, the only things you have to have seen beforehand to grasp the important beats are the first Doctor Strange, Avengers: Infinity War and Endgame, and the Disney Plus series WandaVision. You'll get more from it if you've seen the bulk of the Marvel Cinematic Universe, more still if you've watched other companies' Marvel films, particularly Fox's X-Men series, and yet more if you've read the comics and seen the cartoons. It's been this way from the beginning. You can watch these films and understand them without knowing everything behind them, but there are more things to enjoy if you do have the knowledge.

That said, this film is a bit of a mess. Still, it's an entertaining mess, and that's perfectly acceptable for a comicbook movie. They don't all have to be great works of drama. There's certainly no opportunity to get bored, jumping from scene to scene, reality to reality, set piece to set piece with barely a chance to draw breath between them. It jumps straight into the action with virtually no preamble, fair belting along. The overall concoction, though, is so frenetic that it threatens to become overwhelming, with very few scenes allowing enough time to really be affecting beyond the, genuinely gorgeous, visual effects.

Which is a pity, because there are some fine performances here. Benedict Cumberbatch has perfected his Doctor Strange, portraying a version of the character who has finally learned some humility, so that he is contrasted against two of his alternative selves who have failed to do so. Xochitl Gomez is wonderful as the young America Chavez, taking one of the best modern Marvel characters and bringing her to life, both a very vulnerable child and a believably powerful being. Benedict Wong continues to be almost too good for these films, imbuing his world-weary but good-humoured namesake with real class.

Perhaps wasted, though, is Elizabeth Olsen. Not that she isn't good in this – her portrayal of Wanda, wracked with grief and broken beyond rational limits is both upsetting and terrifying. However, after her truly exceptional performance in WandaVision, her character here is a disservice. WandaVision dealt with grief, depression and love with real feeling, intelligence and care, and still had plenty of room for dazzling spectacle. To see Wanda come through that, when she seemed to be finally healing, and have her not fall back so much as collapse into a villainous caricature is frustrating.

The trailers for the film, which both showed too much and hid a great deal, implied that Wanda would be recruited by Strange and only slowly lose her way. Instead, the film is straight in there, revealing that she's behind the hoard of demons trying to capture America almost right off the bat. While I appreciate there was no attempt to pretend Wanda was the goodie while secretly being evil all along, there's precious little effort to give her character development until the very end, when she, as so many charismatic villains do in film and TV, switches straight from unstoppable, world-crushing evil to regretful self-sacrifice.

I doubt we've seen the last of Olsen as Wanda, be it as the Scarlet Witch, a reformed Avenger or another variant, but it's still a story in which a complex character is relegated to outright villainy and then has to pay with her life, while Strange, singled out as the single most dangerous individual in multiple realities, is forgiven his mistakes and hypocrisy again and again.

Yet it's hard to get too upset by this, given the sheer, unadulterated spectacle of this film. Sam Raimi squares the circle of his directorial career, combining the flair for superheroics that he displayed when he changed the face of comicbook movies with Spider-Man, with the over-the-top horror shenanigans of his origins. There's more than a little Evil Dead in this – there are more than a few visual nods to Raimi's classics, not merely the obligatory Bruce Campbell cameo – and it's a remarkably horrific movie. Indeed, it makes me realise that I must get round to rewatching Darkman, Raimi's previous superhero/horror mash-up, in some ways the movie Multiverse of Madness most recalls, with its terrifying and unstoppable central figure.

Raimi's never shied away from bizarre, mind-bending visuals, be it through camera work or effects, but never before has he had the budget and technology to call on that he has here. Given that, and a character who can literally punch her way through the walls between universes, it's no surprise that this film is as trippy as hell. Still, while it offers to chance to view worlds beyond our imaginings, the comicbook fans are really dying to see the rest of the multiverse's versions of their favourite characters.

The result is more The CW's Crisis on Infinite Earths than Spider-Man: No Way Home. We don't get the no-holds-barred, everything-but-the-kitchen-sink approach that the rumours (and fake trailers) suggested, but there's plenty here. Aside from throwing in old Shuma-Gorath (sorry, we can't call the octopus thing that for some obscure legal reason), the big treat for true believers is the Illuminati, Earth-838's secret council. Patrick Stewart's (likely final) appearance as Professor X was, by now, widely known, but making him, by use of costume, musical cues and visual effects, seemingly the version from the nineties animated series was a cheeky little nod for exactly my generation of fans.

Chiwetel Ejiofor was brilliant as Baron Mordo in the first Doctor Strange but just wasn't used enough, so it's great to have a version of him here, an actor who exudes class in his every appearance. More surprising were the other members of the board. Seeing Hayley Atwell bring her What If? character Captain Carter to the live action MCU is a real treat, and making Lashana Lynch's Maria Rambeau this world's Captain Marvel is a nice touch. Most briefly, and most unexpectedly, was Anson Mount reprising his role as Black Bolt, the only MCU series I have never seen, and I'm sure I'm not alone there. He has some real gravitas though, even as he sits there in silence, and as an aside, we get Captain Picard and Captain Pike sitting on the same council.

Perhaps most notably, we have the first appearance in the MCU of Reed Richards, aka Mr. Fantastic, played by fan-favourite choice Jon Krasinski. This doesn't necessarily mean he'll play Reed when he turns up in the mainstream reality of the MCU in the upcoming Fantastic Four reboot, but if he does, it'll be no bad thing. The inhabitant of this world who stands out most for me, though, is Rachel McAdams, who at first seems relegated to merely play “the one who got away,” but then reappears as a Christine Palmer who can hold her own in the reality-warping world of Strange. As with Ejiofor, McAdams shows that she just wasn't done justice in Doctor Strange.

While it's a frustrating, disjointed film, Multiverse of Madness gets by on sheer verve and spectacle. Don't think too hard about the consequences of the story and you're sure of a good time, but it may not be as satisfying for those not steeped in this stuff.