Obverse Books, publishers of far-fetched fiction, have announced their lineup for this year's Obverse Quarterly series. There's a Faction Paradox linked volume called Tales of the City, set within the City of the Saved; The Casebook of the Manleigh Halt Irregulars, another of Paul Magrs's peculiar creations, and finally the crime collection The Obverse Book of Detectives. But before all that comes the latest Iris Wildthyme collection, Lady Stardust, in which the mistress of the magical bus engages in adventures inspired by David Bowie songs.

I absolutley love this idea, and as a fan of both Bowie and Iris I think they're made for each other. What a bizarre universe they could create together. I only wish I could have written for it myself - still, I'll hold onto my old idea of Doctor Who stories inspired by Divine Comedy songs.

In the run-up to the book's release, Obverse have released this fantastic cover image, created by the great Paul Hanley. It's chocablock with Bowie references, and Obverse have created a competition for fans. Just email bowie@obversebooks.co.uk listing as many references as you can spot - no matter how contrived or obscure. The entrant who spots the most wins a copy of the book. I've already sent mine off - it's a good excuse to start listening to the old Bowie tracks again. 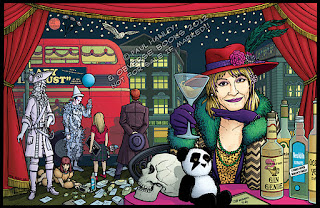