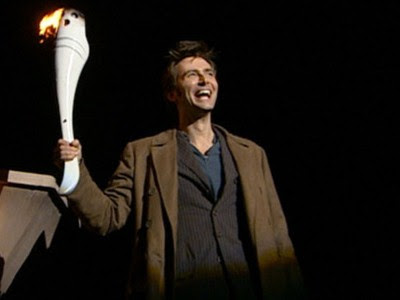 There was, however, a significant anomaly during the beginnings of the events. I'm not alone in having noticed this of course. We all saw the tenth Doctor, David Tennant, light the Olympic flame back in 2006. Now that we've finally reached 2012, there was no sign of him. A severe continuity error, and one that has prevented my enjoying the full experience. To be honest, I wasn't to bothered about the Olympic opening ceremony. People were raving about it, but I'm content to pick out the odd interesting bit on YouTube or wherever. And they cut the Doctor Who bit anyway.

So, back to the important things. Doctor Who news is trickling through, and we could be watching the new series by the end of the month. Lots of people are excited at the news that occasional Doctor Richard E. Grant is to appear in the Christmas special, although in my household there's more interest at the news that Tom Ward, aka "gorgeous Harry" from Silent Witness, is to co-star. Another announcement, hardly surprising but very welcome, is that there will be a special 50th anniversary programme dramatising the origins of the series back in 1963. No word on who will be playing William Hartnell, Bunny Webber, Verity Lambert and the rest, but Mark Gatiss is set to script it. Should be interesting. 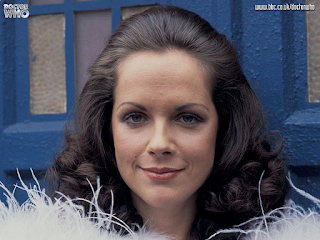 Sadly, we continue to lose people from the great Doctor Who family. Both Mary Tamm and Geoffrey Hughes were taken from us in July. Tamm, of course, was the first face of Romana, the beautiful, icy Time Lady that accompanied the Doctor in the show's sixteenth season. She was a familiar, if occasional face on British TV, and had recorded a full series of Doctor Who audio adventures for Big Finish shortly before she died - something for her fans to look forward to. The Lord Lieutenant Geoffrey Hughes, however, is better known fans of Corry, The Royle Family and Keeping Up Appearances (his character, Onslow, was easily the best thing in that tired old sitcom). He really was a marvellous actor, and has an unusual place in the Doctor Who canon: he played Mr. Popplewick in The Trial of a Time Lord, who was actually a disguised Valeyard, who was actually the evil future incarnation of the Doctor. So, Hughes was, in a roundabout way, one of the roster of Doctors. 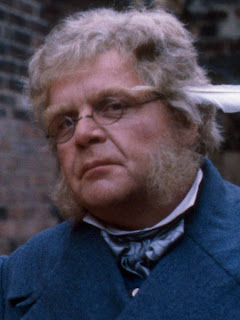 One a more high-brow note, it's all a-go in the world of science. A new species of hominid has been identified in east Africa, while the mapping of several African peoples' genomes has identified a previously unknown genetic sequence. It appears that there was another human species (depending on your definition of human, always a shaky concept) around in southern Africa many thousands of years ago that interbred with the local population of Homo sapiens, much as Neanderthals are thought to have interbred with ancient Europeans. It's all fascinating stuff, hinting at far more complex evolutionary relationships with our closest kin than we previously thought.

Meanwhile, H. sap continues to make great strides into the wider universe. NASA's robotic probe Curiosity has made a successful landing on Mars, and is set to be vapourising rocks in the quest for traces of life for two years at least - perhaps even as much as ten or twenty, if the mechanisms can last as long as the power cells. There's quite a collection of spacecraft around Mars now, so much so that one of them could film the descent of the probe to the Gale Crater on the Martian surface. After some hairy moments and some truly embarrassing cock-ups, the Martian missions have really come up trumps. However, as this image from the BBC shows, the missions are clustering along a relatively small area of Mars. Am I the only once who wonders if there's a bunch of Martians hiding on the other side of the planet? They're probably not little green men, big green reptiles or terrible molluscs in flying saucers though.

Talking of molluscs - Haywards Heath, the rather inconsequential little town where I live, has been overrun by gastopods. Slugs and snails line the pathways, climb the doors and windows, put into hiding by the occasional burst of intense sunshine before reemerging, triumphant, into the humid warmth of the early evening. How long before they rise up and take control? 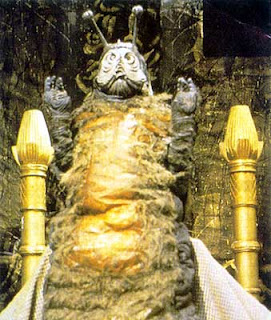 Where's Colin Baker when you need him?

Email ThisBlogThis!Share to TwitterShare to FacebookShare to Pinterest
Labels: Doctor Who, legends, paleontology, science and astronomy