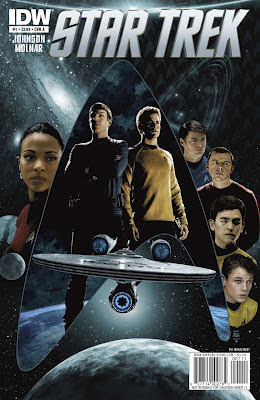 IDW have been publishing Star Trek comics for a few years now, but lately they’ve made a real push towards the sort of titles that really make Trekkies sit up and notice. Not only are they playing fast and loose with their licences and giving us various crossovers, but they’ve been given the rights to the new ongoing run set in the universe of the new movies - the ‘Abramsverse,’ as many are calling it.

Set between the events of the 2009 film and its upcoming sequel, this series has had some input by the creative powers behind the movies, so it could be an interesting look into the way the movies may progress. Readers’ enjoyment of this series will depend on how much they can enjoy what is, for the most part, repackaging of familiar stories, since most, but not all, of the storylines are reimaginings of classic series episodes. For the most part, this has worked very well; the new timeline has established a different enough set of parameters to allow things to shift in some unexpected directions. Alternatively, this could be seen as a chance for a new creative team to do their own versions of favourite episodes, showing how they should have been done. It’s a good way to update the series, and also a good way to piss off the purists. The continuity-geek in me struggles to accept the same events occurring fifteen, sixteen years earlier than in the primary timeline, but that’s my own mental aberration.

The series begins with an adaptation of ‘Where No Man Has Gone Before,’ which plays out much the same as in the original timeline. It’s harder to accept Gary Mitchell as Kirk’s best mate from the Academy in this timeline, since we saw nothing of him in the movie, and the strip hasn’t really the scope to establish a believable relationship. Other than that, it runs along nicely, providing a good, action-packed opener, and there are some fun differences to the original; Bones’s presence gives them a cheeky explanation for the lack of Dr. Dehner, while Spock takes a more active role in the resolution. It’s not a patch on the original, but the possessed Mitchell is creepy as hell.

Following this is an adaptation of the excellent episode ‘The Galileo Seven,’ and it lives up to its predecessor by giving us a Kirk with the guts and the intelligence to run rings around the jobsworth Federation High Commissioner, much less ridiculous alien apemen than in the original, and an especially interesting take on Spock’s emotional development. In the aftermath of Vulcan’s destruction and his breakdown on the bridge, this version of Spock is more emotionally closed than ever, as if trying to rein his human side in completely. Opposing that is the movie’s wild card of his relationship with Uhura, which veers this story on a new course and sets the stage for interesting things to come.

‘Operation: Annihilate’ takes one of Trek’s hokier episodes and updates it well, by focussing on a missed opportunity from the original version: Kirk’s older brother, Sam. Surviving in this version of events, instead of dying as in the original, he provides some good personal conflict with the Captain. Otherwise, this plays along pretty much as expected, although the concern for Spock’s emotional welfare makes more sense of his foolhardy experimentation on himself.

‘Vulcan’s Vengeance’ rounds of Volume Two of the trades, and so it’s as far as I’ve got. The first wholly original story of the series, it has some elements of ’Balance of Terror’ and acts as a true sequel to the 2009 movie, but stands up well as a story in its own right. Beginning with some Vulcan’s meeting in a remote bar in the Delta Quadrant (either the Federation’s much more widespread in this universe, or that’s a cock-up), it takes in a conspiracy to avenge Vulcan’s destruction on the Romulan Empire, ties up the loose end of the red matter technology, and introduces some cool new Birds-of-Prey. It sequalises the movie well, provides a strong, fast-paced story, and both forwards the politics of the new timeline and Spock’s family affairs. Mike Johnson’s strong writing, combined with some fine, if unremarkable, artwork from Stephen Molnar, Joe Phillips and Joe Corroney, get this ongoing series off to a good start, and I look forward to see where it goes from here. 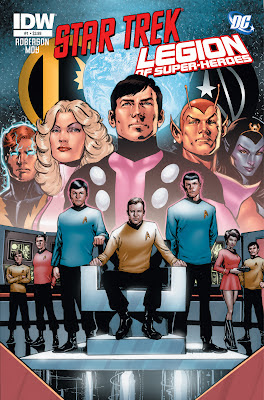 Onto the crossovers. Star Trek/Legion of Superheroes is perhaps not the most obvious pairing in the world, but they actually fit together rather nicely. I’m not especially familiar with DC’s extraterrestrial super-squad, but they do fit well into the colourful universe of the original Star Trek. It’s all colourful fun, but the storyline lets it down. Not only do I feel that there should have been more introduction for fans of either franchise who are unfamiliar with the other, the basic setup seems poorly thought through. With the 23rd century of Star Trek and the 31st century of the DC universe meeting and combining into a new, totalitarian future, it’s all a bit overcooked. There’s too much effort put into throwing references to both series in and not enough on telling a coherent story. There are some cute, throwaway panels - Organians meeting with Oans, Borg fleets absorbing planets, Klingons fighting Khunds - and the room full of recognisable time machines is a laugh. However, the revelation of the villain’s identity will either amuse of annoy. Let’s just say, two characters have been unexpectedly combined, and while there’s a certain logic to it, it’s all a bit baffling. Then they drag another character into it, this time from TNG, and it all falls apart. Add some clunky dialogue and a perfunctory ending, and you get something of a misfire.

The real big news in the TV tie-in circles is the Doctor Who/Star Trek crossover, Assimilation2. Well, it had to happen eventually. We’re onto issue three now, and I’m excited enough to actually be buying this one as it’s released. This might be a mistake; the two writers Tipton have taken the commendable approach of a slow-burning narrative, but this does mean there’s little incident per issue. Issue one introduces the Doctor, along with Amy and Rory, while issue two introduces the crew of the Enterprise-D. It’s a good approach, allowing fans of either franchise the chance to get to know the other, although Trekkies must have been getting impatient by the time of the very brief reveal of Riker and co. at the end of part one. Both groups of characters are brought in mid-adventure, and the eventual meeting is a beaut - there’s an original use of the holodeck, for once. The storyline itself is, so far, simple: a combined Borg-Cyberman force is invading Federation space, starting with Delta IV (oddly home to a number of Starfleet officer; I though non -Deltans got the uncontrollable horn there?) a Borg-Cyberman alliance makes sense, considering that both sides would presumably agree to interface, rather than one having to assimilate the other. Indeed, part three shows us a Borgified CyberController, a happy union of both technologies. 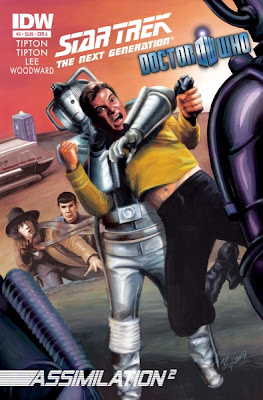 The mystery of the Doctor’s presence in the wrong reality is still unfolding, but the real mystery is the choice of the TNG crew as his comrades. Wouldn’t the current movie crew have been more relevant? Perhaps the licence didn’t allow it, but the Doctor does make the Enterprise-D crew seem rather dull in comparison. Issue three livens things up with a flashback to the original series, nicely realised by hiring in a different artist for the sequence. The fourth Doctor comes across like an unstoppable force of nature in the Trek universe, but Kirk, Bones and McCoy still seem a better match for Doctor Who than the TNG crew. And, be honest, you’ve always wanted to see Kirk bosh a Cyberman. Still, things are hotting up, and I must say that I’m enjoying it all immensely. It helps that the artwork, beautifully painted by J.K. Woodward, is a treat on the eyes, save the occasional panel that’s clearly from photo reference. I’m looking forward to issue four, and also to whatever else IDW have planned for the Trek universe.
Posted by Daniel Tessier at 00:31