My books of the year

Once, I stormed through books. I could get through a biggish novel a week, or a couple of slimmer volumes. I'd pick up old favourites between the new ones, and get through them on semi-auto in a day or two. These days, I've slowed down, partly because I have less free time, but more, I suspect, because I use my free time differently. Still, I've managed thirty-ish this year, which I think is reasonably good going, especially considering my habit to put a book down half-read and get distracted by another. I've been reading 'proper' books, as well as downloading them to the Kindle app on my phone. These are some of the books I've enjoyed most this year; some are new, some are older ones I've discovered.

Rivers of London and Moon Over Soho by Ben Aaronovitch (both 2011)
I love Aaronovitch's Doctor Who work from the late 80s and early 90s, but he disappeared from the Land of Fiction for a while. In recent years he has returned, and made a big splash with his Peter Grant novels. I read the first at the beginning of the year, and the second just a few weeks ago. They're tremendously enjoyable, urban fantasy that doesn't take itself too seriously, with a genuinely original approach to the science of magic. Easy reading, some people turn their noses up at them, but I find them some of the best fantasy of recent years. Book three, Whispers Underground, sits on my bookshelf in wait, and book four is said to be on the way.

Yesterday's Son by A. C. Crispin (1988)
I've read a few Trek novels this year. Most have been fairly forgettable, particularly the modern ones, and a couple I didn't finish. I enjoyed Christopher Bennett's second DTI book, Forgotten History, a great deal, but my favourite of the year has been this slim novel from the days when the original series ruled supreme and Picard was just getting started. It's a famous adventure concerning Spock's son, plucked from the distant past on a world were Spock once had a saucy encounter (check out the episode All Our Yesterdays). I couldn't help but imagine Zar as being played by Zachary Quinto.

The Long Earth by Terry Pratchett and Stephen Baxter (2012)
It's been a good year for Pratchett. Two novels published (haven't read Dodger yet - sorry Tel), a collection of his short fiction, A Blink of the Screen, showing how he started out, and news of an upcoming TV series featuring the City Watch. Sadly, his health continues to deteriorate, so we must appreciate his work while we can. It's also been a good year for Baxter, with a Doctor Who novel, The Wheel of Ice, kicking the past Doctor range into gear again, and the Stone Spring trilogy coming to a close. My favourite for them both, though, has been their first collaboration, the reality-hopping adventure The Long Earth. It's an easily readable adventure that combines their strengths to produce something thought-provoking, funny, and expansive.

City by Clifford D. Simak (1952)
The edition I have is actually from 1980, and the stories within were first published between 1944 and 1951. This is bare bones, solid science fiction, very much of its time and very American in its outlook. It paints an intriguing picture of a world under the control of dogs, in which humanity is extinct. The dogs recount myths of Mankind, who cannot possibly ever have existed, while their robots tend to them as nature intended. It's a fascinating look at how humanity is reshaping the world, and how this will have consequence beyond even our own time on this planet. Brimming with imagination, it takes in extradimensional realms, hyper-evolved ants, psychic mutants and the ethics of changing ones body in order to live on Jupiter.

Wildthyme Beyond by Paul Magrs (2012)
The second book in Magrs's new Iris Wildthyme series, picking up where Enter Wildthyme left off. I enjoyed book one, but this feels more like a proper Iris adventure to me, exploring the very nature of myth, fiction, fandom and reality. There's a rollicking account of Iris's ever-changing origins, one that finally feels definitive, and a worlds-shaking quest through the wilds of Hyspero, one of my favourite fantasy worlds. It is, of course, very silly, and quite right too. Iris fans should also check out Obverse Books' second quarterly of the year, Lady Stardust, which mashes the Mistress of the Magical Bus with the songs of David Bowie.

Dark Horizons by J. T. Colgan (2012)
It's been a good year for Doctor Who novels. The publication schedule has been massively scaled back, but this has led to the novels becoming events. We've had Gareth Roberts's noveliation of Shada, and the aforementioned Baxter novel, but it was Jenny Colgan's eleventh Doctor novel that was the surprise hit for me this year. Full review here.

The Monsters of Templeton by Lauren Groff (2008) 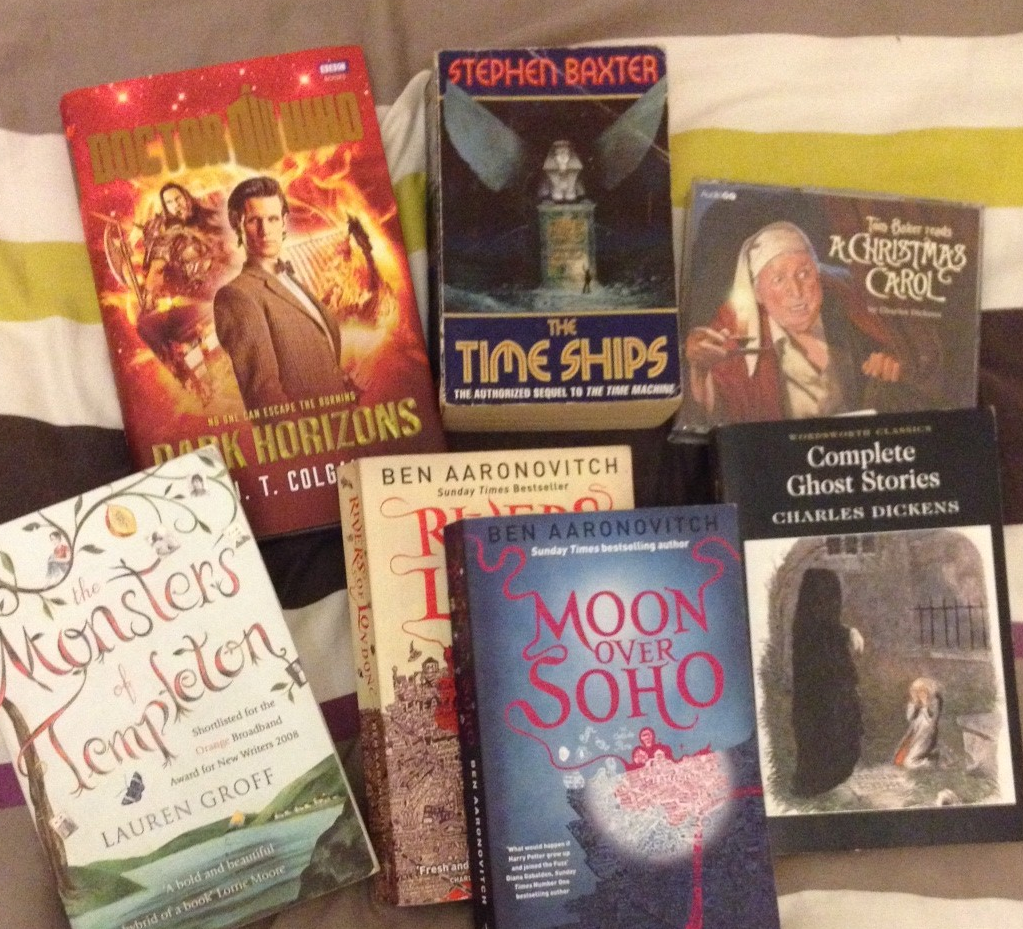 This became my book for reading at work. Sometimes I like something that's all plot, easy to get through quickly. Othertimes, it's better to relax with something light of incident, and to just enjoy the beauty of the prose. Templeton is one of the latter. Groff grew up in Cooperstown, New York, and created Templeton as a fictionalised version of her home. Student Willie Upton returns home, pregnant by her professor, and is drawn into the legendary history, and historical legends, of her family and town, as she tries to discover the identity of her own father. Oh, and there's a monster in the lake, who has just died and sent the town into a sort of bemused mourning. Evocative of a feeling of truly belonging to a place, for good or ill, this mixes humour, romance and tragedy with just a hint of fantasy. Gorgeous.

Thirteen by Sebastian Beaumont (2008)
Another fantasy-tinged urban novel, although this one is set in Brighton, my home city (near as dammit). A semi-autobiographical novel, this told me more than I ever wanted to know about the everyday (or rather, every night) life of a cab driver. All but one of the peculiar cab-related incidents in this story genuinely happened to the author, or so it says. As the story develops, things move from being merely odd to otherwordly, and the protagonist's mental health erodes as the barrier between his life and his own subconscious break down. A downright odd book, and often a very funny one, it ends up as a haunting ghost story.

The Time Ships by Stephen Baxter (1995)
This was my first encounter with Baxter, the master of cosmic fiction. I read it not long after release, so I would have been eleven, maybe twelve. I picked up another copy this year, and remembered why I had adored it. The official sequel to the seminal The Time Machine by H. G. Wells, The Time Ships spans vast reaches of time, forwards, backwards and sideways, grappling with mind-warping ideas while always remaining readable, accessible and fun. I also read another sequel to Wells's classic, K. W. Jeter's 1979 proto-steampunk novel Morlock Night, recently republished. The title is easily the best part of this book. Stick with Wells and Baxter.

The Complete Ghost Stories of Charles Dickens (Wordsworth edition, 1997)
Some spooky winter reading. Every year I read A Christmas Carol, although this year I have instead opted to listen to Tom Baker read it. However, that is only the most famous of the Dickens ghost stories. I haven't read enough Dickens, but this volume collects extracts from his great novels and short stories alike. I picked it up in a cafe-bar-bookshop in Skopje, for staying in when the snow and ice became too much.