WHO REVIEW: 7-X. The Snowmen

Victoriana makes Christmas feel more Christmassy, and Doctor Who more like Doctor Who. Following two mini-episodes to whet our appetites, finally the hour-long special arrives. It’s been months for us, but seemingly longer for the Doctor, who’s been sulking in the cloud layer since he lost Amy and Rory. The Snowmen presents the Doctor, and the series, with a fresh start. The show feels revitalised, with a new look, a new companion, and a new supporting cast.

In spite of the ongoing mystery that is Clara, The Snowmen is a fairly straightforward episode, and there’s nothing wrong with that. A fun, uncomplicated adventure, beautifully realised. Both of Smith and Moffat’s previous Christmas outings have embraced the fairytale ethos of their era more than the regular episodes, and this story continues in that vein. Although there are scientific trappings, this episode is an out-and-out fantasy. The Doctor lives in his TARDIS on top of a cloud, accessed by a ladder and hidden behind a wall of invisibility. It’s a beautiful image, emphasising the “anything’s possible” feel of the current series. Equally, the Snowmen themselves are visually stunning, fairytale monsters as creepy as hell (my poor sister really didn’t like those shark-toothed grins, and she’s twenty-four). As a threat, they’re fairly poor, as even the Doctor points out. They’re useless in the summer and can be defeated by thinking really hard, but they look great.

In fact, that’s something of a problem with the episode as a whole. Both the Doctor and the villains are on poor form here. Richard E. Grant is perfect as Dr. Simeon, putting in a surprisingly understated performance that is quite wonderfully sinister, while Sir Ian McKellen provides the ideal voice for the Great Intelligence. Who else guessed the villain’s identity? Really, for a fan, it was quite obvious, but the revelation that this was the Intelligence’s birth was unexpected. However, this mighty being is reduced to little more than a ghost, having been defeated by the power of a good cry. As a fairytale ending it works beautifully, but it makes the villains seem feeble and the Doctor little more than a bystander. 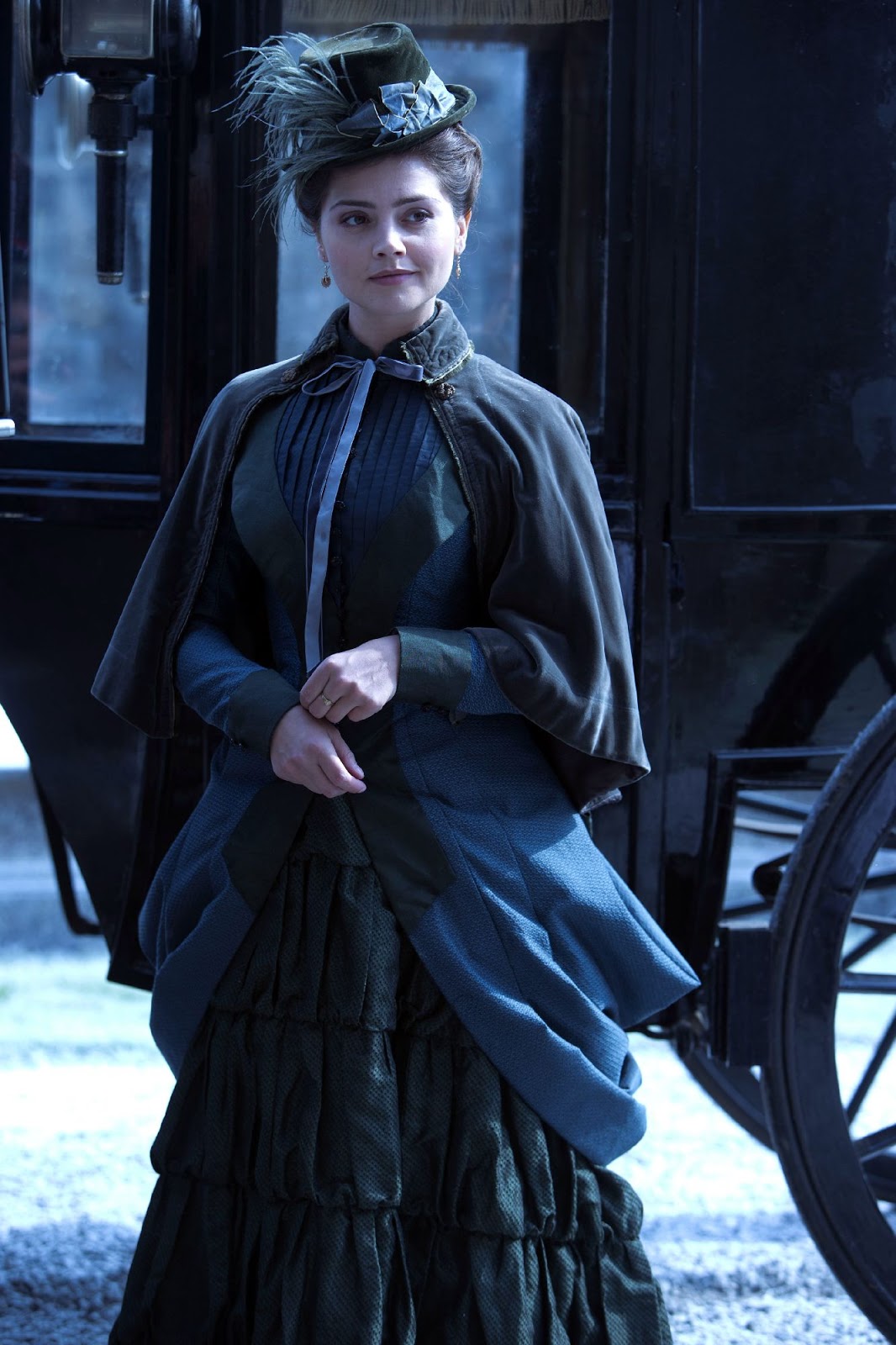 Indeed, the Doctor isn’t up to much in this episode. Thankfully, Matt Smith is excellent, as usual, and makes the Doctor seem far more impressive than he actually is. He excels at this quieter take on the character, while still being able to leap into the more manic, over-the-top style we’re more familiar with (the Sherlock Holmes moment in particular). However, if the Doctor is ineffectual, then this is just what is required by the story. This episode is about how the Doctor brings the best out in Clara, and how she reinvigorates him in return. To turn the Doctor around would require someone pretty damned special; happily, Jenna-Louise Coleman is more than up to the task. Her Clara is not just a (very) pretty face, but is fun, intelligent, creative and hugely confident. She’s a sparkling personality, but in the hands of a lesser actress could easily have become insufferable. Coleman makes Clara a character we’re desperate to get to know better, and it’s easy to see why the Doctor is too.

Coleman and Smith (sounds like a law firm) dominate proceedings so much, it’s hard for anyone else to make much of an impression. As noted, Grant and McKellen are both excellent in their roles, but feel very underused for such A-list names. Tom Ward barely gets chance to make an impression as Captain Latimer, although brother and sister actors Joseph and Elle Darcy-Alden are very impressive as his children. The Great Detective and her sidekicks get more screentime than in their debut, but even so, are in desperate need of a dedicated episode to explore them fully. Strax gets the bulk of their material, and supplies almost all of the genuinely laugh-out-loud comedy material, but Jenny and Vastra, both potentially fascinating characters, deserve a great deal more focus. 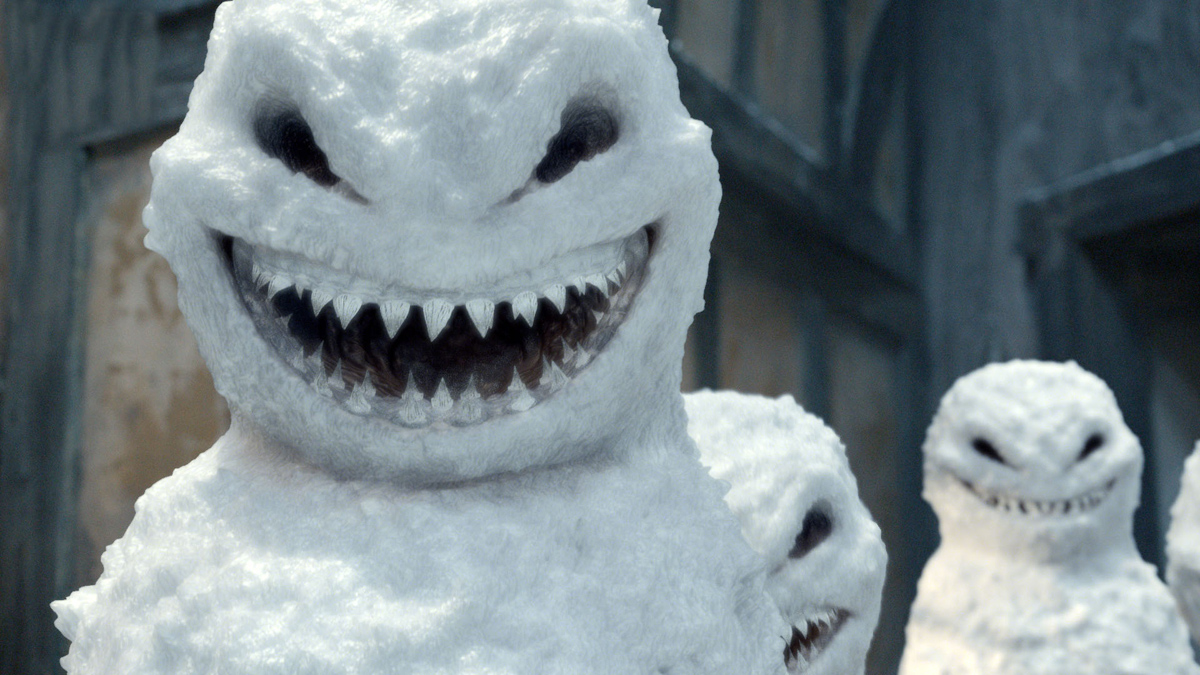 It would also be wise to turn a blind eye to the plot, which works on broad strokes but holds little water under scrutiny. Some apparent problems are possibly deliberate; if the Doctor wants to be left alone, why go to where three of his friends are living and give them his phone number, unless of course he subconsciously wants to be pulled out of his stupor. The one-word-test is utterly daft, and it’s a huge stroke of luck that Clara’s problem involved a pond and so tweaked the Doctor’s interest, but it provides a gorgeous scene and so can be forgiven. However, when the surprisingly shonky CGI ice-governess stalks the heroes, the characters’ oversights take the biscuits. Yes, the first visit to the TARDIS is always a major moment, but we were all shouting “Close the fucking door!” at the screen. One stupid oversight leads to Clara’s death, and while this was all necessary to move the plot forward, it could have been handled better.

All in all, though, The Snowmen is hugely enjoyable, and apart from the door debacle, any quibbles arose only after rewatching and over-analysing. This is a rich serving of Victorian whimsy, opening the door for new adventures for the Doctor and Clara and promising a new mystery to drive the series forward. Here’s to Series 7, Part 2, or whatever we’re calling it. Merry Christmas!

New looks: The Doctor now dresses in the Victorian style, as befits a man living in 1898; however, it looks like he’ll be sticking with the frock-coated look for the upcoming run. The purplish frock velevet frock coat and waistcoat give the elegance of the third or eighth Doctor, while the checked trousers and battered hat evoke the second (Troughton’s birdwatcher’s hat had a very similar silhouette to Smith’s Artful Dodger-styled topper). The bowtie returns when the Doctor gets his mojo back – before that, he wears a cravat, for the first time in a long while.
The TARDIS is looking pretty battered on the outside, but the interior has enjoyed a fantastic revamp. It’s perhaps less interesting than the Heath Robinson-styled madness of the previous design, but I find it far more effective, harkening back to the Brachacki’s hi-tec design for the original console room. Also, we get a revamped title sequence with both a spookier remix of the them tune, and a glimpse of the Doctor’s face for the first time since 1989. 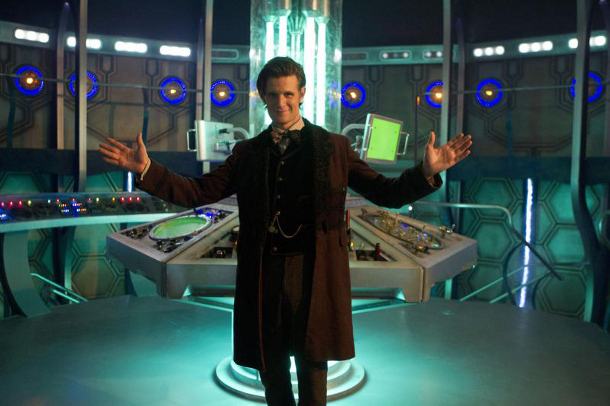 Links: Vastra, Jenny and Strax first appeared in 6.7, A Good Man Goes to War. While the 19th century is Jenny and Vastra’s native era, Strax’s presence is a mystery, especially since he died during his previous appearance. The Doctor says a friend brought him back, and leaves it at that. Sontarans are clones, of course, so it’s not too much of a stretch for him to be recreated.
The Great Intelligence first appeared in 1967’s The Abominable Snowmen and The Web of Fear. Not only does The Snowmen seemingly explain its origins, but also its decisions to invade with robot snowmen and to assault the London Underground. It also appeared in the direct-to-video spin-off Downtime – featuring Kate Lethbridge-Stewart (later met in 7.4, The Power of Three), as well as The New Adventures series and as the big bad in TDWP’s Season 37.

Hanky-Panky in the TARDIS: Jenna-Louise Coleman really is one of the most beautiful women ever to set foot in the TARDIS. However, let’s not overlook the gorgeous Catrin Stewart as sexy ninja lesbian maidservant Jenny. For those who like men, Smith is looking rather dashing in his new get-up, but the most handsome man in the episode is the lovely Tom Ward as Captain Latimer; sadly, I’m not sure I like him in a beard.

Best line:  “Sir, please do not noogie me during combat prep.”
Posted by Daniel Tessier at 11:59