The second episode of the crowd-funded fan series Star Trek Continues is a success, and a definite improvement on the first. With a little more experience behind them, everyone involved has upped their game. Acting, writing and direction have all been tightened up. The nature of the story has been under wraps until its release this at the Dallas ComicCon on February 8th, but the official poster has been released now, which gives away some of the setup. Nonetheless, there will be some spoilers in the following review, naturally. 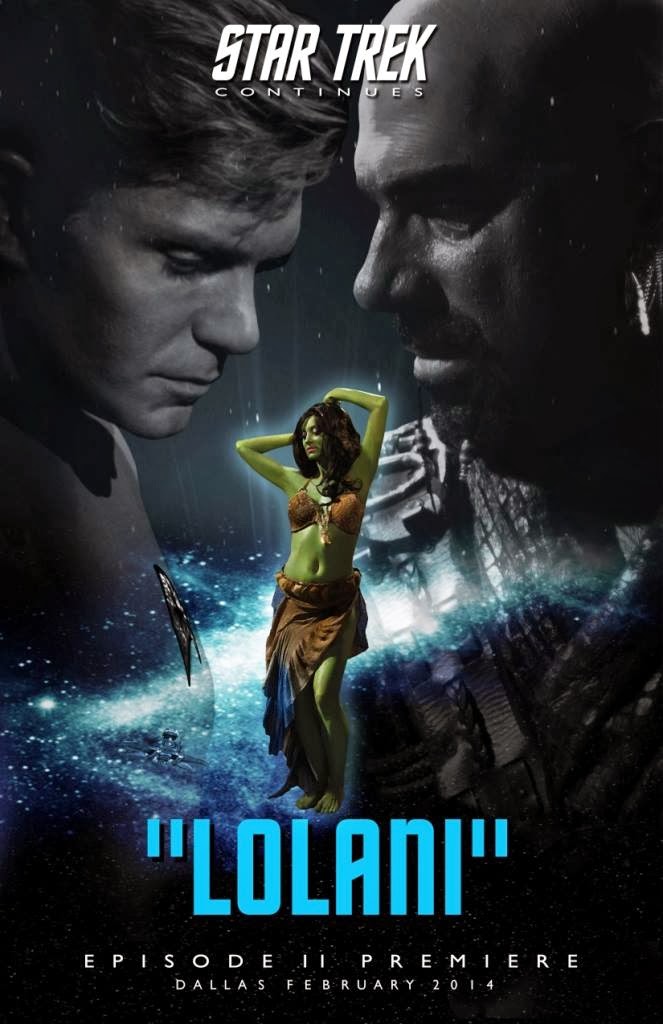 'Lolani' is, like many of the original series episodes it seeks to homage, a story with a message. The eponymous Lolani is an Orion slave girl, played by Fiona Vroom, who is beamed aboard the Enterprise from a damaged Tellarite ship. The Orion slave girls, or 'animal women,' are an iconic Trek image, so much so that the 2009 Abrams movie included an Orion character in her underwear, and it seemed perfectly fitting. Watching back now, it's rather uncomfortable. No one is denying that the green girls are hot, but the slave trade, and implied sex trade, of the Orions was skirted over in the original series. Even Pike seemed to seriously consider slaving on the Orion colonies as an alternative career. Enterprise took it more seriously, and showed the horror of the slave trade in the episode 'Borderland.' The later episode 'Bound' revealed the Orion women used their irresistible pheromones to control the men, which either cleverly inverted the concept, or dropped the ball, depending on your opinion.


To begin with, when we meet our scantily clad heroine, it looks like 'Lolani' could be another questionable and sexist bit of titillation. It is, however, anything but, instead being an extensive look at the horrors of slavery. Understandably, the production keeps things from becoming too graphic, and while there is plenty of violence (perpetrated both by and too Lolani), it is fairly mild. The one exception is a scene told in flashback, in which we learn that Lolani was in danger of being violated by her captors. It's understated, but powerful, and may be triggering for some viewers. Certainly, the production goes much further than an episode aired on television in the 1960s would have been able to, and this is the appeal of it. Taking an original Star Trek sensibility to explore contemporary issues, but being able, by the production's nature, to go further than the original. It's exactly what Star Trek Continues should be doing.


Some early reviews have claimed that the message is obvious, and the execution heavy-handed. Certainly, as a message, 'Slavery is bad' is unlikely to change many people's opinions or prove controversial. Nonetheless, with indentured servitude and sex trafficking still rife in the western world, in spite of our supposedly fair and liberal society, it is a message that still needs to be told. And what is wrong with being heavy-handed about something that is important? The moral dilemma faced by Kirk has also drawn some criticism. Starfleet definitely comes off badly in this, with Erin Gray's Commodore ordering Kirk to return Lolani to her slavemaster, as per Orion law, in order to avoid a diplomatic incident. However, I feel that it works well. It is, essentially, a Prime Directive episode, in that Starfleet is unable to interfere in what is viewed as an internal affair of an alien civilisation. However, unlike that most frustrating genre of Trek stories, it actually has some relevance to our world. The laws of several countries are appalling by western standards, but our military is not able to simply remove people we feel would be better off elsewhere. Diplomatic concerns between nations hold out, regardless of the personal views of those involved.


The story develops in a linear, fairly predictable way. We know that, eventually, Kirk's conscience will lead him to disobey his orders; it's only a question of when. Without wanting to spoil the episode completely, the ending is powerfully and bravely downbeat. The duration of the episode is taken to exploring Lolani's character and her plight, and her effect on the crew of the Enterprise. There's a plot point concerning her overpowering pheromones, but this is dealt with by McCoy and his medical bag of tricks, and it's soon clear that it is not simply her biochemistry that is making the crew sympathetic to her. Naturally, with her being cast as Orion woman, Fiona Vroom is absolutely gorgeous, but she is also a fine actor and gives a dignified, sympathetic performance as Lolani. Also deserving of praise is Matthew Ewald as Kenway, a transporter operator who becomes the first victim of Lolani's charms. To start with, he appears to be a hapless redshirt, but he becomes a strong and noble character in his own right.


Lolani is paired with Michele Specht's character, ship's counsellor Dr McKennah, for much of the episode. While this makes sense, I agree with other commentators that the writers missed a trick by not putting her in the care of Uhura. Although, perhaps having a black African become a focus of an episode on slavery would have come across as even heavier-handed than the episode already does. Spock gets a far meatier role in this episode than in the first, with Todd Haberkorn excelling in the role. The casting that has gained the most interest, however, is that of Lou Ferrigno, the Incredible Hulk himself, as Orion slavemaster Zaminhon. Well, I guess he's used to being painted green. He makes a strong villain for the episode, and a good foil for Kirk.


Ah, now, Kirk. Vig Mignogna has come under some criticism for his portrayal, which commentators are describing as everything from 'spot-on' to 'totally wrong.' Personally, I like him in the role. It's true that is a little more uptight and reserved than the Kirk we know from the original series, but this matches with Shatner's take on the role in the animated series, and can be seen to be moving in the direction of the more thoughtful Kirk of the movies. Given that he also co-wrote the episode, and worked as executive producer, musician, carpenter and who knows what else on the project, I think he deserves a great deal of praise. As, indeed, do all involved in this episode, which simultaneously manages to feel a part of the original series and a timely update.


You can watch 'Lolani' here.


Geeky continuity stuff: 'Lolani' resolves some continuity issues regarding the treatment of women on Orion, suggesting that between the events of Enterprise and Star Trek, the men revolted and took power. Chekov is missing from this episode, perhaps due to reassignment, as he was also absent from the animated series. It's also possible that he was just on leave, and that he will return in a future instalment. If anyone is trying to tie these various continuations together, I'd suggest Star Trek Continues comes first, seeing as it includes a vignette that follows on directly from 'Turnabout Intruder,' followed by New Voyages/Phase II, which includes a vignette with the alien helmsman Arex. Then would come IDW's Star Trek: Year Four, which wasn't terribly good but did lead into the animated series, which then takes us into the fifth year of the mission. Some time after that, the USS Enterprise returns to Earth for a refit, and Kirk is promoted to admiral, in time for Star Trek: The Motion Picture.
Posted by Daniel Tessier at 13:37