2.3) The Changeling
or
Jackson Roykirk vs. Mistaken Identity 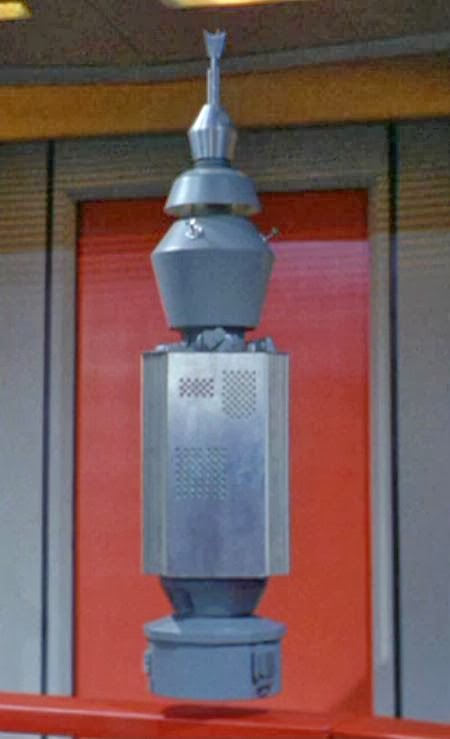 The Mission: Respond to an urgent distress call from the Malurian system, and then ascertain what has killed all of its inhabitants.

Stellar Cartography: The Malurian system has a population of four billion across four inhabited panets. The entire system is cleansed of life by Nomad. Prior to this, a Federation science team was present (so the Malurians presumably weren't part of the Federation themselves).

Killer Computer: Nomad/Tan Ru: The probe attacks the Enterprise with energy bolts that pack the power of ninety photon torpedoes and travel at warp 15! Nonetheless, the ship's shields are only reduced by 20%, so they're pretty impressive too. The probe is only a metre tall and masses 500 kg. The probe calls itself Nomad, and it is discovered that it was created in a collision between the original Nomad and an alien probe called Tan Ru. The merger resulted in an entity that believes it is essential to find the perfect form of life and sterilises anything that doesn't measure up. It is capable of scouring whole planets of life, absorbing memories from human brains, and bringing dead people back to life. The probe eventually decides to return to its origin point – Earth, where it will engage in large scale sterilisation.

Future History: The original Nomad probe was built in the 21st century as a prototype thinking machine, by an eccentric scientist and engineer called Jackson Roykirk. It was designed to be the first interstellar probe (a somewhat more feasible speculation of technology in the near future than the sleepr ships suggested for the 1990s in Space Seed).

Captain James T: Kirk is pretty awesome in this episode, sussing out Nomad's warped mission and how to keep it under control. Once again, he shows he knows his history, recognising the name Nomad. The probe's mashed memory makes it believe that Kirk is its creator, 'the Kirk.' He takes advantage of the probe's confusion between its regard for its creator and the revelation that he's an imperfect biological unit., convincing it to destroy itself. Shatner gives a particularly intense performance here, with Kirk up against a power he cannot hope to control but knowing that is essential he must.

Green-Blooded Hobgoblin: Is described as 'well-ordered' by Nomad. He is able to engage in a mind-meld with the probe (he's getting pretty meld-happy by now. It used to be an intense and significant experience.) The meld allows Spock to learn of the accident that led to the fusion of Nomad with Tan Ru. He mourns the destruction of Nomad.

The Real McCoy: Not an especially strong episode for McCoy, but he gets some good moments, particularly when Scotty is struck down.

Great Scott: Scotty poo-poos the idea that intelligent life could exist in such a tiny vessel (not realising yet that it is an automated probe). When Spock shoots his objection down, he gives him the most hilariously withering look. Scotty gets zapped by Nomad, becoming the first regular character to die in Star Trek and later the first to be brought back to life.

United States of Africa: Uhura's singing sends Nomad a bit batty, and it wipes her mind as it attempts to scan her brain for the reasoning behind it. This leads to a horribly embarrassing scene in which she is being re-educated by Nurse Chapel. Props to Nichelle Nichols for insisting that Uhura would speak Swahili when reverted to childhood, but it can't save the scene from being profoundly idiotic. Not only does it have the (surely unintended) consequence of having the episode's only black character act as a stupid child, it's used for badly judged comedy. And we're supposed to believe that Uhura receives an entire adult life's worth of education and specialised training in time to get back to work next week!

Cliche Count: Kirk talks a computer to death. Four redshirts are vapourised by Nomad. The episode ends with a joke and the classic Star Trek 'funny' music (seriously guys, four billion people have died, there's a time and a place).

Links: The Malurians appear in the Enterprise episode 'Civilization,' set over a century before they are wiped out by the probe. We never see any Malurians in episodes set after 'The Changeling,' so we can't say if any survived the cataclysm by dint of being somewhere else in the galaxy at the time.

The Verdict: A good, solid sci-fi episode, sold by the committed performances of the regular cast. Aside from the awful Uhura memory-wipe subplot, this is a great script, although it's tremendously fortunate for life in the gaalxy that Kirk shares his name with the probe's creator. The script was based on an episode of The Outer Limits, 'The Probe,' with the essential story beats much the same. Clearly, Gene Roddenberry and his team liked the idea, because they went on to use it again for the pilots of both The Questor Tapes and Star Trek Phase II, neither of which were made, but which eventually became the storyline for Sta Trek: The Motion Picture. Nomad is a great prop, plausibly designed and enhanced with some excellent 'probe's eye view' direction. We never learn the origins of Tan Ru, which remains a mystery.
Posted by Daniel Tessier at 14:01