Doctor Who and the Adventures in the Far East 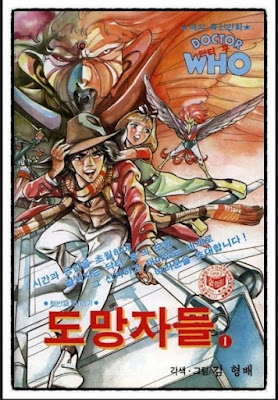 There's been a lovely little flurry on Twitter recently regarding some forgotten Doctor Who from South Korea. The details are available here at broadwcast, which focuses on the overseas sales of televised Doctor Who, but also includes a section on merchandise in each country.

South Korea didn't really go for Doctor Who much in the 20th century, but this little titbit has recently emerged. It turns out that Korean readers had their own, short-lived, probably unlicensed version of Doctor Who as a comicbook release. Treasure Island was a Korean manwha (cartoon format) publication which released hefty 400-page volumes from 1982 to 1992, and included various reprints and licensed materials as well as original creations. Quite how they managed to create their own version of Doctor Who is uncertain, and there doesn't seem to be any evidence that they acquired a licence to do so, although broadwcast suggests they might have cribbed some material from Marvel reprints and worked from that.

Certainly, there's a very clear influence of Tom Baker's fourth Doctor on the manwha Doctor, who wears a clear variant on his costume. These were released in early 1984, when the fifth Doctor's time was coming to a close and the sixth was making his debut, but Tom Baker's image would still have been the most commonly seen around the world. Indeed, his was still the face most people thought of when imagining the Doctor until Tennant and Smith assured the domination of the modern series in younger viewers' minds.

It's an idiosyncratic take on Doctor Who, with the Doctor (from the planet Black) and his companion Joy travelling the universe in a TARDIS that appears to be a rocketship. The only story for which there's any detail so far is "Fugitives," which saw the Doctor fight Nazis and pirates for the entertainment of avian aliens. The article's writer says that's the sort of thing only a manwha book would include, but I can easily imagine it turning up in an early Doctor Who Weekly or Monthly comic strip. If your Korean's up to scratch, you can read some of the adventure here.

It's wonderful that there are still elements of Doctor Who and its spin-offs that are turning up out of the blue like this after all these years. I've always had a soft spot for weird knock-offs and foreign language versions of my favourite properties (the tokusatsu Japanese Spider-Man series being perhaps the greatest). The Treasure Island strips and the manwha Doctor are still obscure enough that there's bound to be more material out there waiting to be discovered.

So far, the manwha Doctor has certainly caught a few fans' imaginations. Most notably, Doctor portrait artist extraordinaire Paul Hanley has added him to his line-up of incarnations. (He's got the rocket fins on the TARDIS and everything.)

The manwha Doctor isn't the only version from the Orient. The Japanese translations of the Muller and Target novelisations published by Hayakawa Bunko from the early 80s featured their own idiosyncratic versions of the Doctor, his companions and adventures. Starting with the translation of Doctor Who in an Exciting Adventure with the Daleks, with a new title that translated as Space-Time Big Bloody Battle, the Japanese Dr. Hu appeared Asian but in the first Doctor's clothing style, and battled unique versions of the Daleks and truly unsettling Autons. Then there's Dr. Who, a completely unrelated but surprisingly Doctorishly-stylised villain from the tokusatsu movie King Kong Escapes. Who's to say there's not a universe for each of these alternative Doctors in the great Who-multiverse?

A crossover between the manwha Doctor and the Hayakawa Doctor, at least, has got to be worth something.