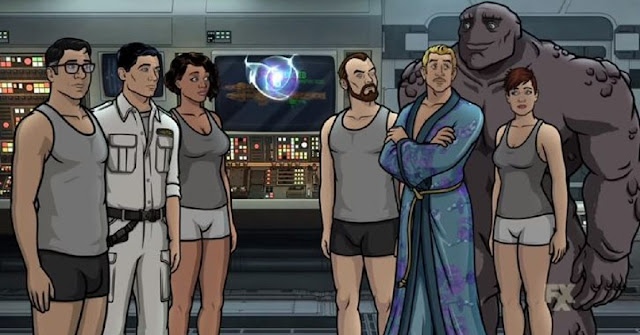 Almost ten years after its pilot episode "Mole Hunt" was aired, the great Archer (probably) comes to an end with Archer: 1999, its space-themed tenth season. Of all the genre-themed settings we've had over the last few years, this is the one I've been looking forward to the most. It's not how I'd have done an Archer sci-fi series - I'd have gone for a full-on Star Trek parody - but it's a great celebration of sci-fi tropes and beloved cliches of the genre. In spite of the name, there's not really any Space: 1999 elements in there (not even a single moon is blown out of orbit to become a gigantic wandering base). The main inspirations are clearly Alien - always a source of referential moments in Archer - and Star Wars, with a mix of long haul space capitalism and swashbuckling space adventure.

Not that there are no Trek elements, though. The gladiator battle in episode two could have fit in the original series with no trouble, while the alien critter in episode three, "The Leftovers," is absolutely a Cardassian vole from DS9. There are plenty of other little nudges and secret ingredients, too - there's a certain Firefly-esque flavour to a lot of the proceedings, not least in the retooling of Adam Reed's character Ray Gillette as a space courtesan. He's basically the male version of Inara, only with less poetry and more cake.

The series is set aboard the starship MV Seamus, a space freighter that is somehow both clapped out and tremendously well-equipped, co-captained by Archer and Lana after their marriage ended and they won half the ship each in the divorce. Interestingly, some of the core characters have been brought back to be closer to their "real" versions than previous iterations like Danger Island and Dreamland. While Archer's always basically the same, Lana's role has varied a fair bit the last few years, and Archer has always been pursuing her in his fantasies. Here, their relationship is very much like how it is in the series' reality. Cyril has also been brought back in line after two seasons as a villain, now in a sort-of relationship with Lana (although it gets very little attention) and acting as the ship's first mate and "space accountant."

Cheryl/Carol is basically the same as ever (down to the glue-eating) but is now the ship's crackshot laser gunner, a job which she finds incredibly boring because she's so good at it, while Pam, in her greatest transformation yet, is a huge alien rock monster of indeterminate gender, not that it's affected her personality much. The brilliant Lucky Yates has finished his stint voicing a parrot as Krieger is back, now an Ash-style synthetic human, full of android milk and just as questionably committed to mad science as he ever was in human guise.

Giving the name "Mother" and the early hints as to the Alien-esque setting, I expected Mallory to be a computer, but instead she's a sort of holographic sentience who can appear as either a ball of light or Mallory's recognisable human form. Mysteriously, she seems to be Archer's literal mother in this reality, suggesting she's a recreation of a real human rather than an AI like Krieger. She's still an alcoholic.

Archer: 1999 works as a tongue-in-cheek space adventure, happily sending up the genre while making it clear that Reed and his co-writers love sci-fi and space opera. Some elements that might have translated well to the setting are surprisingly altered. Barry is back, for example, and despite being a cyborg in the main reality and therefore an easy drop into this environment, he's now the fully robotic Barry-6, an IG-88-like killer droid. Although he's a recurring villain, he's significantly less threatening than his nightmarish Dreamland incarnation, and becomes a laughing stock by the end, which might suggest Archer's subconscious slowly moving past his hatred of his archenemy. (On the subject of cyborgs, Ray was basically one by the middle of the main Archer run, so it's kind of surprising he's completely human here.)

The series has the same pros and cons as the previous couple of seasons, only more so. Dreamland worked well by not massively altering the format from where it had been for the previous year, but playing up the setting. Danger Island through itself into the setting, making big changes to story style and worked as an adventure series, but the comedy suffered. Archer: 1999 continues this trend, with the space adventure working brilliantly and looking truly fantastic for the most part but easily being the least funny of the seasons so far. Not that there aren't laughs along the way; episode five, "Mr. Deadly Goes to Town," starring Matt Berry as a sentient weapon of mass destruction, is a solid sci-fi adventure and pretty hilarious. On the whole, though, the reliance on running gags is becoming tired and serves mostly to remind the audience of when earlier seasons did it better. It's hard to disagree when Barry-6 calls it "derivative."

The final challenge for season ten is to tie up the three-year-long Archer-in-a-coma storyline, which intrudes into the penultimate episode before taking up most of the final one. Logic pretty much goes out the window here in favour of weird visuals and call-backs. There's some exploration of the psychological cost of Archer's mental battle as he falls apart, but there's no consequence, as he simply wakes up to see Mallory in his hospital room. Still, it's a nice final scene and strangely moving, albeit equally disturbing in its oedipal way. If this is the final season of Archer as has been stated, then it's a pretty anticlimactic ending. However, Reed has suggested an eleventh season might happen, in which case a final, back-to-basics approach could help round the series off more satisfyingly. Assuming, of course, that Archer really did wake up...
Posted by Daniel Tessier at 20:27