I Was Raised by Spacemen 3 - Super Mario Bros. (The Movie)

Some films are indisputable classics. Others are a matter of taste or preference. And some are just awful, but there are those of us who love them anyway. One such film is Super Mario Bros. 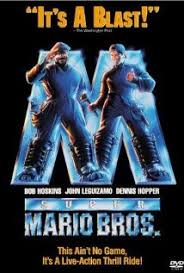 Super Mario Bros. was released in 1993 to cash in on the hugely popular Super Mario games series, which could easily be the subject of one of these essays itself. I'm guessing nobody reading this needs an introduction to the Super Mario games, and if you do, you've had a terrible, neglectful childhood and must start playing these things now to make up for it. I didn't get to see the movie on release, but it was released on video the following year, when I was ten, and I recall picking it up pretty much as soon as it was out. In fact, we rented it first, because that was the financially sensible thing to do in those days, when tapes were expensive. We weren't a game-playing family for a long time. We didn't have a vast amount of free income at the time, and games consoles were an extravagance. However, we did eventually get a household Gameboy, followed by, one wonderful summer, a second-hand Super NES. Oh, such a joyous summer.


Back then, you were either a Nintendo household or a Sega one. We were Nintendo through and through. We bought the official magazine (back when it was the Nintendo Magazine System, or NMS, and was actually bloody good). We loved Mario, and Yoshi, and Donkey Kong and Zelda. Next door were a Sega crowd, and while it was perfectly permissible to go play Sonic on their Mega Drive, it was Nintendo only in our house. It was like supporting a football team, only important.


By 1993, we'd moved to a pokey little shithole with no Sega playing neighbours, but we had Super Mario World and Mario Kart on the SNES, so it wasn't so bad. In fact, by the time we got the video, Yoshi's Island might even have been released by the time we owned a copy of the video. While the first Super Mario Bros. game had been released way back in 1985, it had begun a long and sprawling series of games of various formats, with the classic platformers at its core. There were cartoon series already, The Super Mario Bros. Super Show and Super Mario World, which weren't exactly what you'd call good, or even watchable, but were entertaining enough for small people who loved fat Italian plumbers. A movie series was the next obvious idea, and it's not surprise that a big budget blockbuster was planned. It didn't really turn out that way. Super Mario Bros. tanked completely. It was a critical and financial failure, and its stars panned it even as it was being released. 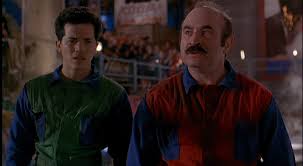 The thing is, the writers and producers of this thing have clearly thought about it. One of the writers, the only one who seems to have done anything else, was Ed Solomon, who co-wrote Bill and Ted's Excellent Adventure and, later, Men in Black. He knows how to craft a sci-fi comedy film. He and his co-writers have genuinely thought about how the utterly bizarre world of Mario and Luigi could be translated to a live-action film. Some things are logical, if odd: they're the Mario Brothers, so their surname must be Mario. Therefore, their names are Mario Mario and Luigi Mario, and they are orphans, Mario having raised his baby bro. Others are frankly bizarre, but it's understandable why they came to the conclusions they did. The original game was set in the Mushroom Kingdom. Well, a kingdom full of mushrooms would be disgusting, wouldn't it? The brothers are plumbers, so day-to-day plumbing has to be a significant part of the adventure. Princess Daisy is from the Mushroom Kingdom, so she's part of that world, but we need to involve her in this world... Oh, and Super Mario World was set in Dinosaur Land, so we need to combine that in there somehow. How to juggle these disparate elements?


What we ended up with was an utterly baffling story in which two realities exist side by side, the universe having split when a meteorite hit sixty-five million years ago. (In reality, it hit what is now Mexico, not Brooklyn, but anyway.) In one reality, the dinosaurs were wiped out, and the mammals took over and evolved into us. On the other, ecologically damaged Earth, the dinosaurs survived, and evolved into a civilisation of oddly human-looking intelligent reptiles. Why the dinosaur people are so humanoid that they have hair and tits and stuff, is unexplained, but they do lay eggs, because Daisy was abandoned in hers, when her mother escaped across the dimensional divide. For some reason, only she can reunite the dimensions safely, with her little chip of space rock.


It's mental. Mario is played by Bob Hoskins, who described it as the worst role of his career. Luigi is played by John Leguizamo, and frankly, I find it hard to believe that those two are brothers. They are two Italian American plumbers struggling to make a living in the face of the Scapelli Corporation. Neither Hoskins or Leguizamo appear to be enjoying the movie very much. Samantha Mathis plays Daisy, who, despite being a destitute orphan raised by a convent and only twenty years old, is already senior enough at her university that she has been put in charge of a major fossil excavation in the middle of New York. You see, Scapelli has blasted open the rift between realities. Oh, and now King Koopa is after Daisy and her meteorite piece, so has sent his cousins Iggy and Spike (a pretty damned good Fisher Stevens and Richard Edsons) through to find her.

God, yes, King Koopa. You can tell that Dennis Hopper isn't enthused; it's actually one of his more sedate performances. He was second only to Hoskins in complaining about the production of the movie. But god, he's great. A sinister corporate overlord, who boasts of being descended from the Tyrannosaurus rex, and has seized power using a de-evolution machine. It's mental. He takes mudbaths between his evil schemes. He keeps poor, cute little Yoshi (a pretty good bit of animatronics, it must be said) chained up. Fiona Shaw, for some reason, plays his bit of stuff, Lena, who has her own plans of conquest. Mario and Luigi must rescue Daisy, and Mario's girlfriend Danielle, who's there too, and stop Koopa uniting the worlds and taking over. But there's still time for a dance at the Boom Boom Bar, to 'Everybody Walk the Dinosaur.' It's... words fail me.


The brightly-coloured world of the Super Mario games has been replaced by a grungy, seedy alternative New York (Dinohattan, natch), yet several of the ideas are quite literal translations of elements in the games. Yoshi comes good when he grabs Lena with his super-elongated tongue. The deposed King (Lance Henriksson, in a brief, random cameo) has been de-evolved into fungus, allowing a bizarre homage to Super Mario Bros. 3, when he is returned to his natural form. You know, like when you get to the end of a world and beat the boss, and the King has been turned into a walrus or something and you turn him back. Exactly like that, but with more mucus. There's a chase through a pipe, and a brilliant extended joke with a wind-up Bob-omb. 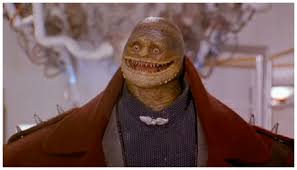 Some of the decisions are odder. Koopa's shock troops are called Goombas, which, in the games, were little mushroom-like creatures with huge heads and not much else. In the movie, they are poor unfortunates and political prisoners who have been de-evolved into hulking reptilian beasts with tiny heads. Koopa Troopers would have been a more logical thing to call them, surely? Not that they're much like them, either. The Goombas come in two strains, Jurassic and Cretaceous, and I'm quite certain that they resemble nothing in the fossil record. Also, why is Mario's girlfriend called Danielle, and not Pauline? There's value to be had in obscure references.


Frankly, it's easy to see why it has such a poor reputation. The script is mostly witless, it bears only the most cursory resemblance to the source material, none of the cast can be bothered (except Frank Welker, providing amazing voice work as usual), it's sloppily directed, it looks cheaper than it should on its budget and it turned Bertha the fish into a huge black dominatrix in red rubber. But on the other hand, I was ten when I first saw it, and it really is a joyously ridiculous waste of time. There are also three very good reasons to love it:


Super Mario Bros. is my favourite crap film. Dennis Hopper and Bob Hoskins may have hated it, but it's what I will remember them for the most. It's about time we had a sequel (actually, there is an unofficial one here). Wario should be in it. In fact, I'll write it. Who says there can only be two dimensions?

One last thing: apparently, they looked at getting Danny de Vito or Tom Hanks to play Mario, and Big Arnie to play Koopa. So, this movie could have been even weirder...
Posted by Daniel Tessier at 18:00

Email ThisBlogThis!Share to TwitterShare to FacebookShare to Pinterest
Labels: dinosaurs, I Was Raised by Spacemen, movies, Super Mario Bros