The great strength of contemporary Doctor Who is its variety. If you don't like one episode, then there's no need to worry, because next week it'll be something completely different. Each episode riffs on a recognisable genre, be it steampunk, sci-fi adventure, historical humour or existential horror. This week, it was the turn of the hustle and heist. It's a straightforward enough idea: take four unlikely characters with their own strengths, stick them with an underhand mission and follow the twists and turns. It's a popular style, and there are any number of movies and TV series trying it. Doctor Who's gift is to mesh its genre-of-the-week with its own blend of science fiction, fantasy and horror to create something new. At it's best, it creates something truly unique. Sometimes it's a crashing failure. More often than not, it's a qualified success, greatness tantalisingly just out of its grasp. So it is with Time Heist.


The risk with any kind of genre lift is falling foul of the clichés. When you knock two genres together, there are twice as many clichés to avoid. The heist is a plot-heavy story type; forty-five minutes does not leave much room for exploration and originality once each set piece has been resolved. Time Heist is populated by the thinnest of characters, none but the Doctor really getting any but the most perfunctory of characterisation. It is perhaps for the best that the Doctor is front and centre here, one again the leading man in his own show after several episodes in which he was, to a greater or lesser degree, sidelined. There's less focus on the effect the Doctor has on others here – although that is still present – and more on the man himself. Nonetheless, even the Doctor's characterisation is fairly shallow here. There's his “professional detachment,” an excellent choice of phrase there, along with his arrogance, his controlling attitude, and his barely submerged self-loathing. This is all something worthy of far greater exploration, but there just isn't time for it in a single episode story.


Thankfully, Peter Capaldi is more than capable of filling in the gaps here. He can give the shallowest of material depth. Even the necessary expositional scenes, little more than the Doctor standing around explaining things, are a triumph when Capaldi lets rip. The darkness we've been promised is there, an intensity in his gaze that imbues even the flimsiest scene with fire. This Doctor is cold, but it's a shell. He has emotions, but he puts them aside for the mission. Soldiering on, not looking back until the job is done. “He's not really like that,” says Clara, and while there's a sense that the line is there to reassure the viewers still reeling from the loss of cuddly Matt Smith and charming David Tennant, there's a truth to it. The occasional moment, when his awkwardness becomes apparent, or that huge grin breaks through, reminds us that our Doctor is still there underneath. 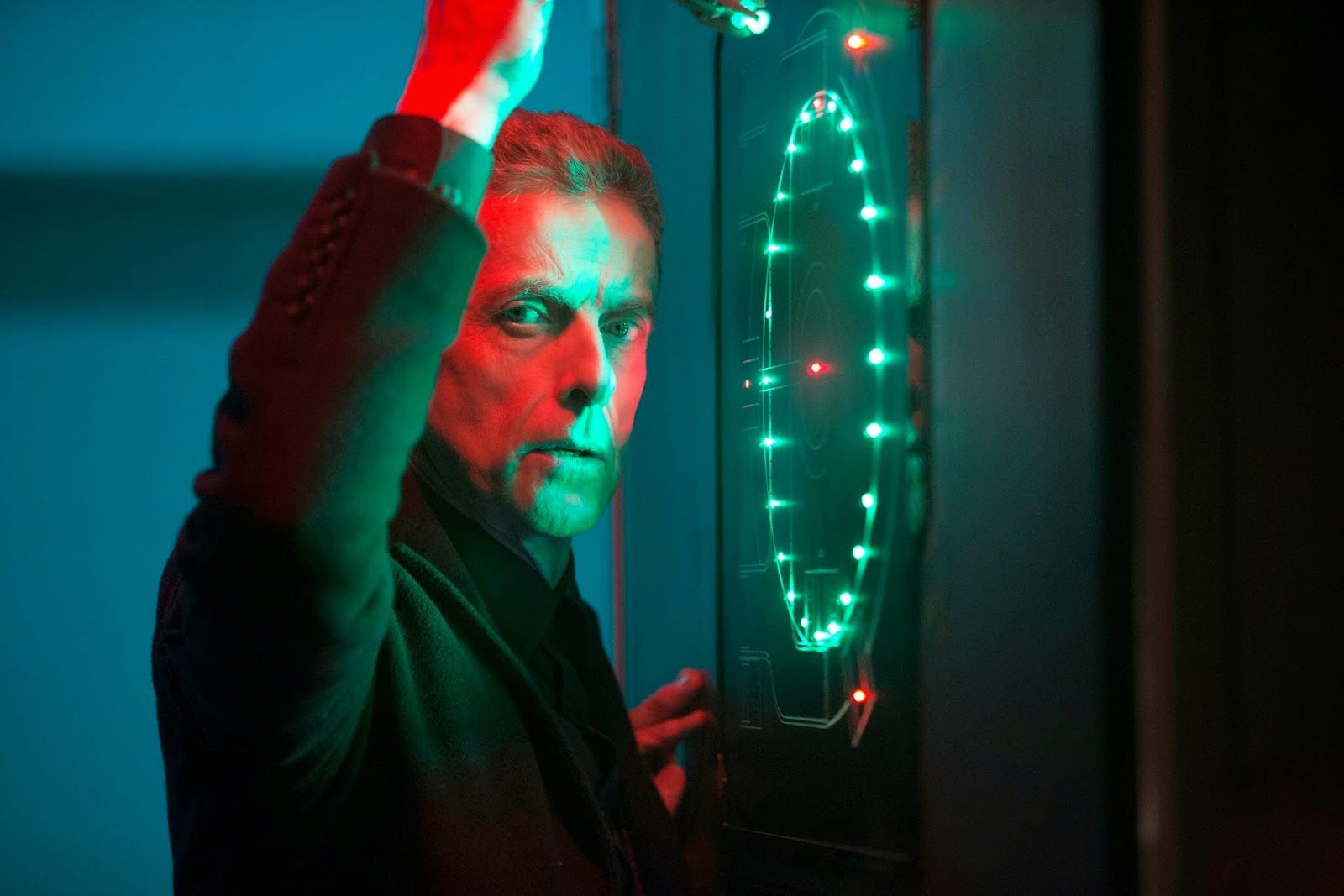 With the Doctor at the forefront though, it is Clara who is pushed to the sidelines, and with such a paper-thin character to begin with, she can't survive it. Jenna Coleman does what she can with the material, but there's so little of it to go round. Unlike the other two comrades we find ourselves with, Clara seems to have no purpose on this mission. She's just there because she's the companion, so she has to come along. There's no sense that the Doctor actually required her on this mission, save for the desire to risk her life in a huge display of showing off. Perhaps they should have gone to Brighton after all. I might've bumped into them there.


The other two bank robbers, Psi and Saibra, are somewhat better, given the opportunity to at least express reasons for being involved. Unfortunately, it's here that the episode first slips into cliché. A cyborg who can interface with the computer systems and a shapeshifting mutant who's practically dropped out on an X-Men comic (really, she's one part Mystique to two parts Rogue). They're the most likely characters we'd expect to see in a sci-fi bank robbery, save perhaps for some nutter with a blaster gun, and this being Doctor Who, weaponry is kept to a minimum. Thankfully, both Jonathan Bailey and Pippa Bennett-Warner are both capable of holding a scene and give the characters life beyond their two-dimensional concepts. They're likeable enough that it would actually be a pleasure to see them again in the series. Given Psi's exchange with the Doctor towards the end, I feel we might. 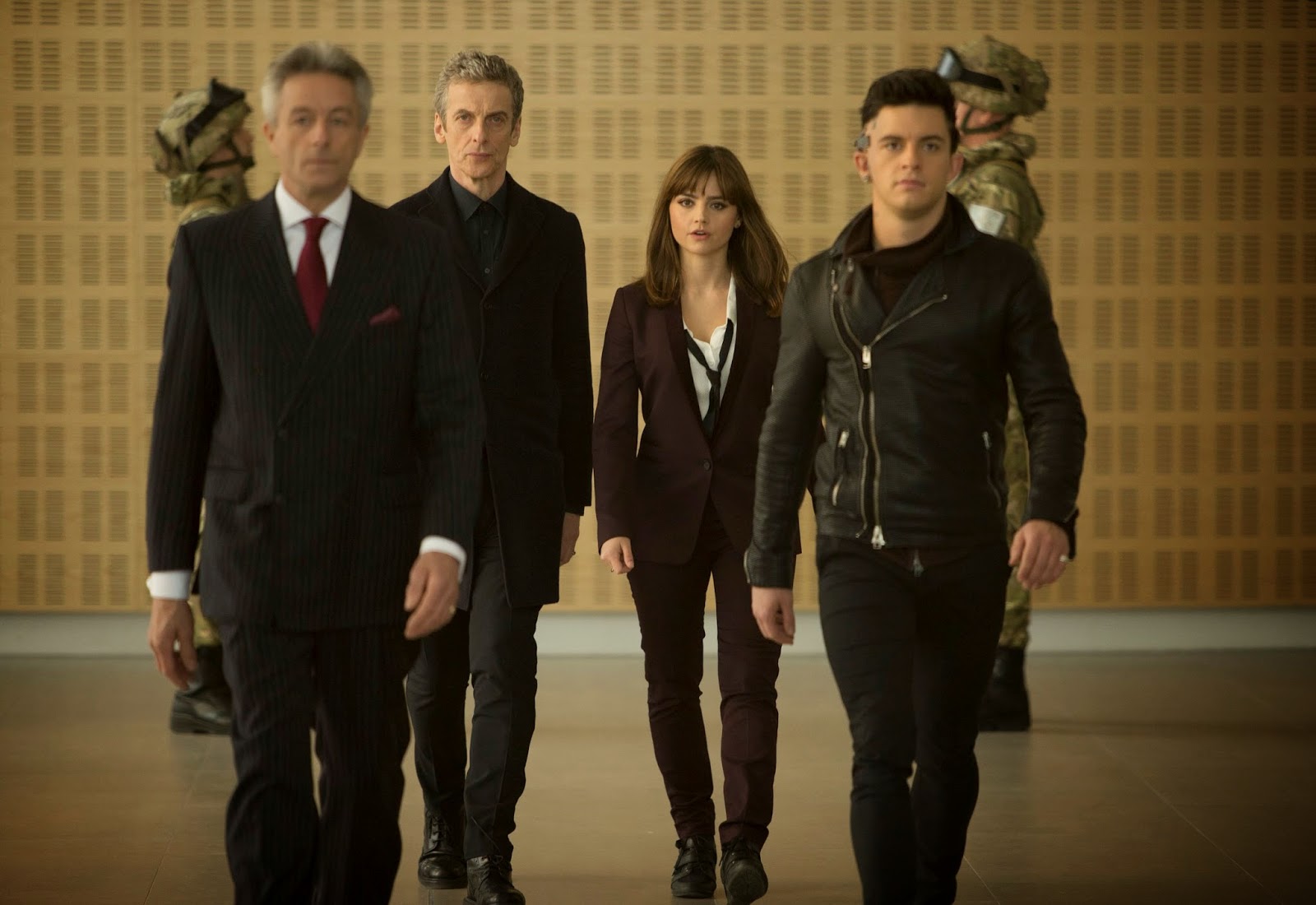 Ms, Delphox and her progenitor, Madame Karabraxos, are equally thinly sketched, but somehow it matters less when we're talking about the villains. Staggering greed and sociopathy are precisely what this story needs in its antagonists. Keeley Hawes does a beautiful job in bringing both characters to life. They are naturally similar, but distinct, Ms. Delphox's confident demeanour nothing but a mask compared to Karabraxos's calm self-assurance. Even there, though, the cracks begin to appear when the Doctor faces her down. Under normal circumstances, we'd expect the Doctor to bring Karabraxos's world crashing down around her. This time, however, he is constrained by causality. Her bank may be destroyed, but Karabraxos lives a long life, only to find some sort of redemption at the end of her days, and the Doctor must let it all pass so that the correct chain of events can play out.

We've seen cyborg, shapeshifters and the monstrous corruption of wealth many times, but Time Heist does have some new material. The Teller is a truly exceptional creation, an intriguing concept brought to life by an effects team at the top of their game. While the idea of a psychic protecting a corporate establishment isn't original, in the normal run of things we'd expect some ethereal being or a bald-headed mystic. Something serene, standing, or more likely hovering, apart from the grubby humans around it. Here, though, we get the complete opposite. A leathery-skinned beast howling with anger and pain, its huge body bound in disturbingly Guantanamo Bay-like orange overalls, the Teller is far from the usual sci-fi telepath. The use of a combination of animatronics and costuming is a wise decision, giving the creature a powerful physicality that a CG rendering would lack. The blinking eyes on the end of its slug-like antennae seem alive but alien. It's an excellent addition to the parade of Doctor Who monsters. 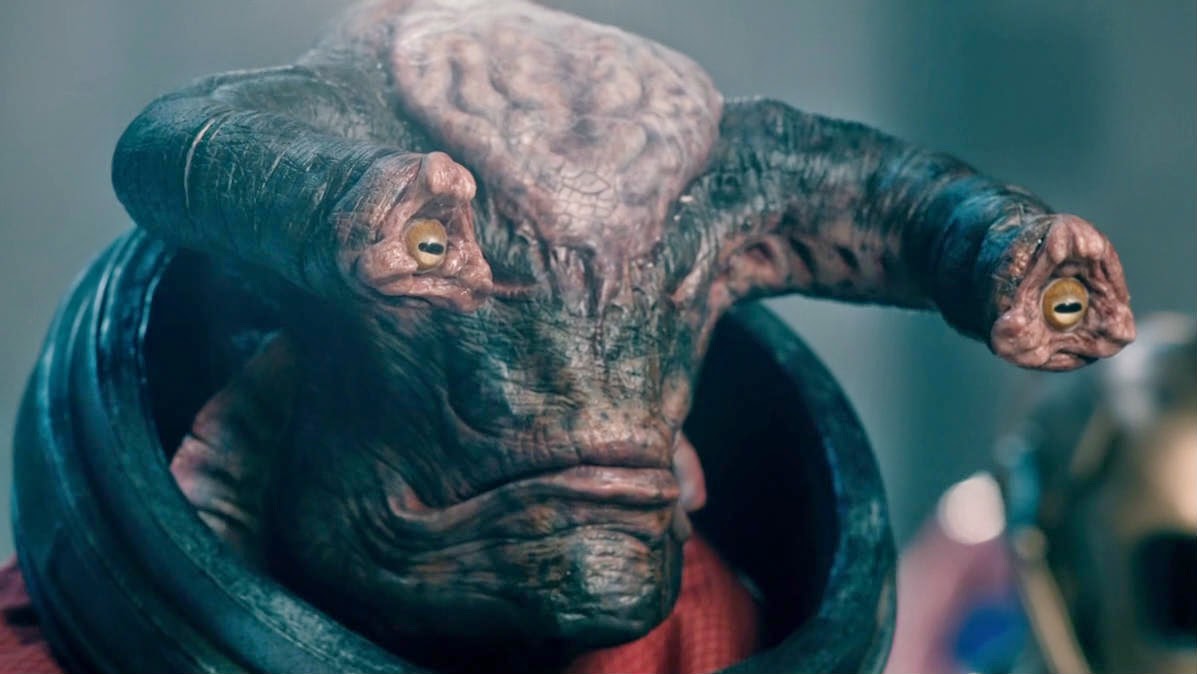 Time Heist combines these elements to create an enjoyable romp with a darker edge, but it is somewhat lacking in impact. Perhaps this is down to the sheer predictability of its story. While a little predictability is fine, even entertaining, as the viewer can enjoy spotting what's coming up, the various twists of Time Heist were all so readily signposted that they failed to make any kind of impression. The Doctor reacts with surprise when he realises that “this isn't just a bank heist – it's a time-travel heist!” Yet this is, in the grand tradition of Doctor Who serials of old, given away in the title. The identity of the Architect as the Doctor himself is so obvious that the surprise reveal is nothing of the sort, while the shredders, supposedly deadly disintegration devices, are given a visual effect so reminiscent of a thousand teleporters over the years that this too is no surprise. The only element that may come as a surprise to attentive viewers is the identity of Karabraxos, but even then, Ms. Delphox's comment that her “face fits” hints so heavily at her nature that this was at least guessable.

Perhaps this is missing the point, though. Obvious though the twists are, they keep things moving through the forty-five minutes of airtime and prevent the story from being just a runaround in some corridors. With all the cast giving it their all, even unsurprising revelations have resonance and make for diverting entertainment. All in all, while the ingredients of this story may largely be obvious and old-hat, the recipe as a whole is an enjoyable one. Time Heist is entertaining mid-season Doctor Who, enlivened by some fine performances, particularly from our leading man, who is making his mark as a truly magnificent Doctor.

When Psi is browsing the files for data on criminals, he brings up images of various beings, including  The Trickster and Androvax the Veil from The Sarah Jane Adventures, Captain John from Torchwood, Kahler-Tek the Gunslinger from A Town Called Mercy, Abslom Daak from the DWM comic strips, an Ice Warrior, a Slitheen, a Terileptil and, bizarrely, a Sensorite. The idea of a criminal mastermind Sensorite is strangely appealing.

Threads: Nice dark shirt for the Doctor this week. Clara's date outfit is a fun suit-like number, which is handy for looking the part in an off-the-cuff bank heist.

Best Line: "Shut up, everybody. Just shut up! Shut up, shut up, shuttity-up-up-up!"
Posted by Daniel Tessier at 12:01