Last one of the year. After this I shall be dropping almost everything due to the mighty expense of Christmas. It'll probably be a couple of last issues of short runs and a couple of the Spider-Verse tie-ins to keep me going till the new year. 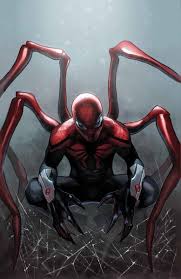 With so much Spider-Man related material coming out, it's tempting to assume it's just another huge cash-in event. Marvel is a bitch for those lately. However, most of this has actually been very good. Whether we really need Spider-Verse and Spider-Verse Team-Up as separate titles is debatable, but this short run anthology series is well worth having. Very brief stories in both new and established realities, each portrayed in a different style. The strip in the Marvel Mangaverse is a slightly weaker start, but the Steampunk Lady Spider, facing a steampunk Sinister Six, is fantastic. We get a wonderfully cutesie story for Penelope Parker on Earth-11, and a newspaper-style strip which is quietly ingenious. Looking forward to the second issue.

This is the least exciting of the three Spidey releases these couple of weeks, seeing that it exists mostly to set up further adventures on the remaining spin-off titles. Seriously, the last few pages involve several groups of Spider-persons heading off into their own titles, helpfully annotated so you know where to send your money next.Still, it's quite fun, we have both primary Peter Parker and a time-displaced Otto Octavius as Peter Parker, plus Miles Morales from the Ultimate universe... yeah, this is complicated if you're not already steeped in it. But there is a Spider-Punk with spikes on his head.

Having removed the grotesque Manara cover from the line-up, an altogether more pleasing new start for Spider-Woman arrives as one of Spider-Verse's many spin-offs. This is actually mostly about Silk, making good mileage from the contrast between the experienced Jessica Drew and the naive but tough Cindy Moon. Plus, 1930s Noir Spider-Man along for the ride. Whether this title can maintain any steam once the Spider-Verse events are over is another matter.

What I like about this title is that, rather like Marvel's Ms. Marvel, the heroine comes across as the sort of girl who might actually be reading these books. Barbara Gordon juggles complex work with an increasingly difficult personal life - so far, so standard, but the details are spot-on. Hers is a world of awkward romantic potential, fragile friendships, social networking and anime marathons, albeit with a sinister faux-Batgirl manipulating her enemies behind the scenes. Really just a  lot of fun.

I picked this up because Clayface is on the cover, and he has been one of my favourite Bat-foes since I saw the excellent "Feet of Clay" episode of the nineties animated series. The last strip of this issue begins a new story from The Dark Knight, with a powerful new origin tale for Clayface for the New 52. Really great stuff, with some appropriately oily looking artwork from Alex Maleev. Before that, though, are two dull comics from Arkham Unhinged and Detective Comics, both essentially very nicely drawn exposition, although "Icarus," Detective Comics' new story, shows promise.

Ah, now this is more like it. While I think I'd prefer it if Thor had actually become female rather than be replaced by an as-yet-unidentified woman, but this is still great stuff now that she is finally here and kicking Frost Giant arse. New Thor's inner monologue reads pretty modern, so that suggests she's from contemporary Earth. A former Avenger? When she's speaking aloud though, she sounds just as portentous as the Odinson, posh typeface and all. It's lovely stuff.

This, on the other hand, is really rather disappointing. Sam Wilson is now Captain America, although he still has his Falcon wings, while Steve Rogers is now retired because he's caught old age. Steve's son - who is actually Zola's son - is the new Cap's sidekick, Nomad. So with these somewhat baffling rejigs out of the way, this is really quite boring. Stilted dialogue, dull moral arguments, no plot to speak of.

How Abnett manages to make a very straightforward tale of alien invasion so compelling is beyond me. Aside from the obvious incongruity of having Wind in the Willows inspired characters fighting alien death machines, that is. These are fairly cliched characters brought to life by some deft insights, making this a quietly powerful story.

Guardians of the Galaxy #21 (Marvel)

Jumped ahead here, with the aid of some library copies of the trades. Current Guardians line-up consists of Star-Lord, Drax, Gamora, Groot, Rocket, Agent Venom and Capt. Marvel, although the great lady is not in this issue, which kicks off the "planet of the symbiotes" storyline. Have Marvel really never played this idea before? We're still a long way from reaching the aforesaid planet here, with this focusing on how utterly stupid it is to send Venom into space as Earth's representative. But this is cool. Venom extrapoplated to the nth, and that last page - yeah, very cool.

Excellent to see Kira enter the fray here. Of course she's going to be leading the resistance - who else would? Slightly odd to have Keiko O'Brien captaining a ship, but it gives her relationship with Miles a new dynamic. Not as fun as seeing Miles and Scotty bouncing off each other. This is still good fun, even if the DS9 characters all talk like they've swallowed a dictionary. Still two parts to go though, and the pace is starting to flag.

Twelve's first strip story for DWM comes to a close in a clever if perfunctory way, with both Clara and the Doctor shouldering the world-saving duties. This nicely ties into developments in the TV series, with Clara displaying more and more worryingly harsh Doctor-like behaviour. Pretty bloody good start to Twelve's era in the mag.

And finally, Grant Morrison's answer to Watchmen. Some might say it's a little late to be writing an answer to Watchmen. The last twenty years of superhero comics have been answer to Watchmen. Nonetheless, this is a very well written comic. Morrison gets to use the original Charlton Comics characters (albeit in their somewhat updated Earth-4 incarnations) rather than having to settle for barely disguised replicas as Alan Moore had to. While Moore had Dave Gibbons to bring his story to life, Morrison has Frank Quitely. I've bought some bad comics in the past on the strength of Quitely's artwork. It's intricate and powerful, and perfectly matches the comic's tone. Experimenting with narrative and causality, Morrison has not written an easy story here, but it's well worth picking up and working through. It needs to be read through a couple of times to fully appreciate it, I feel, but this is fine work.