So, I might have gone a bit nuts at the comic shop, but I haven't been for almost a month and it I did get a massive great tip that paid for it all. I'm splitting these reviews into Marvel and non-Marvel. I'll be honest, I'm really not feeling it for the upcoming Secret Wars event. A big, DC-style reboot is not something I want for Marvel. We don't know how much, if anything, is being retained from the current storylines, and pretty much everything that happens right now is potentially irrelevant and going to be erased a few months down the line. The bulk of the current titles are being cancelled in the summer, which is a bit shite considering a lot of them only started a few months ago.

I notice that all the solo hero titles I'm picking up now, bar one, feature female lead characters. Whether this is significant I don't know, but it's gratifying that it's an option to have all female heroes right now.

Spider-Verse is finally done and dusted, and we're pushing on with Peter's company and his new initiative to rehabilitate supervillains. Socially responsible superheroing, you see. Having caught up with some of the preceding Superior Spider-Man storylines, I think Anna-Marie is the real hero here. She finds out that her boyfriend is not only Spider-Man, but actually Dr. Octopus inhabiting the body of Spider-Man, and that he is now dead, but she's still holding it together. Good to see Black Cat's storyline being focussed on again. Just a shame this is one of the titles getting cancelled - although of course there will be a Spidey title, Doc Ock and all no doubt - so I'll probably see this one through to the finish.

My first issue of Spider-Woman for a while, which I think suffered from starting in the middle of the Spider-Verse event. I like this though; witty script from Dennis Hopeless and really appealing art style by Javier Rodriguez. This concerns Jessica Drew quitting the Avengers and trying to go it alone as a regular street-level superhero, and not doing terribly well. It actually ties in quite nicely with ASM's themes, given that current and former costumed villains are being victimised, so there's potential for something interesting here. A good comic, altogether - and I love Jessica's new costume. Especially the gloves.

The other Spider-Woman is going strong. I was confused for a moment, thinking this was the same artist using two styles, but this is Robbi Rodriguez, and it's quite something. Something all the Spider-related titles do well, when they're on form, is mixing snappy, funny dialogue with proper, human-level drama, and Spider-Gwen is the best of the bunch. (Although I admit I haven't read any Silk, Spider-Man and the X-Men or recent Ultimate Spider-Man for comparison, but there's a limit.) Also, Spider-Ham. Gwen and Peter Porker are the most improbably brilliant double-act. It also uses the parallel universe angle well by keeping us guessing to seemingly familiar characters' motives and allegiances. This is a perfect example of what Philip Sandifer is calling the "New Pop" comics movement, and it's tremendous fun. 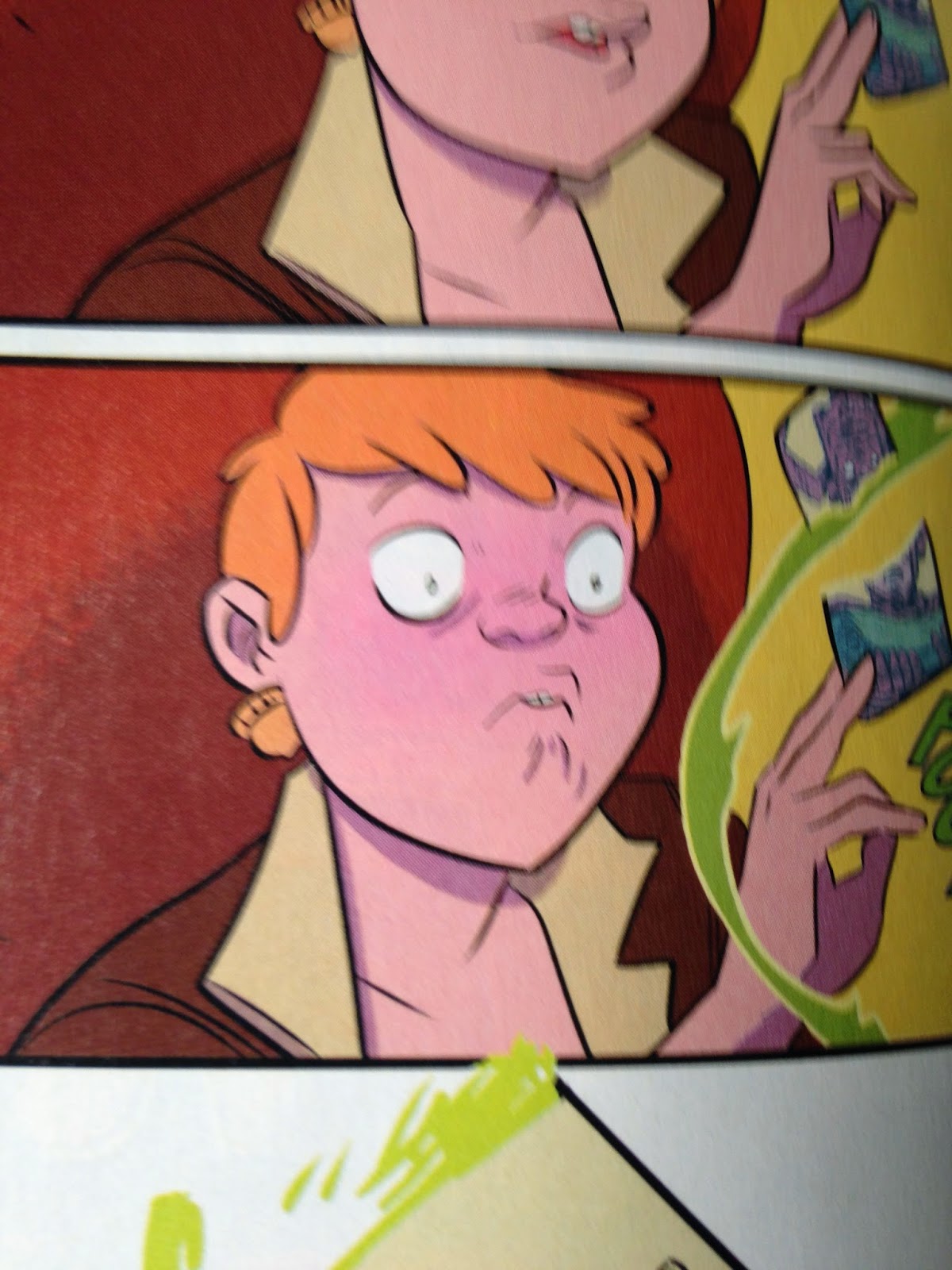 As is North and Henderson's Squirrel Girl, which is something very close to comedy pop perfection. This is genuinely, laugh-out-loud funny, which is something that, in spite of the medium's name, very few comics are lately. I think the cover price is worth it just for Doreen's face here.This is clever, though, not only being very inventive with the unlikely squirrel-wrangling powers, but effortlessly sending up the superhero trope of constantly piling crisis on top of crisis until the stakes are so absurdly high it really doesn't mean anything anymore. I'm actually keen to see how Doreen does in Secret Wars. But first, Squirrel Girl vs. Galactus, on the Moon.

Still going strong, and focusing very strongly on the Inhuman angel right now. With Marvel already pushing Uncanny Inhumans it's pretty clear they're trying to put them on a par with the X-Men. Not long ago, Kamala Khan would have been made a mutant, not an Inhuman, but the story is now being written with the movies and TV series in mind. Ms. Marvel provides another angle on it all, though, drawing parallels between villainous Inhuman fanatics and Islamic extremists. It's not hammered home (and again, it would have been mutants not long ago), and it's portrayed cleverly. "There's always that one group of people who think they have special permission to terrorize anybody who disagrees with them. And then everybody else who looks like them suffers." The most important series in comics right now, and if you don't get why, read this.

Picked this one up on a whim, sold by the wonderfully absurd cover image of MODOK asking for help with his special Secret Avengers headband. MODOK in the Avengers is weird enough, before the lunacy of the actual plot. This is clearly running behind the Spider titles, since Spider-Woman is still in the Avengers here, but whatever. Not a clue what's going on, but it's fun.


And to think, I almost dropped this after one mediocre issue. In issue six, Jason Aaron provides some truly excellent writing. It's mythic, in the way that Sandman and Lucifer used to be, and probably only The Wicked+The Divine is really managing each issue right now. Mythic in that real people living mundane lives find themselves coping with vast, cosmic events, where even the gods are portrayed as messed up little people. This is exactly what Secret Wars needs to be if it's not going to suck. With sales of the female-led Thor currently ahead of the previous classic version, I think we can safely say that the new Thor will survive the reboot even though her series is officially finishing. I just hope we find out who she is before the event.