It's Christmas in Central City, and we celebrate with a villain team-up. This episode has the feel of an episode of the classic 90s Batman animated series, what with the over-the-top plot (exploding Christmas presents!) sitting alongside a grimmer plotline (Patty faces her desire for revenge against her father's murderer). Plus, the presence of Mark Hamill as the Trickster naturally makes it seem like the Joker's around. (Thought: Jay says they don't have a Trickster on Earth-2. He should have said they have a Joker instead.)

Weather Wizard, despite his silly name and powers, is a cold, heartless individual, and makes a great mirror to the Trickster, who's utterly insane but blessed with a strongly emotional worldview. Alongside them you have Captain Cold, who gets to show his noble side, setting the stage further for Legends of Tomorrow, which will hit early next year. There's some strong development of the Zoom/Wells plotline, and Wally West makes his debut appearance, but the most important thread is Patty's storyline coming to a head as she finally gets some closure. She's still the Iris of this series, the only character kept out of the loop when everyone and his mum knows Barry's the Flash. They really need to sort that out. Otherwise, though, this has been a strong half-season and this was a great episode. 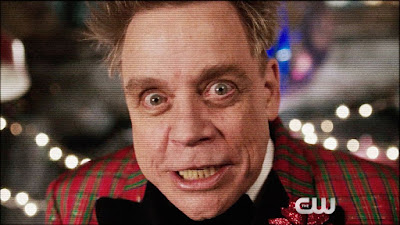 I'm very much enjoying the direction the series is taking, with more focus on Kara's emotional reaction to both current and long ago events. The comicbook fan in me is loving the introduction of familiar characters; Red Tornado was a treat (even if T. O. Morrow was an irritating villain), and then the spectacular reveal that Hank Henshaw is, in fact, the Martian Manhunter. Really didn't see that one coming. Henshaw/J'onzz is a bit glib with his alien identity now the cat is out of the bag with viewers, but still, this was great misdirection for fans, who fully expected him to become the Cyborg Superman as in the comics. (Not that this precludes the return of the real Henshaw, who could well be the Cyborg Supes.)  The "finale" episode has some great scenes, including the various battles between the alien forces and the protectors of the Earth, but any scene involving the Kryptonians actually speaking (either flashbacks to Krypton or Earth events) is marred by stultifyingly po-faced sci-fi dialogue. It really damages the whole episode. Still, at least Non gets an upgrade from mute slab of moron-muscle to an actual thinking, speaking, calculating character. 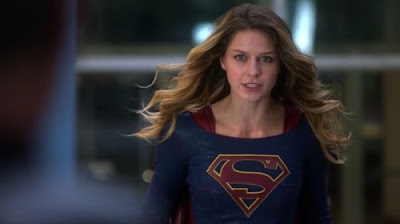 The best parts, though, remain Kara's interactions with her family, friends and team. I like that she's really getting put through the ringer emotionally, and her outburst at her mother's hologram, railing against being abandoned on Earth, is probably the best scene for her in the series so far. Although, the climax of the previous episode, in which she pours all her rage at her life's flaws and injustices, into burning up the Red Tornado, is a close second. I'm also truly loving Cat Grant now, portrayed with cut-glass iciness by Calista Flockhart but with moments of real warmth and humility. Cat could have been just a one-note bitch character, but she's become the highlight of the series. "Hostile Takeover" sees her facing the attempted ousting of Cat from her own company by a hacking and smear campaign, thwarted by Kara and her gang, and it works brilliantly. At its best, Supergirl is a very modern, strongly feminist series, and here it really explores the incredible obstacles women face in positions of power and responsibility, by showing rather than just echoing well-worn platitudes. Oh, and then Cat shows she has more brains than any of Superman's allies ever did, by working out that Kara is Supergirl and absolutely not backing down.
Posted by Daniel Tessier at 10:57