Dandy is invited to a party on an alien planet by his biggest fan. It does not go as he'd hoped. 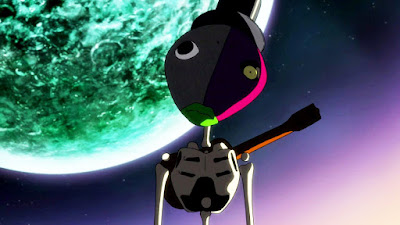 The Ukulele Man: A truly bizarre alien, the Ukulele Man is the only one of his kind. His species is born from a tree on a jungle planet, only one of them existing at any time. Physically, he appears as a skeleton with a wooden face, incapable of expression. The Ukulele Man is desperate to show people the joy and laughter in his heart. By playing his ukulele, he puts his victims into a trance, capturing their smiles forever by turning them into statues. He keeps them in his "smile collection," and occasionally tries on a body to see if the smile suits him.

Capybarians: Humanoid capybaras native to the Ukulele Man's planet. They like to chew, but they seem pretty reasonable.

Mantisians: Vicious insectoids that hatch from pods and chase Meow and QT while they're looking for Dandy.

Wiggians: Even odder aliens that chase the duo, Wiggians look like living toupees and emit bolts of electricity as they hunt for a scalp to call home.

Phenomenology, Baby: The River of Time flows from past to future through the upper atmosphere of the Ukulele Man's planet. A pororoca is a huge wave, caused by tidal forces acting against the flow of a river (the Amazon is prone to these). A large, red "satellite planet" acts upon the River of Time, causing a pororoca in its waters that reverse the flow from future to past. Harnessing the pororoca can allow travel back in ones own timestream.

He's Dandy, Baby: Doesn't take kindly to being made fun of when he misunderstands things, and flounces off when Meow and QT enter him into the Misunderstanding Grand Prix. Which, unbeknownst to him, he wins. He receives a party invitation from the Ukelele Man, who has decided Dandy has the greatest smile in the Galaxy after seeing a picture of him at BooBies. He also misunderstands that, immediately assuming the sender must be a beautiful woman. He does, however, understand the implications of the River of Time, and, enraged by Ukulele Man's treatment of his friends, surfs the pororoca to take them back to a point before they were petrified. Even after battling the Ukulele Man, he shows compassion for him in his last moments.

He's Not a Space Cat, Baby: Starts out the episode in a stupid argument with Dandy over a song rhythm, and then gets distracted long enough for him to leave in the Little Aloha. Once he realises Dandy is gone, he and QT go searching for him at considerable peril.

He's Just a Little Obsolete, Baby: His internet seems to be working well now. He's also seemingly fixed the teleporter - and it has a remote control. Both QT and Meow are captured and frozen by the Ukulele Man.

There's Bad Guys Too, Baby: Dr. Gel is infuriated by Dandy's continual escapes, and decides to use the River of Time to turn back the flow of history and capture him at an earlier point, turning a defeat into a victory. He really just misses his mum, though.

The Bottom Line, Baby: The perfect balance between strange, funny and touching, this is a cracking adventure with a memorable one-off villain. One of the best episodes of the second season.

The search for dinner leads Dandy and co. from a bustling alien food court to a bizarre adventure on a distant planet.

He's Dandy, Baby: Wastes his money not on food but on a Mr Teleporter, which he only buys because the vendor is a hot girl. While fighting with Meow, he accidentally beams his head to the planet Pushy Boyfriend. When under threat from the ray's a burning sun, he's more worried about losing his hair than being killed.

He's Not a Space Cat, Baby: Despite his continual protestations that he's not a cat, Meow really loves fish. He spends the entire episode complaining that he's hungry, and the sight of Carpaccio sets him drooling (he's a revolting drooler, just like my cat). He works out that reflecting the teleporter's light allows him to beam himself with the teleporter instead of leaving it behind.

It's Tech in Space, Baby:

Mr Teleporter: a handy matter transmitter that works like a flashlight. It emits a beam which transmits whatever material it shines upon, meaning that someone can easily beam their head to another planet and leave their body behind. Thankfully, the parts stay attached through whichever higher dimension the teleporter utilises. Although it has a tremendous range, it has poor battery life and uses batteries which are almost impossible to find in the civilised galaxy.

Pushy Boyfriend: A green planet, covered in holes which lead to caves that cross right through the body of the world. These caves were created when a gigantic tree took root in the planet, but it was incinerated when the planet's thousand-year orbit took it too close to its sun. A giant invisible halibut swims beneath the planet's surface. Carpaccio, its lone sentient inhabitant, rides a plume of water from Pushy Boyfriend to the surface of...

Girlfriend: Pushy Boyfriend's equally oddly-named sister planet, Girlfriend has a lower gravity and has been pulled into Pushy Boyfriend's orbit as its satellite. Ten years on Pushy Boyfriend corresponds to a century on Girlfriend, which has become arid as it approaches the giant sun. The fishy natives have moved to underground cities, leaving only salt deposits on the surface.

Carpaccio's species: they're fish. Carpaccio is the first of the race to leave the planet Girlfriend and encounter aliens, and so he qualifies as a genuine unregistered alien, potentially worth a ton of Woolongs. Carpaccio's language is unknown so the translator struggles with it at first, and he attempts sign language, which doesn't much help. In the hundred years that Carpaccio has been gone, the civilisation has grown indolent and vain, and refuse to listen to Carpaccio's warnings. The entire species goes extinct, with Carpaccio killing himself by stepping into the blazing sunlight. So Meow and Dandy eat him. 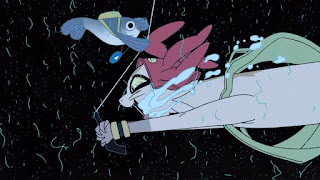 There's Bad Guys Too, Baby: Dr. Gel and Bea locate Dandy (probably using his handy GPS) but are incinerated in the sun's rays.

Don't Quote Me, Baby: "Good things come to those who just chill."

The Bottom Line, Baby: Just utterly weird. Not quite as weird as the surrealist plant episode from season one, but still very strange. The artwork is oddly scrappy, and the English dub doesn't include Carpaccio's dialogue before the translation. There are only Japanese subtitles unless you turn the regular English subs on for everything. If  not, you'll have literally no idea what's happening for the first ten minutes. As always, this leads to some fun differences between versions:
Sub - "It still weighs like 100 kilograms!"
Dub - "It still weighs like as much as a freaking panda!"
At one point, Dandy beams various parts of himself into different locations on planet Girlfriend, leaving his scalp to crawl around on its own, like the spider-head in The Thing.
Posted by Daniel Tessier at 13:27