Sun's out, guns out (and hold the door)

There's been a marked upturn in the quality of my weekends lately. No more twelve hour shifts, rather more sunshine and pub lunches. Weekends spent with my lady Suzanne, catching up on superhero shows and comedy nights. It's actually been pretty good. I'll remember to reread this when it's not feeling so great.

This weekend just past, although I had to work Saturday morning, I then immediately head off to Brighton for the Brighton Film and Comic Con. It's the first one I've been to, and, to be honest, I was glad when I heard it was a poor one. It was OK, but nothing special. It lacked atmosphere. I'm a little dubious about how conventions work anyway. Famous people sit down and wait for geeks to pay to meet them. It's a good moneymaking scheme, I guess. I'm much more up for the talks. Working meant that I missed Chris Barrie's talk, and Suz managed to get a chat and handshake off him (but that serves me right for not taking her to see Red Dwarf XII being filmed). I did get to meet Brightonian legend Robert Rankin, which is always a pleasure. And briefly Sylvester McCoy, who was pretty grumpy and unapproachable because I didn't have twenty quid for an autograph. Then again, Peter Capaldi is charging $100 Stateside.

However, we did see this guy

I'm not even a big Game of Thrones fan, but Daniel Portman and Christian Nairn were brilliant in their talk. Daniel in particular was hugely entertaining. They answered some of our questions, and we kind of met them briefly on the way out. We think they should have a chat show - or a flatshare sitcom.

In the evening, I caught up with my friend Steve, former quizmaster of the Geekest Link and all round good egg. I chatted with his good friend Tom de Ville, who's a screenwriter for such series as Urban Gothic, Hannibal and Stan Lee's Lucky Man. He also wrote the original script for The Quiet Ones. He had some interesting things to say about the industry, and was a very nice gent too. It was a very fun night altogether.

Sunday was blazing hot, so Suz and I went down to the beach to catch up with some and get sunburnt. In the afternoon, Samantha Pressdee had organised a Free the Nipple rally. It was a bit of fun to get a point across - it's a hot summer's day and every other bloke was wandering around half naked, whatever the state of him. But if a woman has her top off, it's not only frowned upon, she could be arrested for exposure. It's ludicrous. It was a good event; there were quite a few of us, a good mix of different sorts of people, and we pocked up recruits along the way. I wasn't to keen to see a couple of skinheads there, but they didn't cause any trouble. I'll admit it was good to see lots of attractive ladies with their tops off, but once we were all together and walking along, it didn't feel sexual at all. Just very comfortable. There were a few pervs out, of course, and being Brighton, there were as many old dykes taking snaps as old men. Only one woman reacted with disgust, actually covering her son's head with a scarf so he wouldn't see "the naked people."

It was also good for me and Suz. We're both pretty unconfident and sensitive in our bodies, so going topless in public was daunting for both of us. It felt pretty great, even if my pasty white torso did get singed. There are a few pics going round, although the local paper is trying to find some without nipples, which just goes to show, really.

If you look closely you can spot us. 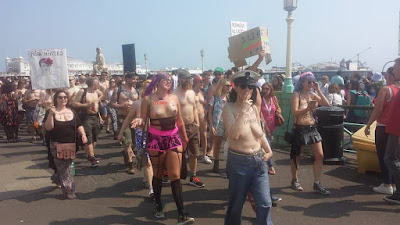 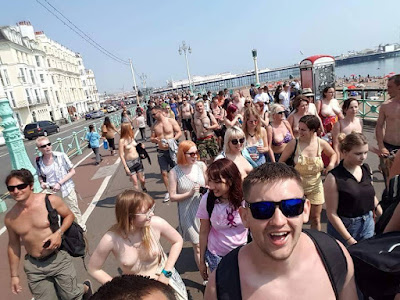