Red Dwarf comes back with a bang in "Twentica," the first of twelve episodes that will be broadcast over the next two years. Part of Red Dwarf's appeal and success is its ability to change and embrace different styles of story. Series ten embraced the best elements of the show's various styles, combining outright sci-fi adventures with odd couple sitcom style. When it got it right, it was spot on. The eleventh series begins with an episode that sits on the sci-fi side of the spectrum, as much as anything in the highly regarded fourth and fifth series (which included such contrived environments as the Waxworld of "Meltdown" and the Psi-Moon of "Terrorform"). "Twentica" is perhaps most similar to series seven's "Tikka to Ride" or last series' "Lemons" - a one-off excursion to Earth's history through yet another means of time travel. In fact, "Tikka to Ride" is the best comparison from the series' past, with "Twentica" also taking place in a version of America altered through time travel. 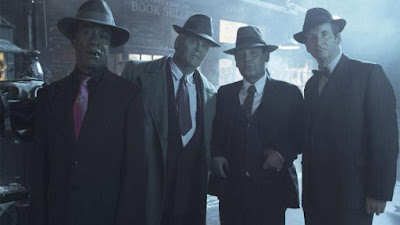 The difference is that the alternative America seen here, while a dystopian setting, is played predominantly for comedy. It's a fantastic idea; a version of the twentieth century where any technology beyond the level of the 1920s is outlawed. A Prohibition Era episode of Red Dwarf is a great idea in itself, but twisting it round to make it an anti-technology setting is an inspired idea. Indeed, it seems wasted on a mere twenty minutes of screentime. This could easily have been the setting for a two-parter, or even a full season of episodes. (Perhaps, if we ever got a fifth Red Dwarf novel, Doug Naylor could explore this world in more depth?) Part of the cleverness of the idea is that it automatically makes Rimmer and Kryten illegal by their very nature, although this isn't explored very much. However, some of the episode's best moments occur in the brilliant "science speakeasy" scenes, where former scientists go to indulge in their proclivities under cover of drinking and dancing. Naylor takes the joke just far enough, and the climactic scene is brilliant. 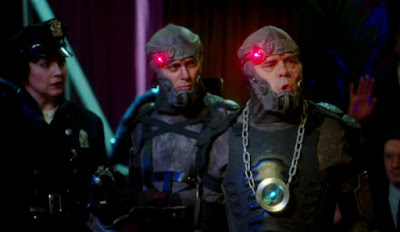 All the regular cast get a moment to shine, with a strong emsemble feel to the episode. This is a wise choice for a series opener, especially as we seem to have episodes coming up that are more heavily based on one character. I've got to say, all the boys look great in their Prohibition-style gear (but then, what man doesn't look better kitted out like that?) In fact, the episode as a whole looks amazing. Dave, along with new co-producers Baby Cow Productions, are clearly spending more money of the series after the success of series ten.

This extends to hiring a great guest cast. Lucie Pohl stands out as Harmony de Gaulthier, and veteran actor David Sterne as Bob the Bum (aka not Einstein). The best addition to the cast, though, is Kevin Eldon. He's one of those actors it seems odd hasn't been in the series before, but then, the main part of his career has been in the years that Red Dwarf was off air. Here he gives everything as Four of Twenty-Seven, leader of the Exponoids, a new variety of Simulant armed with time travel. As well as an ingenious opening scene that embraces the twisted logic of time travel, the Exponoids turn up throughout the episode to pose a threat and squabble. They're essentially a bitchy version of the Borg and provide laughs and peril in equal measure.

The plot does seem to be cut a little short, but the episode as a whole is a success, with some real laugh-out-loud moments. It does seem, though, that Naylor didn't think the full logic of the premise through. Although the Exponoids are defeated, they've still altered history, and there are potentially a few bits of Starbug left in the twentieth century. Either this is a big oversight, or there will be some repurcussions further ahead. Then again, Red Dwarf's timelines never did make much sense. 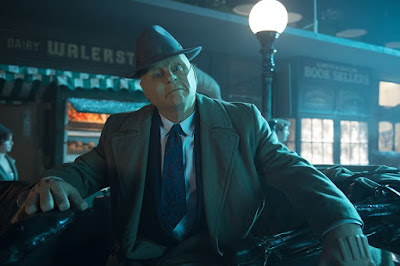 Title-Tattle: "Twentica" is an odd title, to be sure. It's never explained in the episode, and it presumably refers to the Twenties-style alternative America.

Time Travel: In "Twentica," an Exponoid device called "Chronos" which allows time travel, and creates a vortex through which Starbug is drawn back in time. Previously, the Dwarfers have time travelled via a stasis leak rift ("Stasis Leak"), mutated developing fluid that created magical photographs ("Timeslides"), a time hole ("Backwards"), a malfunctional rejuvenation shower ("Lemons") and a 29th century time drive (in "Out of Time," "Tikka to Ride" and "Ouroboros"). Not to mention the time distortions they experienced in "Future Echoes," "White Hole" and "Pete," plus the pseudo-time travel in "Back to Reality," "Gunmen of the Apocalypse" and Back to Earth. That's an awful lot of time travel by many different means.

Best Line: "What happened to your head?"
"...I went bobbing for apples in a cement mixer!"