Comics to Screen: Legends of Tomorrow 2-2 - The Justice Society of America

Catching up with Legends, and the second episode is a slightly more serious, but generally just as fun and silly as episode one. It's wonderful that a franchise that began with the Dark Knight-eqsue grim realism of Arrow season one has advanced to the point it can include a team-up with a 1940s superhero team to fight a Nazi hulk. Making the JSA a super-secret society helps with some of continuity issues of having a superhero team active decades before Arrow started, even if it is a bit hard to swallow. But none of this matters, when we have such great scenes as the Legends getting their asses thoroughly handed to them by the JSA, with Dr. Mid-Nite, easily the coolest member of the team, doing the full sonar-vision battle that he perfected years before Daredevil. I particularly love their low-tech outfits. Stargirl, in particular, looks like nothing so much as a sexy cosplayer (I must point out that this is in no way a bad thing). If she reappears, though, please may we also have her giant robot sidekick, STRIPE?

The undoubted highlight of the episode has to be Victor Garber flexing his vocal cords as Stein performs "Edelweiss" in a Nazi nightclub. The showrunners had better find some way of brigning him into the upcoming musical crossover with The Flash and Supergirl. Time-travellers fighting Nazis is a sure-fire recipe for a fun episode. There are plenty of effective moments throughout, and all the remaining Legends get a strong moment, with the exception of Rory who barely gets to do anything at all. Ray Palmer again shows he's at his best under extreme pressure (i.e. in captivity under threat of torture), the Stein/Jax relationship is played better than it has been in the past, and Sara Lance proves perfect for the position of new team leader having finally developed into a rounded and entertaining character.

The episode also acts as the required origin story for Nate Heywood as the new Steel. Nick Zano gives a sympathetic turn as the haemophiliac historian, out of his depth in a team of assassins and superhumans and overwhelmed at the prospect of meeting his legendary grandfather. The sequence of events unrolls with predictability, but that's not always a bad thing. These story beats work and it's fun to follow along, knowing where it's heading. Also impressive is Maisie Richardson-Sellers as the new (old) Vixen, set up to become a series regular. She has some good chemistry with Brandon Routh's Ray Palmer and it'll be interesting to see how the relationship between the teams develops, especially as Vixen presumably suspects the Legends are responsible for Hourman's death.

As readers of my blatherings will know, I love all this time travel stuff, and it's not coincidence that this episode openly references Back to the Future (in the same week as The Flash was, no less). Nate's past slowly disappearing after his grandfather looks certain to die is straight out of that movie. Completely nonsensical, of course, but narratively sound. Quite why ongoing villain Thawne is trying to so drastically alter his own past is a mystery, though - if the Nazis have access to supersoldiers, his civilisation will surely never come about. Just possibly we'll get some logical answer to this as the series carries on, although I'm not optimistic on that front. 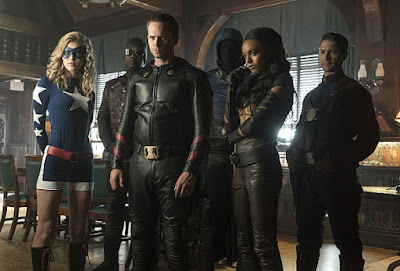 The History of the JSA

The Justice Society of America was the first ever superteam, giving rise to the later Justice League and similar teams such as the Avengers. The Society made its first appearance in All Star Comics #3 at the end of 1940, featuring a bunch of superheroes from across the publications of National Comics and All-American Publications in what was a groundbreaking team-up. The original team-up consisted of Dr. Fate, Hourman, the Atom, the Flash, Green Lantern, the Sandman, the Spectre and Hawkman, many of whose modern equivalents continue as some of DC's longest-running heroes. I can only imagine how exciting this was for the kids reading comics back then. 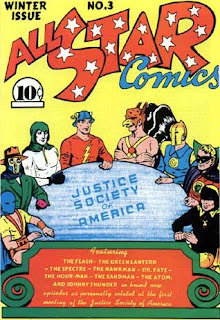 Early on, characters with their own titles weren't permitted to appear in All Star Comics, so Superman and Batman were considered honorary members, with Green Lantern and the Flash leaving active team duty as they hit the big time. The exception to this rule was Wonder Woman, who appeared in issue 11 as the JSA's secretary, before eventually taking an active role in adventures. The inclusion of characters from the different companies varied a little over the years before National and All-American amalgamated to form Detective Comics Inc. Dr. Mid-Nite and Starman joined the team in issue 8, Johnny Thunder in issue 6. The JSA's archenemies, the Injustice Society of the World, debuted in issue 37, and the Black Canary joined the team four issues later.

The JSA disappeared as superhero titles were phased out over the years, but returned during the resurgance of the Silver Age. The Jay Garrick and Barry Allen versions of the Flash teamed up in 1961's The Flash #123 - "The Flash of Two Worlds" - which introduced the idea that the JSA existed on Earth-Two. This led to team-ups between the Society and the League across the two Earths against major threats throughout the sixties. The JSA members were expanded to include Quality Comics characters after DC's acquisition of the rights, and were presented as older, more experienced superheroes in contrast to the JLA. Later crossover events changed the nature of the DC universe, with the JSA becoming earlier heroes of the main continuity in some versions, and an Earth-Two team in others. Some versions included older versions of Superman, Batman and Wonder Woman, while others introduced equivalent characters.

The JSA vanished for some time before being reincoroprated into continuity during the various shake-ups, but they generally remained as older, WWII heroes in most iterations. The New 52 impression had the Earth-2 title, in which alternative versions of Batman, Superman and Wonder Woman had been killed, leaving the JSA behind to defend their Earth. Perhaps the most well-known modern interpretations of the JSA have been on TV, with appearances in the latter seasons of Smallville, or as the veteran crew in the animated Batman: The Brave and the Bold. There have been many members of the Society over the years; the Arrowverse team features Hourman, Commander Steel, Obsidian, Dr. Mid-Nite, Stargirl and Vixen. Of these, only Hourman and Dr. Mid-Nite actually date back to the 1940s.
Posted by Daniel Tessier at 10:34