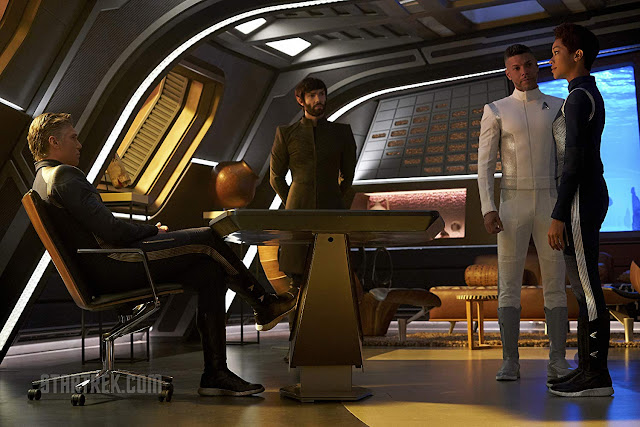 It's the episode with the answers, or at least, a fair few of them. After last week's surprise revelation of the Red Angel's identity, we get an episode that is essentially dedicated to Michael's relationship with her mother. The writers have an amusing take on the two of them, with Gabrielle being just as stubborn and self-important as her daughter. It's also pretty funny that, after Spock thinking it was all about him, it turns out to be all about Michael, only for it to be all about her mum... then it turns out to be about her after all. Gabrielle, thrown 950 years into a desolate future, has twin missions across space and time: stop Control to save the Galaxy, and keep Michael safe.

Not that she admits this last bit for a long time. Perhaps she wants to make it easier on her daughter by being a bitch so that when she has to leave it doesn't hurt so much – exactly the same thing that Michael did to Spock back at Vulcan's Forge. In the end, though, these events are a healing process for Michael's family, with her relationships with both Spock and her mother mended. Sonequa Martin-Green gives a great performance here, and her chemistry with Ethan Peck is perfect, but it's really Sonja Sohn's episode. She's got the perfect voice for dropping in from the future to make grand proclamations of doom. She's a kind of female Morgan Freeman.

Less convincing is Michael's other mother, Evil Georgiou. I'm actually enjoying the character more and more as the season goes on, as Yeoh has reigned her performance in, but nonetheless, the character's shift from grand mistress of the universe to Michael's champion is unconvincing. And Michael already has a guardian angel, after all. Still, we do get some spectacular martial arts from Yeoh as Georgiou fights the Controlled Leland, in a Matrix-styled battle on the planet's surface. It's exactly what you hire Michelle Yeoh for, after all. Why put her in a black catsuit if you're not going to have her go all space ninja on a cyborg's ass?

Controlled Leland is great, with Alan van Sprang making the Section 31 leader just a little more sinister, a little more robotic than usual. It's totally believable that it takes a while for Georgiou and Tyler to realise he's not quite right, since he's such a cold bastard at the best of times. Once they do realise, and team up against him, both agents work better than they ever did when they were at odds. Georgiou and Tyler, it turns out, make a really effective team.

There are some logical flaws in the episode, or rather, it extends logical flaws from earlier in the season. The crew had come to the conclusion that the Red Angel was from the future because its technology was too advanced to be explained otherwise, yet it turns out that Gabrielle created it twenty years ago. While Section 31 has displayed tech that's further ahead than the rest of Starfleet, it's still a daft contradiction. (Unless the inference is that the Angel was created using future tech, in some kind of paradox, like Control itself, but that's never made clear.) The revelation that Gabrielle knows nothing about the red bursts is a twist, yet it's just as feasible that she hasn't created them yet, from her perspective. And how does she manage, even given the technology at her disposal, to lift a bunch of people fifty thousand years across space to Terralysium? I do like the idea that the Sphere data is so sophisticated that it can learn and adapt itself, preventing itself from being deleted. No wonder Control is so keen to get hold of it; the Sphere's database is more advanced an AI than Control itself.

In spite of some slightly silly and hard to swallow plot anomalies, this is a decent episode that combines both spectacular action and powerful emotional beats. I don't buy for a second that we won't meet Gabrielle again, even if she is unstuck in time.