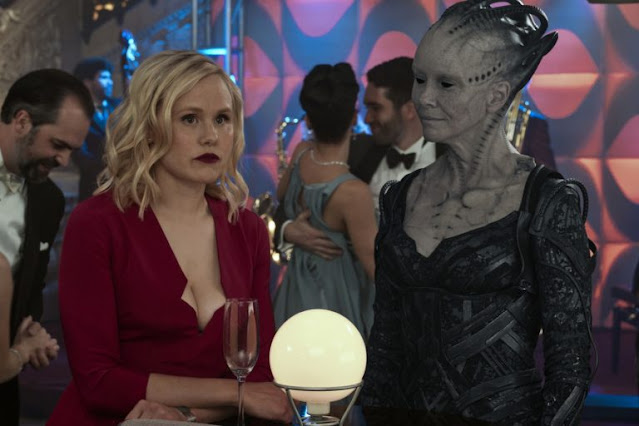 FLY ME TO THE MOON

Picard continues on its way in a muddled but still highly enjoyable couple of episodes that move the season-arc on, giving us as many new questions as answers.

So, who had Gary Seven in their Trek bingo? Not me for one, although there were hints that the mysterious Watcher was linked to that sci-fi secret agent and his unseen “Supervisors.” It's remarkable that Trek has never returned to Gary's employers before (onscreen, at least, they're all over the books and comics), but that's hardly the biggest mystery here. Why does Tallinn look just like a human version of Picard's Romulan ladyfriend Laris? She claims to know nothing about Q, but then, would she be aware even if he had created her as a trap for Picard? It's good to have Orla Brady back, either way. Equally mysteriously, just why is she assigned to watch over Renee Picard, whose importance to the timeline is surely impossible to know in 2022?

Of course, individual people being vitally important to historical events is a common sci-fi trope, even if it does seem to be oversignifying one woman's space mission by making it the crux of future history. We're assuming that Picard is correct in trying to ensure Renee completes her flight to Europa. Could it not be the other way round, and that something she encounters leads humanity to become aggressively anti-alien?

On the other hand, we have Adam Soong, the latest (or rather, earliest) in a long line of Soong men played by Brent Spiner. It wouldn't be Picard without him somewhere, and to his credit, Spiner creates a character who is both reminiscent of his descendants and entirely his own person. It's interesting to see the Soong timeline come together slowly, as Adam's work in human genetics clearly leads to his descendent Arik's work with Augments a couple of hundred years later, before Arik himself switches to artificial life eventually leading his own descendent Noonian to create B4, Lore and eventually Data. All of whom look remarkably similar.

No prizes at all for guessing that his daughter Kore is a flawed clone, and that her genetic disease is the result of some error in her creation. Clearly, the image of this girl is embedded in Data's mind, having been presumably passed down to Noonian, and finally leading to the creation of Soji and Dahj and numerous other synths allied with Inigo Soong. Not a bad way of saving costs – an entire family across four hundred years, all played by two actors. It's a little hard to swallow that Kore has never googled her dad before, although I guess he could have programmed in some kind of aversion to that sort of thing that she's only now breaking. I expect this will be skirted over though.

Now that Q has lost his powers, he's rather wonderfully reduced to putting on silly accents and pretending to be Renee's psychiatrist. He seems dead set on stopping her from joining the Europa mission, but there must be simpler says of doing it. Soong tries to simply run her over, while Q is going about it in a much more Machiavellian way. Are there some kind of rules he has to play by, and if so, why? I'm still not convinced that he's actually in the wrong here – I wonder if he's actually working to prevent the Confederation timeline. Could his alliance with Soong actually be a way to discredit him, to stop him from becoming the influential figure?

The wider team get to have a lot of fun, although the Raffi and Seven storyline doesn't really go anywhere. I like how Raffi has started seeing Elnor's face everywhere. It's first played just after we've met Tallinn, looking inexplicably like Laris, so for a split second we wonder if this really is Elnor recreated. But now, it's seemingly Raffi cracking up. Nonetheless, she and Seven have spent a lot of time getting in and out of trouble just to swoop in and shut down Rios's storyline, although thankfully he reconnects with the good doctor after Picard is injured.

Everyone gives their all to their characters, with Stewart getting to make one of his trademark speeches to Renee, who is portrayed with great character and sympathy by Penelope Mitchell. (Fifty quid says we see her return to play a descendent in the fixed future at the end of the season.) Michelle Hurd gets to bring some real pain to the grieving Raffi, struggling to stay on the wagon, while Santiago Cabrera is at his charming best as Rios becomes ever-more enamoured with the 21st century that Raffi despises. (Got to wonder how he got away with smoking indoors in California though. This really isn't our timeline...)

Orla Brady makes Tallinn into a solid character, even as we kind of just want Laris back, while Spiner, de Lancy and Isa Briones all give excellent work as new players or revised versions of classic characters. The only one of the main cast underserved in these two episodes is Jeri Ryan, who as Seven just doesn't have much to do but react to Raffi and various unlikely plans.

Both episodes belong to Agnes Jurati and the Borg Queen, who are just about one character by the end of it. Annie Wersching continues to impress as a wholly different type of Queen, one who appears to be becoming increasingly human in her attitudes and personality as she spends more time disconnected from the hive and reconnecting with Agnes. After her twitching, insectile performance in episode two, Wersching's Queen has developed into a completely new creature. Stealing every scene she's in though is Alison Pill, who brings new depths and desperation to Agnes. It's no surprise that she'd shoot the Queen – we've seen her murder people she cares about far more – nor that she'd break down under pressure, although her misstep in letting herself get partially assimilated is a bit of a foolish moment.

Pill owns the show during the elaborate gala event, literally when she, under the Queen's influence, channels Pat Benetar and belts out a scene-stopping number. While the logistics are a bit hard to take – she's just been taken in as a gatecrasher, and now the band are supporting her with no instruction – Pill is so great it's impossible not to love the scene. Indeed, sashaying through the party as the advance scout, looking absolutely gorgeous while carrying off a performance as someone gradually losing their identity, Pill's is the standout performance of the season so far.

All of Kore's deceased sisters are named after figures from Greek myth. In fact, several are named after the same one: Kore is another name for Persephone, the name of the first girl, and there is also a Prosperpina, Persephone's Latin variation.

Two spacecraft make cameo appearances as the gala/expo/party: Nomad, the space probe from TOS: “The Changeling,” launched in continuity in 2022; and Renee's favourite, the OV-165, a fictitious shuttle that appeared in the title sequence for Enterprise.

This, along with references to treaties outlawing certain types of genetic treatment, make it very clear that this is not our timeline, but one that simply looks a lot like it, and otherwise matches (as best can be expected) various events in Trek history.

After directing two episode, Lea Thompson appears in front of the camera as the head of the committee that slams Soong. Jonathan “Riker” Frakes takes over directing duties for these two eps.