The Doctor Who Project

A quick heads up on some fiction I've been working on lately.

The Doctor Who Project is a Canadian-based fanfiction series that has been running for about twelve years now. Bob Furnell and his team decided to tell stories continuing from where the original Doctor Who left off in 1989. The first couple of stories featured Sylvester McCoy's seventh Doctor, but he was soon regenerated into a new, original eighth incarnation (unrelated to the Paul McGann version). Since then, the Doctor has regenerated twice more - I wrote the penultimate story for the ninth Doctor, who was based on the legendary Basil Rathbone.

The series usually runs in seasons - starting with the 27th (following on from the TV series) and now up to the 37th. However, this year it took a short break, but is now back with a short selection of specials, much in the style of David Tennant's final run on the revived TV series. The stories take the form of novella-length, freely downloadable PDF pieces. The first of the specials, Peace of Mind, is written by none other than yours truly. I won't spoil it, but the story does feature elements of a classic adventure. Also, our new tenth Doctor is based on handsome French actor Vincent Perez. He can be a bit of a git, this Time Lord, so he's great fun to write.

Peace of Mind was originally planned as a summer special, but has been delayed, as these things tend to be, and should now be out in September. It'll be followed by The Mountain of Light, by Duncan Johnson, who's brilliant, and then there's a fascinating-sounding Christmas special in the form of Stromboli's Comet, by Jez Strickely and Jake Johnson.

Next year, TDWP is back on with a regular season - the 38th! - so I'd better get on with writing my next one... 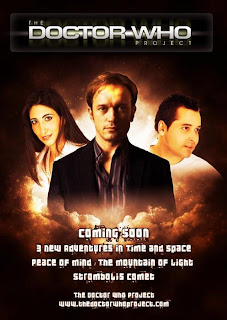