I'd hoped that this was going to be a productive week. Hasn't really gone to plan. Come down with the latest lurgy, plus had to work extra hours to cover those who are off sick at work, so it's all been a bit on the knackering side. My brain doesn't really seem to be in gear. When you go to work with odd shoes on, you know you're not quite with it. When you do it twice, you need a holiday.

So, not much progress made on my new story for The Doctor Who Project, tentatively entitled 'Timebase.' Still plenty of time left till deadline, but I had hoped to get it done good and early so I could start work on some other bits. Ah well. Still, the Project now has a rather marvellous poster up for my story Peace of Mind, the first of the 2011 specials. 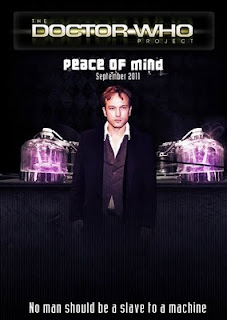 And you can read a little about it here.

Also on the fanfic side of things, E. G. Wolverson has released the second part of his excellent audio story, Wolfshead. Part two, 'All of History's Heroes,' which you can download from The History of the Doctor.  It's the official end of the site now, which is a real shame, but Eddy has a whole world of more important things to focus on now. It's been a pleasure and a privilege to be part of it; and yes, my story for the Wolfshead sequence, 'The Six Pillars,' is one of the things on my ever-growing to-do list.

Doctor Who is back tomorrow. Rejoice!
Posted by Daniel Tessier at 12:54